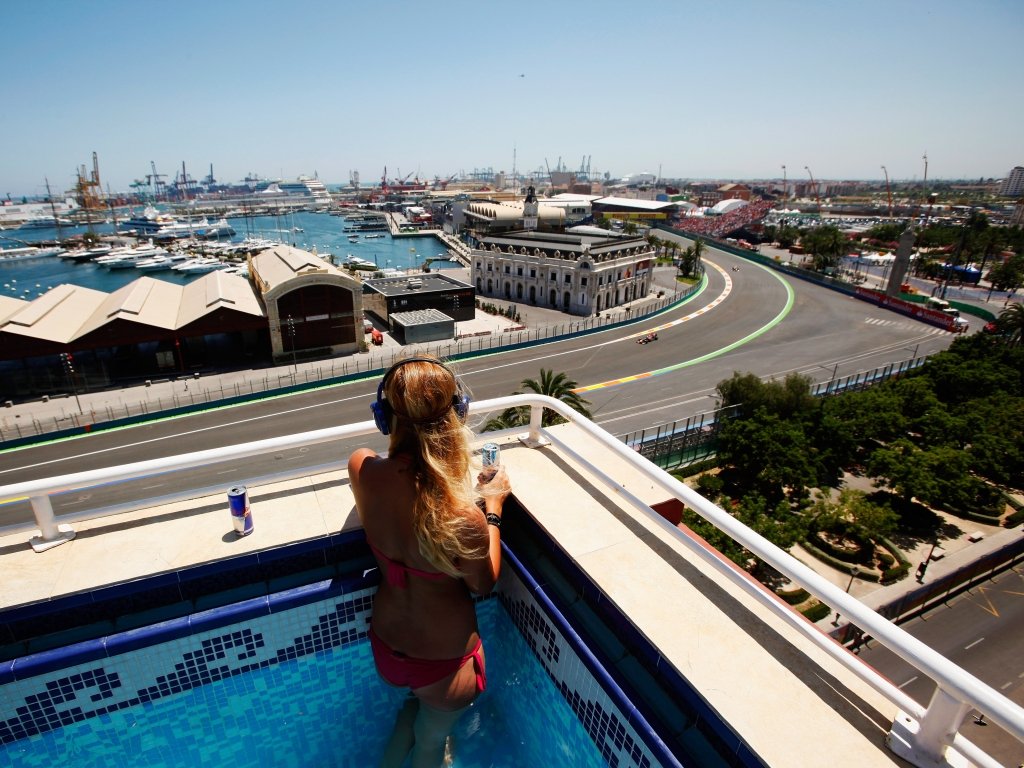 Can we get eight winners from eight races in Valencia? Step forward Michael, Romain, Kimi and Sergio…

The European Grand Prix at Valencia has slimmed down the number of seats available in 2012. Whatever they do with the seats it won’t hide the fact that this is a race with all the ambience of a Lidl car park. But if you like grands prix that race around a port with the odd glimpse of a mothballed Spanish ferry, then this is your baby.

With the advent of the DRS and Pirelli tyres, combined with high race day temperatures, we should have no reason to fear the previously stupifying Valencia Grand Prix. Before, it was the kind of deadly dull processional race that gave F1 a bad name and on everybody’s wish list to disappear next.

Until now, the harbourside circuit of Valencia failed on many different levels. It’s nowhere near as glamorous as Monaco, it’s not as challenging as the street circuits of Singapore or Montreal and it’s not as exciting as a normal race track.

Last year Vettel won a fairly processional race in front of Alonso and Webber with Lewis Hamilton in P4. There were a lot of tyre stops along the way. This year with the cars closer and the tyres less predictable we could have a much more exciting battle.

As the grand prix in Montreal reinforced, the moment heat is applied to the Pirelli tyres, predictions can go out of the window. We are expecting sun and ambient temperatures of 26C, 27C and 29C for Friday, Saturday and Sunday respectively (in qualifying last year at Valencia, 26C on Saturday gave us a track of 44C and the warmest it got in Montreal was 45C). With the hottest day coming on Sunday, the teams won’t be able to emulate the race conditions on (relatively) cooler Friday when they tend to put in the longer runs.

Mercedes failed to cope with the heat in Canada and at a circuit they should have excelled at they were back in the pack. With Valencia being a street track and Monaco being not so long ago, there are high hopes that Michael Schumacher can repeat his Monaco pole position that got shunted five places down the grid.

There is no transgression pending for this race, just the resigned anticipation (a coping mechanism for Schumi fans) that whatever he does there is a 71% chance his car won’t make it to the chequered flag. Now that Lewis Hamilton has clocked up the magnificent seven winners from seven grands prix statistic, it is either Michael, Romain Grosjean or Kimi Raikkonen who can take us to eight in eight.

Or Pedro de la Rosa if you favour a Sky Bet that involves (probably) many thousands to one.

Romain Grosjean is a real prospect and if he can get past the first two laps with his car – and those around him – in one piece then he has shown he can keep his tyres together in hot conditions. Last time out Kimi Raikkonen wasn’t so happy with his steering and then faded after his one and only pit-stop. If we see Kimi ahead of Romain afer qualifying then we’ll know it’s fixed.

The other contender for an eighth winner is Sergio Perez who will probably need to qualify better than he did in Canada if he wants to repeat the podium place. The reason being that in Canada, with the DRS on the long back straight, the minute you were faster than someone you could get past them. That’s not necessarily the case in Valencia and so it may well be that one-stopping cars can get held back. This would allow the quick guys to get in and out in front of them, as happened at Monaco where Raikkonen dropped back and created a space that all the cars in front of him pitted and then rejoined into.

Apart from the yet-to-win-this-season brigade we will have the usual suspects of Vettel, Alonso, Hamilton and Webber jostling to be at the front. Mark Webber in particular will want to be in front of his team-mate and was a lot stronger than Vettel in Monaco. Sebastian got pole here last year, but by this time last year he’d scored seven poles out of seven.

Despite what’s happened in the past, this grand prix could be an interesting battle even if it’s only down to strategy. We had one Safety Car at the start in Monaco, none in Canada, so we’re due for one or two on the streets of Valencia. Safety Cars can wreck strategy and the Ferrari boys will have banged their heads together to make sure theirs is more flexible than last time out. Fernando Alonso said he enjoyed to “toss the coin in the air” to see if he could get the win.

You can’t imagine them doing that two races in a row.