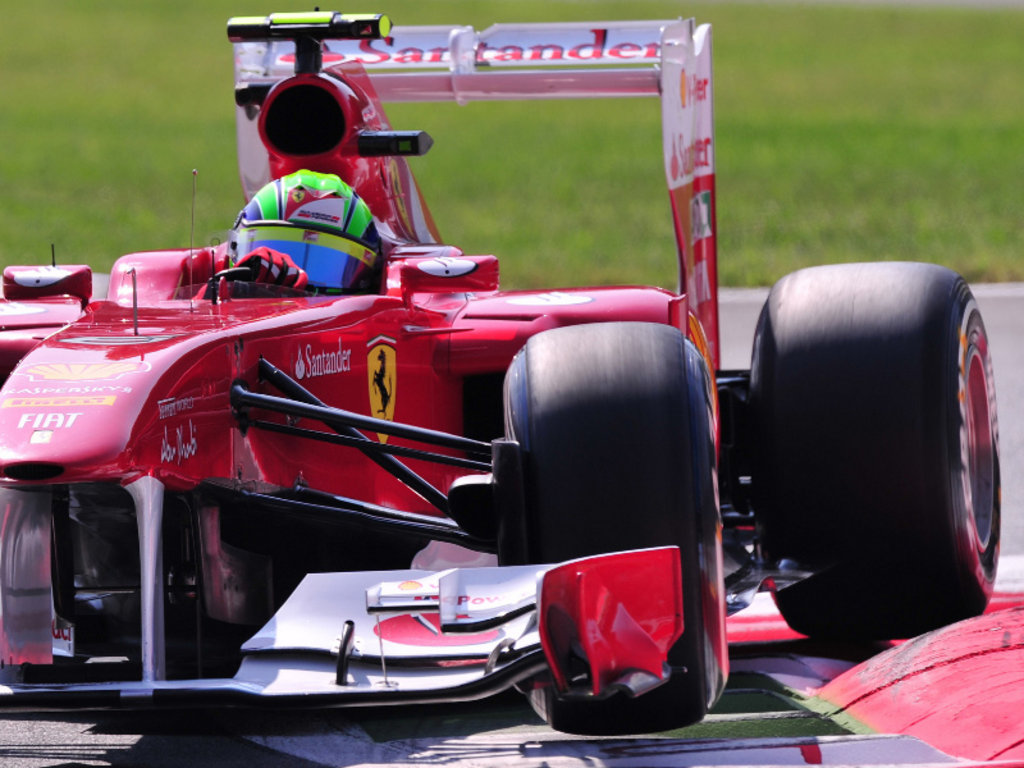 Determined to end the season in second place, Fernando Alonso wants his second win in Singapore while Felipe Massa is still chasing his first…

Determined to end the season in second place, Fernando Alonso wants his second win in Singapore while Felipe Massa is still chasing his first…

Fernando Alonso: “Singapore is a special event for me. It’s one of the races that I like the most for the lively atmosphere and for the characteristics of the circuit. It certainly has much in common with Monaco but the fact that you run at night coupled with the extended length of the track compared to the one in the Principality make this grand prix unique. I have always managed to make the podium in the three previous editions and my objective is to make it four out of four. A third victory to go with those of 2008 and last year would clearly be fantastic but I know that it will be very hard. At Monaco we certainly came very close to victory – without the final red flag I think I would have had an excellent chance to overtake Sebastian – but it’s also true that you can’t always guarantee that things go the same way. What is certain is that we will give everything: I think we have the chance to do well as long as we get the best out of every aspect: tyres, set-up, engine, teamwork, everything has to be at 100%.

“Last year a wonderful success arrived at the end of an extraordinary weekend. There was a long, nearly two-hour duel between myself and Sebastian, which was raced with the image of his car almost permanently in my mirrors. To win a race like that is thrilling, producing very strong emotions. Speaking of the German driver, I’ve been told that some people have written that I said a bad word to him in the immediate post-race at Monza when we were talking about the pass that happened when the safety car came in: it’s incredible to see how far the made-up stories of certain people can travel! Not only did I never say the word in question to him but we chatted about the episode in a very good way, as was clear to everyone during the FIA Press Conference a few minutes later.

“Monza didn’t give us the victory that we wanted but we did earn a place on the podium – what an emotion to stand up there again wearing the red overalls and to hear the tifosi scream my name! That allowed me to pass one important statistical landmark, that of 1,000 championship points (now I’m on 1,001 – only Michael has more). Of course since the new points system was introduced you go forward in this classification much quicker than before but to see four figures next to my name gave me a lot of pleasure.

“I arrived in Singapore today at lunchtime. A shower, a bit of rest in the hotel without sleeping – I want to try and remain on the European timetable – and then a quick trip to the circuit, which is less than 100 metres from the hotel. I like going to the track on Wednesday afternoon at the flyaway races, to see how the team is organised from a logistical point of view. Today I then had the chance to do a bicycle tour of the track together with the special personality that is Emilio Botin, the president of the Santander bank, one of our main sponsors. It’s good to see with how much enthusiasm, passion and interest Don Emilio follows us: despite his thousands of commitments, he knows everything about the life of the team and is very curious, a true tifoso! Tomorrow the official engagements start. As ever, Thursday is predominantly dedicated to meetings with the team and to activities with our partners but there are also the first meetings with the engineers. From Friday we begin on the track: we hope to repeat the weekend of 2010 and thus to present another victory to the Prancing Horse and to all our fans. That is our target, one that will remain for all the coming races.”

Felipe Massa: “Looking back briefly to the last Grand Prix at Monza, I must say there was a fantastic atmosphere throughout the weekend, especially so if you are a Ferrari driver, but unfortunately in a season where the lucky breaks do not seem to have come our way, that trend continued in Italy. It was a shame not to be able to give the tifosi the result they wanted, even if it’s been clear this year that we need more than just a bit of luck in order to win. My Italian Grand Prix was more or less over when Webber pushed me into a spin: I fought my way back up the field to sixth at the end. The car was producing a good enough pace to fight with the guys in front, but once you lose 20 seconds with an incident, your race is over. Monza is always a busy weekend if you wear the red race suit, but it was enjoyable racing in front of the home crowd. I went to the factory in Maranello on the Monday after the Grand Prix and spent Tuesday in the simulator, followed by a PR event on the Wednesday. Since then, I’ve been back home in Monaco apart from the weekend, when we went to a very special event, the wedding of our Team Principal, Stefano Domenicali, which was a very happy occasion.

“Not so long ago, once the Monza weekend was finished, it meant the end of the championship was in sight. This year, that might well be the case mathematically it terms of who will take the titles, but there is still a lot of racing to go, as we are about to set off for the final part. It will be a very busy time, with no less than six races in ten weeks, including one brand new venue in the shape of India. For Scuderia Ferrari, our aim between now and the finale at my home event in Sao Paolo is to win some races. The next round in Singapore has some similarities to Monaco, so that might well suit us and our package quite well, with the cars running in maximum downforce configuration. After that, it’s the back-to-back races in Japan and Korea where even if the tracks are very different, the downforce levels are very similar, followed by India which will be a step into the dark for everyone in the paddock. The last two are in Abu Dhabi, followed by the finale at my home race at Interlagos. There is plenty of variety in these six weekends and hopefully we can good results in all of them. We have to remember however, that at this point in the season, the team’s main focus has to be on the 2012 car, so in terms of new developments, apart from components already planned to be introduced for these races, the pace of development on the 150 Italia will now be reduced.

“For Singapore, Pirelli is supplying the Soft and Supersoft compounds, which definitely suit the characteristics of our car better than the harder tyres and if we had a free choice, these would definitely be the ones we would go for. But tyre choice is only one element of the car package and we will have to work hard if we are going to make the most of any advantage we might have at this race. It’s true our car was okay at the Monaco street circuit, so we can go to Singapore in reasonably optimistic frame of mind. We have