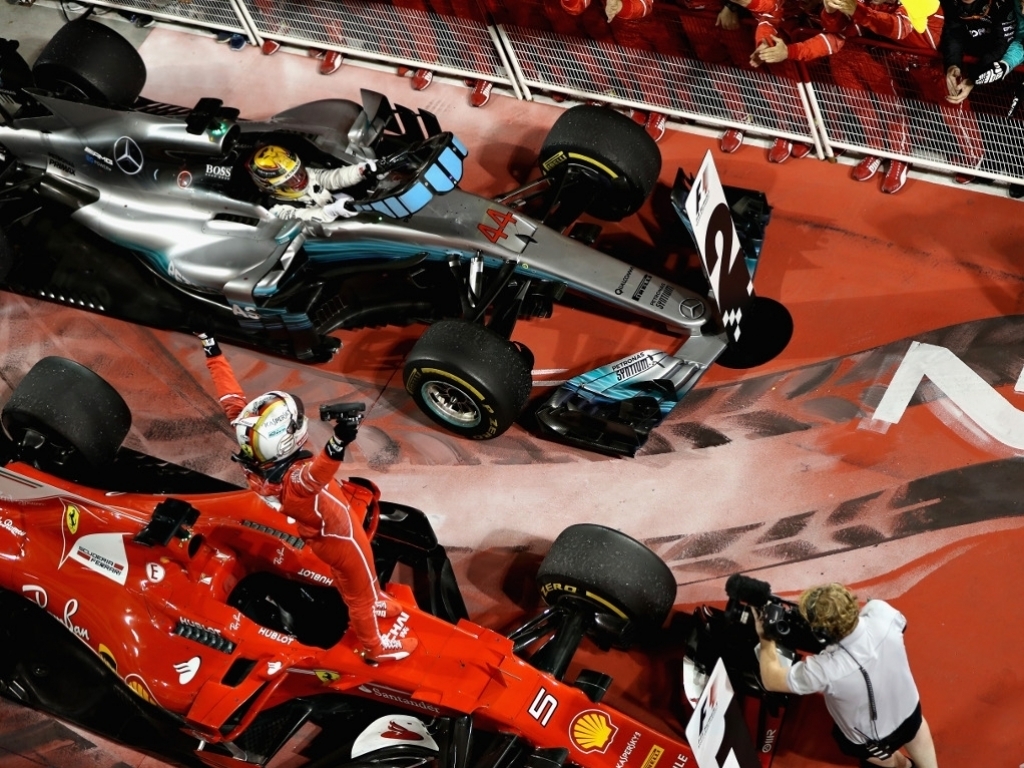 Despite Mercedes’ stranglehold at the Sochi Autodrom, all the talk is of a red revival as Formula 1 heads to Russia with Sebastian Vettel and Ferrari on top of the standings.

Two wins in three races, that’s two more than they managed last season, have changed the dynamics at the sharp end of the grid bringing back memories of yesteryear when the German and Italian national anthems rang out race after race during Ferrari’s Michael Schumacher era.

It has caught the attention of Formula 1 fans, both those who watch religiously and those who slowly switched off over the last three years of Mercedes’ dominance.

It is what everyone, even Mercedes motorsport boss Toto Wolff, admits Formula 1 wants and needs – a closely-contested battle between two of the sport’s heavyweights. And that’s exactly what we have.

Although we’ve yet to see Vettel and Lewis Hamilton go wheel-to-wheel, the intricacies of strategy and tyres have seen the grands prix decided by the smallest of margins, or perhaps best to say, the biggest of decisions.

An early stop for tyres for Hamilton in Australia; Vettel’s pre-Safety Car pit stop in China; and another – but with a different outcome – in Bahrain.

Throw in a rookie error that saw Hamilton penalised five-seconds for holding up the field in the Bahrain pits and it highlights how close this battle is.

“When you screw up, man, it’s painful. There’s no other way of saying it,” said the triple World Champion. “I try to handle it the best way I can, but it eats you up a little bit inside and you’ve just got to end up trying to cope and move forward.”

He added: “In Bahrain there were certain things and if they were perfect, I would have been in a far better position to fight for the win… And I didn’t put myself in that position. It’s only a small percentage, which is what racing should be all about, but we want to operate at the top end.”

One venue where Mercedes have been at the ‘top end’ is the Sochi Autodrom, home of the Russian Grand Prix. The Brackley squad enjoyed 1-2 finishes in 2014 and 2016 while also winning the 2015 race. Added to that they have 100 percent record when it comes to laps led since 2014. It is a sharp contrast to Vettel’s record of only one podium in Sochi.

Swapping Bahrain’s heat for Russia’s cooler conditions is expected to play to the strengths of the W08 meaning this weekend’s grand prix will be Ferrari’s first big test – can they keep up with Mercedes at a track seemingly designed to suit their rival.

Overtaking is not easy on the Sochi Autodrom’s notoriously glass-like surface and neither is it easy with the new 2017 challengers so qualifying will be important, and that remains Mercedes’ powerhouse. Vettel acknowledged that taking Hamilton on the line in Bahrain was imperative to his victory and it will be even more so this Sunday.

But while the focus is mainly on Vettel versus Hamilton, both their team-mates are in need of a good showing. Valtteri Bottas was ordered – not once but twice – in Bahrain to move over for Hamilton and faces a season of ‘number two’ status unless he gets the better of the Brit and fast. The same can be said of Kimi Raikkonen.

Daniil Kvyat, who last season lost his Red Bull Racing seat following a wretched Russian GP in which he collided with Vettel on the opening lap, has two points to his name compared to team-mate Carlos Sainz’s 10 while Lance Stroll needs to get his name on the board and not just in the DNF column.

Red Bull have yet to achieve a Russian GP podium while Force India’s Sergio Perez is one of only five drivers to have ever stood on the rostrum. He’s currently engaged in a tussle with Felipe Massa for ‘best of the rest’ behind the big three teams.

Aside from the intrigue at the sharp end of the grid and the intense tussle in the midfield, the other big question that Sochi may yet answer is who will score first? Sauber or McLaren. And that’s a sad state of affairs for the once championship-winning McLaren team.