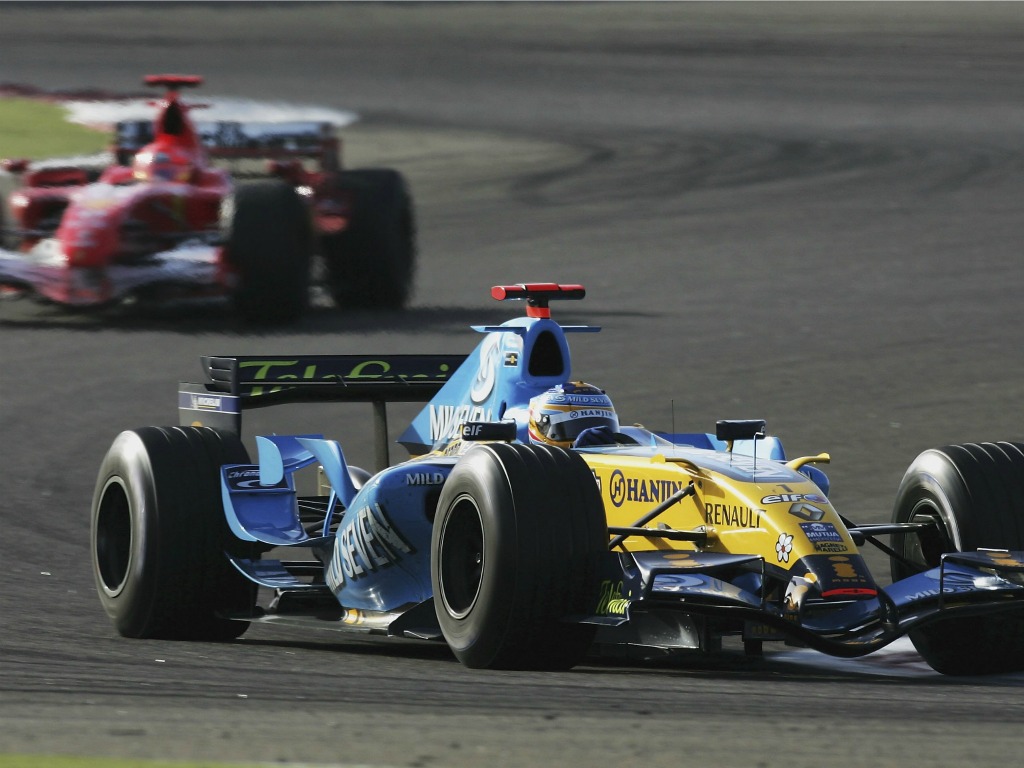 From Michael Schumacher’s historic win to sowing the seeds of Lewis Hamilton’s rivalry with Nico Rosberg, the Bahrain Grand Prix has produced some classic Formula 1 moments since joining the calendar 14 years ago…

Bahrain created their own chapter in Formula 1 history by becoming the first-ever country in the Middle East to host a round of the Formula 1 World Championship. For such a big occasion, it was fitting that the inaugural race in the Sakhir desert was won by the legendary Michael Schumacher.

The 2004 season saw Schumacher and Ferrari re-establish their vice-like grip on Formula 1 after being pushed close by Williams and McLaren in the previous campaign, and the Bahrain Grand Prix played an integral role for the Scuderia to show they were back with a vengeance.

For the third successive race from the start of the 2004 season, Schumacher was able to convert pole position into a dominant victory – the 73rd of his incredible career.

Schumacher clinched pole ahead of his team-mate Rubens Barrichello amid fears of cooling and tyres as temperatures soared to 50 degrees.

But, an unexpected rain shower arrived, causing temperatures to drop and creating the perfect conditions for Ferrari to put on another display of force. Their Bridgestone tyres operating much better than the Michelin tyres of their rivals in cooler conditions.

The German flew off the blocks at the start and was helped by a troublesome wheel-nut on Barrichello’s F2004 car on the first of his three stops over the course of 57 laps.

Schumacher was able to dictate proceedings from then on and coast to victory in a Ferrari 1-2, but the storylines did not stop there.

We also saw the continued emergence of Jenson Button at BAR as he secured the second podium of his career by taking full advantage of Juan Pablo Montoya’s hydraulics issue late in the race and getting the jump on Jarno Trulli in the pit lane.

Also catching the eye was a certain Fernando Alonso, starting from P16 grid for Renault and fighting all the way through to P6.

Schumacher’s victory helped crystallise his strong relationship with Bahrain, having also advised on the construction of the Bahrain International Circuit and having the first corner named after him in 2014. 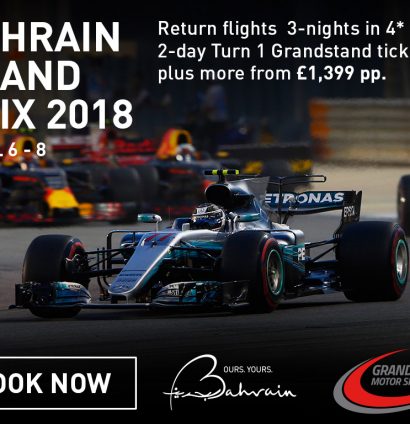 As Melbourne hosted the Commonwealth Games, Bahrain stepped in and provided the setting of the first duel in the desert to kick-off the 2006 season.

In 2005, we were only able to get a little taste of Alonso v Schumacher after the latter suffered his first mechanical failure in years just 11 laps in. But, 11 months later, we were able to experience the full five-course meal.

Alonso, then reigning World Champion, was embroiled in an epic battle with Schumacher as Ferrari looked to reassert themselves as a major force with the aid of the new tyre regulations.

After Alonso narrowly avoided a crash with Felipe Massa when the Brazilian span out of control, he kept Schumacher in his sights until the second round of pit stops provided the heart-stopping moment.

Eyes were glued to the pit-lane straight as Schumacher came flying down toward the first corner, but Alonso re-emerged from the garage side-by-side with his rival and clung on to the inside line.

He muscled Schumacher out of the way and kept his cool in the Sakhir heat to snatch victory by just 1.2 seconds, laying the foundations of a epic title battle which would run all the way through the final race of the 2006 season.

Kimi Raikkonen, then in McLaren colours, came from last place on the grid – a suspension failure ruining his qualifying – to finish on the podium in third and Nico Rosberg started to make a name for himself after recovering from a spin and a pit stop on the first lap to come home in seventh.

Bahrain also played a role in Jenson Button’s fairytale season with Brawn GP as the team formerly known as Honda won both World Championships in 2009.

That Sunday afternoon was supposed be all about Toyota, who locked down the front row of grid with Jarno Trulli and Timo Glock in prime position to give the Japanese manufacturer their first-ever Formula 1 victory.

But a poor tyre strategy would prove to be the main downfall for both of Toyota’s drivers, creating a golden opportunity for Button and Brawn to continue their dominant start to the season.

Button crucially passed his fellow Brit Hamilton on the second lap, which allowed him to keep the Toyota cars at arm’s length and then fly past both as he completed a longer first stint.

Vettel, also looking to get into contention, stayed out even longer but was ultimately unable to pass Trulli until the second round of pit stops had been completed.

It was too late for Vettel to hunt down Button, who would go on to win six of the first seven races of the 2009 season – including Bahrain – to finally realise his dream of becoming World Champion. 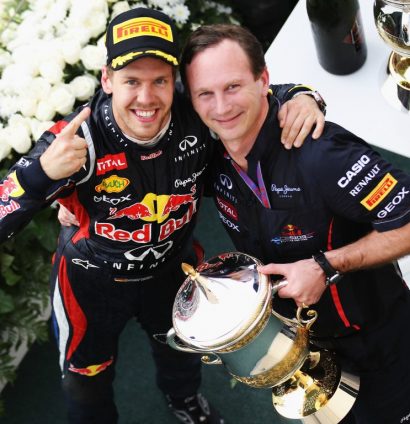 After an exhaust problem robbed Sebastian Vettel of a deserved Bahrain victory in 2010, the German finally got his reward two years later in the most memorable Formula 1 season in recent times.

Starting from pole and leading on all laps apart from when he made his two pit stops, it appeared to be a trademark win for Vettel. But, that was far from the case.

Raikkonen, in only his fourth race back in Formula 1 following a year of rallying and NASCAR racing, was a man on a mission from P11 after getting a sweet tune out of his prime option tyres.

The decisive moment came on lap 36 when ‘The Iceman’ launched an attack down the inside of Vettel at the first turn. However, Vettel stood firm and saw off the spirited challenge from Raikkonen and secured a narrow lead until the finish.

What made the 2012 Bahrain Grand Prix even more remarkable was the fact that it was the first time since 1983 that four different teams had won the first four races of the season and it also helped cement Vettel’s lasting legacy in Formula 1.

Bahrain was the first of five crucial victories that enabled Vettel to become only the third driver ever to win a World Championship hat-trick after Juan Manuel Fangio and Michael Schumacher, as well as become the youngest-ever triple World Champion.

Under the stars of the Sakhir desert, Bahrain hosted its first-ever night race in 2014, and the surrounding darkness was the perfect setting to compliment the brooding tension between Lewis Hamilton and Nico Rosberg at Mercedes.

After missing out on pole position, Hamilton wasted very little time in snatching the race lead out of his team-mate’s hands.

The Silver Arrows duo would briefly switch positions again on laps 17 and 18 but Hamilton’s valiant defence ensured he had precedence on tyres at the first pit stops.

With Rosberg switching to harder tyres, Hamilton was able to pull out a 9.5 second gap in front but, with the added dynamic of tyre options being reversed for the second and final pit stops, a late Safety Car condensed the race down into a thrilling 10-lap showdown between the pair.

Rosberg, now on the softer tyres, was in prime position to get the better of Hamilton on the harder prime tyres, yet Hamilton simply refused to yield in a dramatic wheel-to-wheel battle.

Hamilton would repeatedly cut back inside on Rosberg before winning by a mere second, giving us all a flavour of what was to follow between the former friends over the following years.

It’s not just about the racing…

Along with the Bahrain F1, visitors can also team their race weekend with a journey into Bahrain’s rich history and culture. Visit Qal’at al-Bahrain, a 5000-year-old fort and one of the kingdom’s UNESCO World Heritage sites.

Follow this by wandering through one of the traditional souqs, breathing in the aroma of spices and haggling over souvenirs, before heading to Block 338, a trendy quarter filled with restaurants, cafes and art galleries.

The adventurous can also try their hand at pearl diving. Historically, Bahrain was the centre of the world’s pearl trade with Bahraini pearls considered the best in the world. Today you can explore the treasures in Bahrain’s turquoise waters for yourself – any pearls you do find are yours to keep forever.

Book your unique adventure to Bahrain with Grandstand Motor Sports

– See the spectacle of Formula One under floodlights in the desert!

– The first night race of the Formula One calendar takes place in Bahrain. Discover a unique F1 race on an island kingdom that is bursting with authentic Arabian hospitality, heritage and contemporary entertainment offerings.

More information can also be found on the Bahrain calendar website. 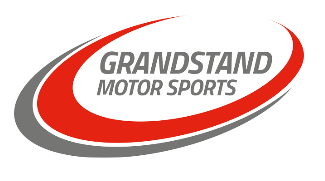