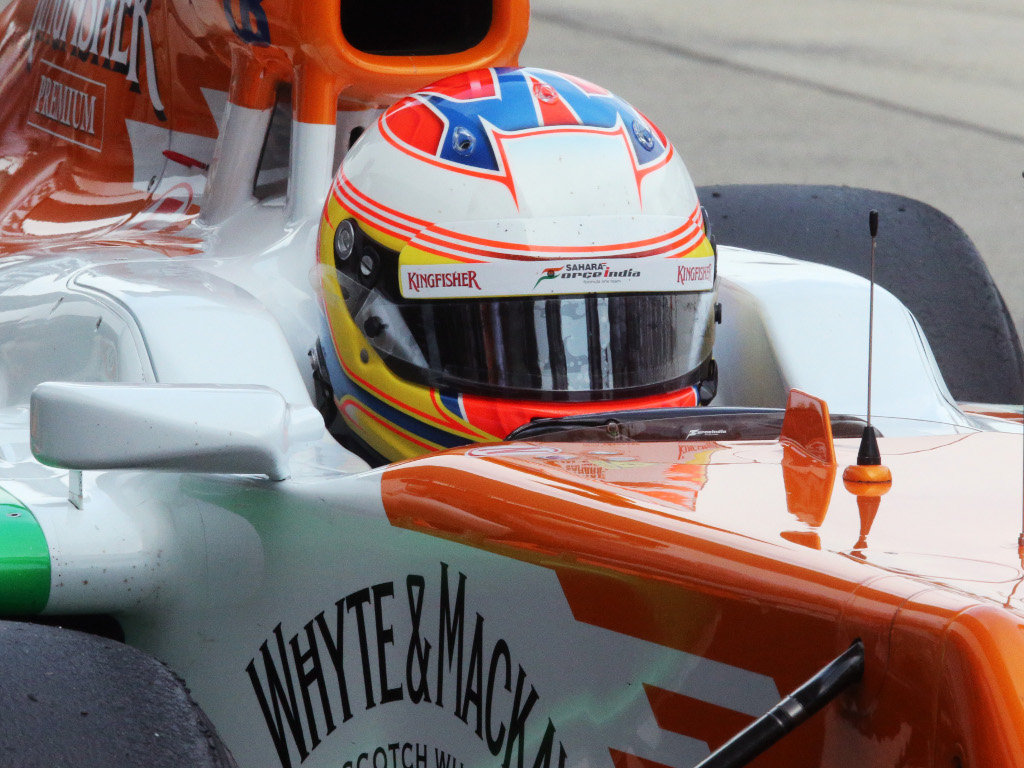 Q. Nico, how special was it to pick up points at the team’s home race?
NH: “It felt really good and I think eighth place was as much as we could really hope for from that race, especially when you remember that I was twelfth on the grid. At the end of the race when I stopped in front of the grandstand I could see the fans going crazy and cheering for me. That was a special moment.”

Q. Once again you showed the strength of the VJM05 with consistent race pace…
NH: “Because I made such a good start I was up there in contention for points and able to run in clean air once I got ahead of Perez. The first half of the race was a bit quiet for me because I was running on my own, but the final few laps were tough because Grosjean was pushing me hard. So overall a strong car performance, a great team effort and I think we should be happy with what we achieved.”

Q. What are your thoughts ahead of Abu Dhabi this weekend?
NH: “I think Abu Dhabi should suit us a bit more than India. It’s a twisty circuit with more low-speed corners and it’s a bit more like Singapore, where we looked quite competitive. So I’m optimistic going there.”

Q. Paul, it was quite a frustrating race for you in India. Do you feel the team can bounce back this weekend?
PdR: “That’s certainly the plan and the whole team has been working hard to try and understand the issues we had in India. We’ve seen some things in the data so hopefully we can get on top of them and back up to speed right from the start of practice on Friday.”

Q. Can you talk us through the Yas Marina circuit and the main challenges of the lap?
PdR: “It’s a very technical circuit with a lot of tight, low-speed corners and you need to be very precise with the car. There’s very little high-speed stuff, apart from the esses after turn one, but they are taken pretty much flat anyway. There are definitely some similarities with Singapore in terms of the number of low-speed corners.”

Q. What are your targets for the remaining few races?
PdR: “Abu Dhabi is a crucial weekend for us. The car was quite strong there last year so there’s every reason to believe that will carry over into this year. Also, it’s the sort of track that has suited us this year so hopefully we can maximise things and get both cars in the points. If we want to get close to Sauber that’s what we need to do. We need to make sure we have a strong run through until the end of the year.”

Q. Dr Mallya, the team scored points for a second consecutive year in India. Were you satisfied with eighth place?
VM: “Absolutely – given where we qualified and the cars ahead, I think we did well. It was the maximum we could hope to achieve. Nico overtook a lot of people on the first lap and it was a very good performance by him. He’s a very talented young man. Paul was not very happy with the car on Friday or Saturday and it never really got any better. He did the best he could but it took a lot of time for his tyres to come in and that’s what we’ve struggled with all weekend.”

Q. The team scored points for a sixth consecutive race. Is it encouraging that the car is competitive at every type of track?
VM: “It is very encouraging. But as encouraging as the eighth place finish at home is, it’s also disappointing that we were not in Q3 with both the cars on Saturday. I think that in terms of competitive performance we’ve come a long way and we are a genuine Q3 contender. To qualify only 12th and 16th was a bit of a disappointment.”

Q. What did you make of the Indian Grand Prix second time around – were you pleased with the improvements?
VM: “This year all those little teething problems from last year had been fixed. The rough edges have been smoothed and as an overall package I think it has got to be one of the best tracks in the world now.”

Q. Can you still catch Sauber in the championship?
VM: “We have 93 points in the bag, but we are still 23 short of Sauber. It’s a big task to catch them, but anything can happen. We’ve finished fourth twice and we were very close to a podium in both of those races. If we get a bit of luck in the last three races we might be able to make it up. 23 points is not uncatchable.”

Q. Nico Hulkenberg will be leaving the team at the end of the season – have you enjoyed working with him?
VM: “It has been a pleasure to have Nico with us for the last couple of years. At the end of 2010 we identified him as a star of the future and it has been rewarding to watch him develop his racing skills. Together with Paul he has done a brilliant job for us, helping the team score more points than ever before and giving 100% commitment every weekend. We would like to thank him for all his hard work and wish him well for the future. With three races remaining this season, we know Nico will remain totally committed and continue to deliver his best performances for the team.”