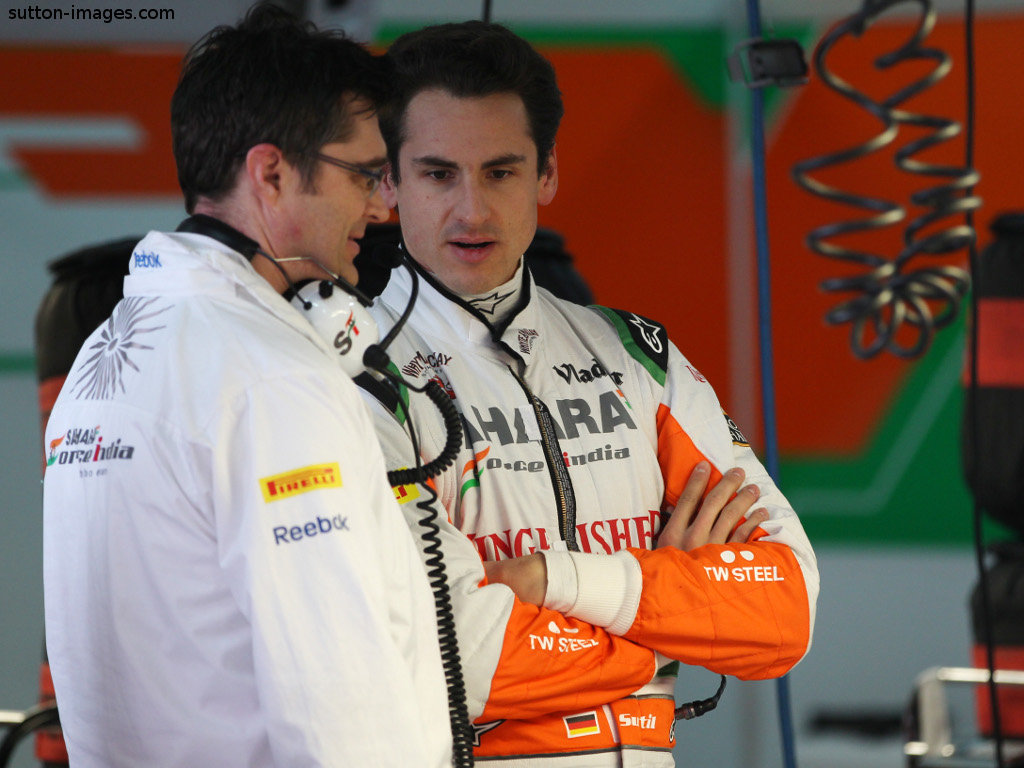 Adrian Sutil makes a return to Force India while Paul di Resta feels he is as well prepared as he could be for the season.

Q. Paul, you completed most of the team’s mileage during the winter. How well prepared do you feel for the new season?
PdR: “It’s been a very positive winter – probably the best winter I can remember while I have been with the team – and I’ve done as much preparation as I can both on and off the track. It’s my third year as a race driver and I’ve got the same team around me so I think that consistency will be very important this year.”

Q. At the launch you did not want to set any goals. Has winter testing given you a better feel for the team’s competitiveness?
PdR: “I think it’s only when we get to Melbourne that we will understand where we are compared to the other teams. You can look at the laptimes in testing, but everybody is focussed on their own programme so you can’t make any assumptions. What we can say is that we’re determined to push on from where we finished last season and the target for Melbourne has to be reaching Q3 and racing for points.”

Q. What has been the main focus over the winter?
PdR: “I think understanding the tyres is where we’ve put a lot of our energy because Pirelli have kept us busy with their new 2013 compounds, which appear to be more aggressive than last year. We have stability in the technical office, which helps, and we’ve tried to build more consistency into the car. We’re as well prepared as we can be, but the first two races in Australia and Malaysia are two of the toughest of the year. The grid seems very closely matched so it’s going to be interesting to see how things shake out in Melbourne.”

Q. Adrian, you’re back with Sahara Force India. Has it been easy to settle back into the team?
AS: “It’s all happened very quickly, but I’ve received a warm welcome and it’s good to see lots of happy and familiar faces once again. It’s clear the team has grown, but I am working with my old race engineer [Brad Joyce] and this team still feels like ‘home’. It’s a new beginning; my second chance in Formula One and I intend to make the most of this opportunity.”

Q. You’ve spent a year away from the sport. How easy is it to get back in the swing of Formula One?
AS: “2012 was an interesting year because I experienced life away from Formula One and in many ways it has given me a new perspective. I think it helped me grow as a person and I feel mentally stronger as a result. I feel fresh and energized, and ready for the season. When I was back in the car for the first time in Barcelona it felt natural – almost as if I had never been away. I was back on the pace and able to push hard straight away.”

Q. What targets do you have in mind for this weekend?
AS: “I’ve only spent three days in the car during testing, but already I’m feeling very comfortable. It’s very driveable and the balance is good. There is still a lot I need to understand, especially in terms of the tyres, but we’re in a good place already. It’s difficult to set a goal for this weekend, but my target for the season is to improve on my 2011 performance and aim for some podiums. So we need to start the year well, aim high and take our chances.”

Vijay Mallya – team principal: “I’m really looking forward to the start of the season. We’ve picked up points in Melbourne for the past couple of seasons so that’s a clear objective for this coming weekend. Last year we had some of our best performances on street circuits, so I’m optimistic we can perform well on the streets of Albert Park.

“I am very happy about our driver line-up and I am particularly delighted to welcome Adrian back to the team. Over the winter we thought long and hard about the decision, but I’m sure we have made the right choice. Adrian is very quick and has a great history with the team – he has been with us from the very start and is truly part of the family. Everyone was impressed by his performance during winter testing in Barcelona: he was able to deliver great pace right away.

“Paul has matured into a very good driver and in his third season with us we are confident he will deliver the results his talent warrants. He has gelled with the team perfectly and following a strong winter he is well prepared for a great season. Adrian and Paul make up the driver pairing that brought us to our best-ever Championship result in 2011 and there is no reason why we can’t have a similar result this year.

“The VJM06 has shown excellent reliability in winter testing. The rules haven’t changed much from 2012 and everyone in the team is confident we can pick up where we left off at the end of last season.

“The first race of the season on a track like Melbourne is always a lottery; if any of the front runners stumble, we will be ready to pounce.”