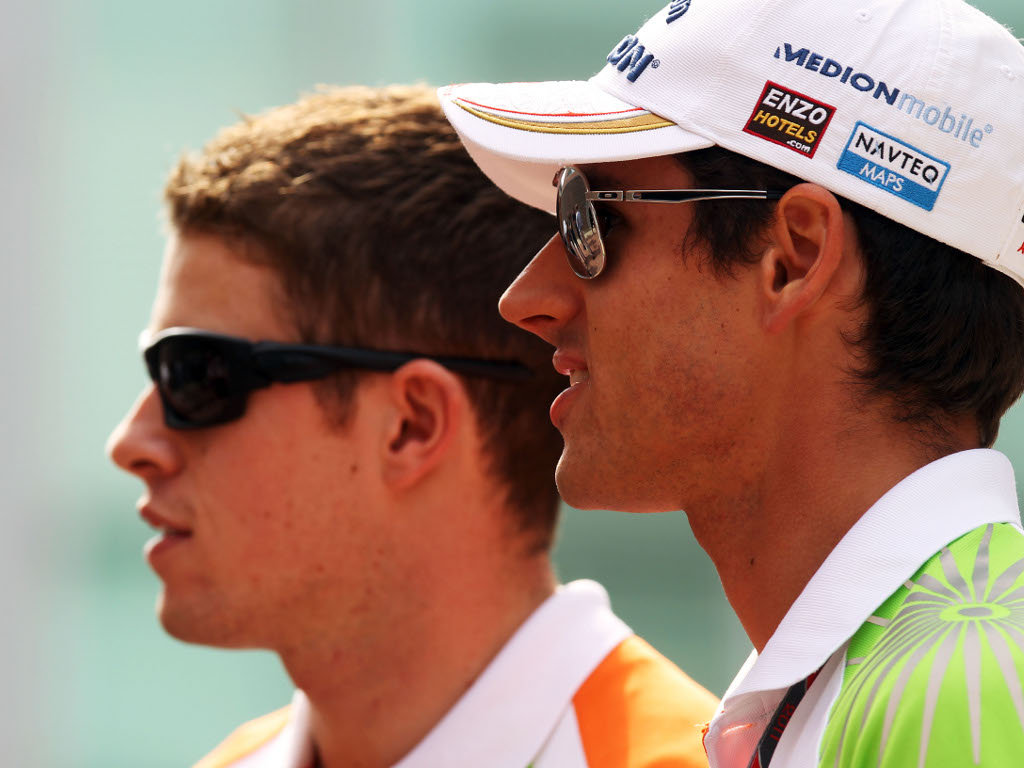 After enduring mixed fortunes in China, Paul di Resta and Adrian Sutil head to Bahrain knowing that the track will suit the VJM06…

After enduring mixed fortunes in China, Paul di Resta and Adrian Sutil head to Bahrain knowing that the track will suit the VJM06.

For all the latest F1 odds on the Bahrain GP, round three of the 2013 F1 Championship, visit Sky Bet.

Q. You were back in the points in China with a great drive – tell us how it felt in the car…
PdR: “Overall it was a good result when you consider how the first half of the race went. I was stuck in traffic, my tyres were graining and I couldn’t move forward. Fortunately we got ourselves into some clean air after my second pit stop and I think we showed that the potential of the car is very strong. We thought we would have to go on the softs at the end and overtake some cars, but we had such good speed that we managed to jump them with our strategy. In the end we left China feeling pretty satisfied, but knowing that there is more potential to come.”

Q. What are your thoughts on Bahrain?
PdR: “I’m looking forward to it. We’re back in the hot weather and we were strong in the heat of Malaysia so there are no real worries. Last year the car worked well in Bahrain, which gives us confidence heading into the weekend. We’ve got a few things to understand and I think we can go forward a bit more. We’re back to the medium and hard, the same as we had in Malaysia, where we were strong.”

Q. What do you need from the car there?
PdR: “A bit more speed, as we always do! We need a clearer weekend; we don’t need things to go wrong, as they did in FP3 in China. It lost us a session, lost us a few hundredths, and that would have made the difference to put us out of position in qualifying to have an easier first lap. So that will be the plan – to be more consistent.”

Q. Adrian, sum up your feelings after China…
AS: “The race was very short. I had a little incident with Paul early on, but we spoke about it, and there’s no problem. For the next few laps I was catching up the cars in front and then Gutierrez just missed his braking point and crashed into my rear. It’s frustrating, but what can you do? He will learn so there are no hard feelings. Hopefully he will not do it again.”

Q. Looking at where Paul finished would it have been easy to get some good points?
AS: “It’s never easy, but I think we can learn quite a lot out of the race. The pace was not so good at the beginning, but much better at the end. We have to understand why. Paul got some good points for the team, but we lost some pace this weekend in general, and there were quite a few quick cars who didn’t finish the race. So we have to get a move on in Bahrain! It should be better for us there.”

Q. Is Sakhir a track you enjoy?
AS: “I like it, yes. With a good car I like almost every circuit. The track is not one of the most difficult ones, but it has a lot of big braking points, so you need a strong car on the brakes. The heat is very different to China, with very high temperatures, and also there’s a different combination of tyres.”

Vijay Mallya – team principal: “Last weekend’s race in China left us with mixed feelings: the pace of the VJM06 was evident throughout the sessions and we would have been on track to place both Paul and Adrian in the points had it not been for the unfortunate accident with Gutierrez in the opening stages.

“Paul’s pace, especially when he had clear air, was indicative of the quality of the work done by the team. We were also very satisfied by the good job done in the pits with a clean and fast final stop helping Paul emerge ahead of Grosjean and Hulkenberg after a race-long battle.

“We now head to Bahrain, where last year we had an excellent result with Paul finishing sixth. This track, with its high temperature and smooth surface, has generally suited our car and we hope this will be the case this weekend. With a bit more luck, we will be able to fully exploit the potential of our car and get some more points on the board before the European leg of the season.”