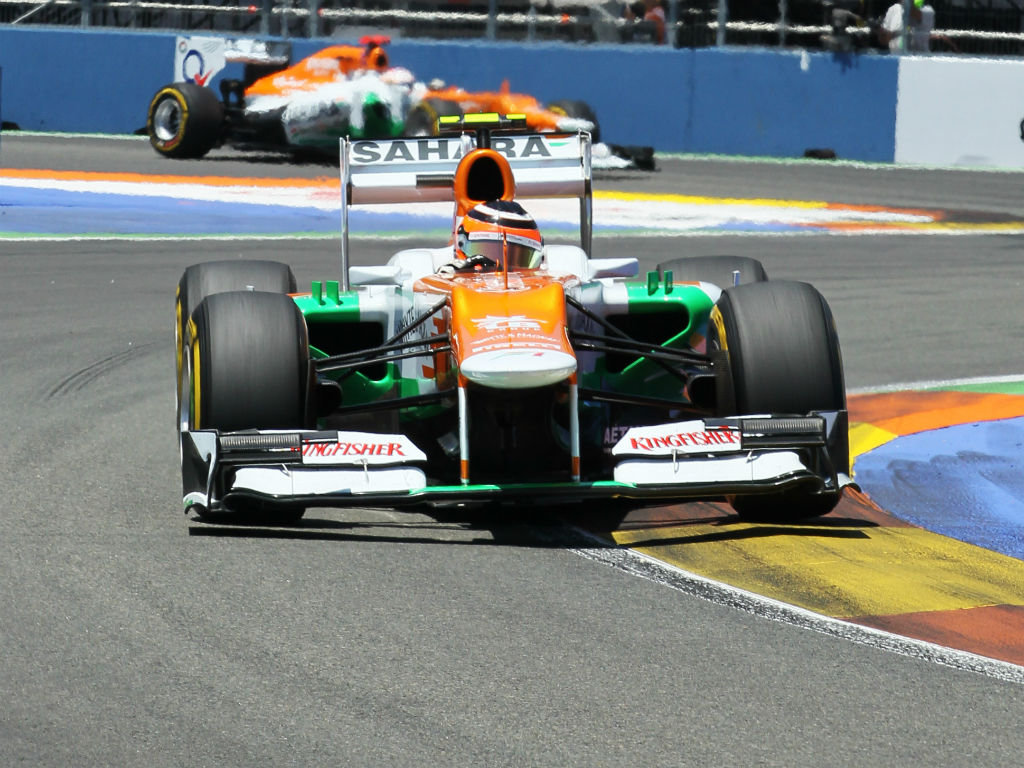 Force India’s performances have gone up a gear in recent races and they will be out to continue that at their home race.

Q. Nico, after two strong results in Japan and Korea, you must be feeling pretty confident coming into the team’s home race…
NH: “The last two races were a lot of fun and probably two of my best races of the year. Korea was pretty much a perfect weekend. I said at the start of the weekend that we needed things to be perfect and that’s what we had: no mistakes, a smooth qualifying and a clean race.”

Q. Since the summer break you’ve scored 26 points – it seems you’ve found the sweet spot with the VJM05…
NH: “I feel comfortable and confident in the car and the team is doing a good job. We’ve just got a good rhythm and momentum, and that’s so important in Formula One. I’ve still had some tough weekends, like Monza and Singapore, but on the whole things have been going well. We just need to make sure we can repeat what we did in Korea during the final four races. We really need to stretch ourselves to get everything we can from the remaining races.”

Q. This is your first Indian Grand Prix and you’re driving an Indian car – how excited are you ahead of the weekend?
NH: “I was at the first Indian race last year, but obviously I didn’t get a chance to drive. I’ve been around the track in a road car and tried it on the simulator, but I still have a bit to learn on Friday. As a race it’s as big as they come for this team. We will be in Delhi at the start of the week to meet the local media and fans and they always show lots of enthusiasm for us. I hope that we will see their support at the track with lots of fans cheering us on.”

Q. Paul, tell us your thoughts heading into such an important weekend for the team…
PDR: “It’s obviously our home Grand Prix and a special weekend. There’s pressure on us to perform and clearly we need to go there ready to keep the momentum going. It’s a busy week for everyone involved with the team and there’s a lot going on in terms of media work and extra events, but it won’t distract from our focus to come away with the best result we can.”

Q. What targets do you have in mind?
PdR: “We’ve got to go there and qualify in the top ten. That will get us in contention and allow us to concentrate on the race. All year we’ve shown that we have a car capable of reaching Q3, but the grid is very close and we don’t have any margin so we need everything to come together perfectly. Also, based on our performance last year, we looked quite competitive at this track so you’ve got to hope that will carry over for this year.”

Q. What are your thoughts on the Buddh International Circuit?
PdR: “It’s one of those new-style Herman Tilke circuits so there’s a good mixture of corners, plenty of run-off and a few areas where overtaking is possible. We found last year that the grip built up quite quickly and the track was exciting to drive with some satisfying corners. I remember that tyre wear was quite high last year and I had to stop three times during the race, so understanding the tyres on Friday will be the priority.”

Q. The team continued its run of points finishes in Korea. What is your assessment of the season so far?
VM: “It certainly feels like we have upped our game since the summer break and it has been satisfying to see us up there fighting for good points. The only frustration is that we have not always managed to get two cars in the points and that has hurt us in the championship. But in terms of outright performance, I think we can be pleased with our level of consistency. We’ve had at least one car in the top ten of qualifying in over 80% of the races and scored points in 75% of the races. While we may not have finished on the podium this year, it is our consistency that has been key to our success and kept us in the fight.”

Q. The second Indian Grand Prix is upon us – what can we expect second time around?
VM: “Last year’s race was already a tremendous success and I’m sure we can expect an equally spectacular event this year. Buddh International Circuit always looks after us very well and I know that they have been working hard behind the scenes to fine-tune the circuit and facilities even more. But above all else, the most important thing is the layout of the track because last year all the drivers loved it. It’s certainly one of the best tracks in the world.”

Q. How is the team approaching its home race?
VM: “I remember how proud I felt last year to see our cars racing in India in the colours of the Indian flag. It was a moment I had dreamed about and a great sporting achievement for our country. To score points was the icing on the cake. This year I would like to go one better and see both our cars in the points – at the very least – so that we can give our fans something to smile about. The gap to Sauber is now 27 points. It’s a big lead, but not impossible to catch them before the end of the year. There’s still a lot of racing to go and we will keep the pressure up for the final four races.”