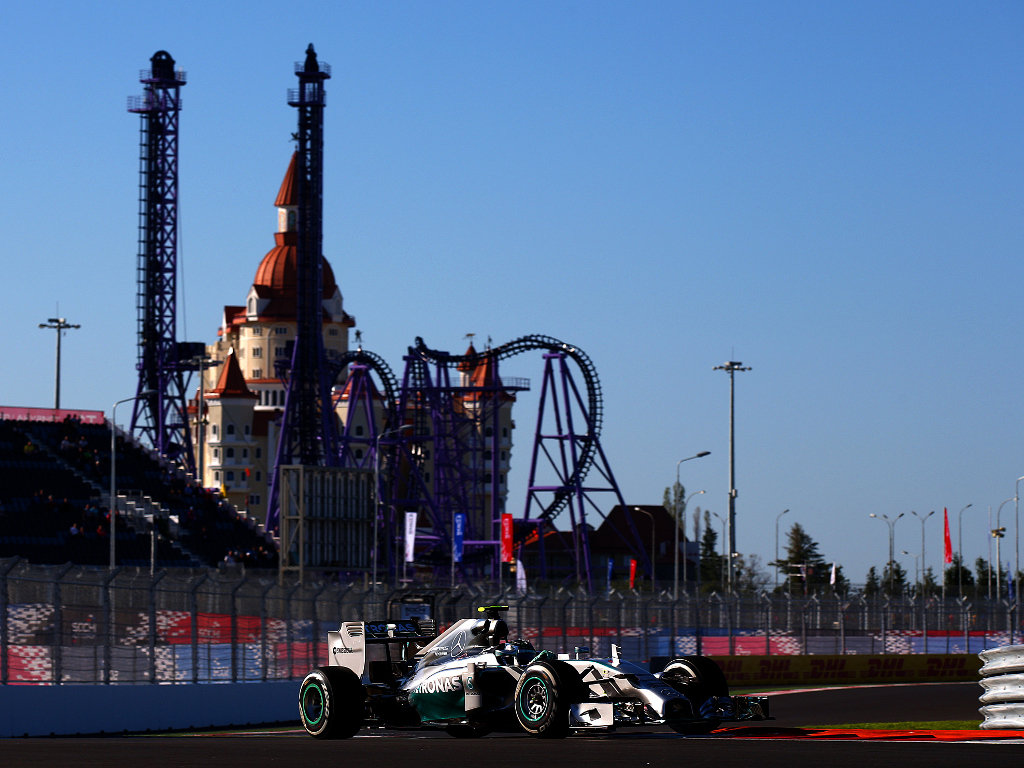 A sombre mood greeted the F1 community at Sochi in Friday, but the show went on with Mercedes completing a 1-2 in Free Practice One.

It wasn’t exactly the start that Russian officials were hoping for ahead of Sunday’s inaugural Russian Grand Prix as everyone is still coming to grips with Jules Bianchi’s horrific accident at Suzuka last weekend.

FP1 started with Marussia confirming that they would only run Max Chilton out of respect to Bianchi, who remains in a critical but stable condition in the Mie hospital in Japan.

On track most drivers got an early feel of the new Sochi circuit and it was no surprise that Mercedes were once again leading at the front with Nico Rosberg taking the early honours with a 1:42.311.

The German was just 0.065s faster than his team-mate Lewis Hamilton, but there was good news for the chasing pack as Jenson Button, Fernando Alonso, Kevin Magnussen, Daniil Kvyat and Kimi Raikkonen were all within a second of Rosberg.

The McLarens in particular looked very fast early on with Button setting the benchmark before the Mercs took over. Hamilton, though, spent quite a bit of time in the garage after reporting “vibrations” in his brakes. Nothing too serious, the team reported.

Another driver who had a shortened session was Valtteri Bottas with the Williams driver completing only nine laps after a “tyre blanket failure”.

“Unfortunately we have had a tyre blanket failure which has damaged Valtteri’s next tyre set – so that it it for his running in,” the team tweeted.

Bottas was 10th quickest with a 1:43.542 when the chequered flag came out while his team-mate Felipe Massa 11th. They were still better off than both Red Bull cars as Daniel Ricciardo was 12th with a 1:43.821 and Sebastian Vettel 14th.

Further down Caterham won the battle of the minnows with Roberto Merhi, who was standing in for Kamui Kobayashi, in 19th and he was followed by team-mate Marcus Ericsson and the lone Marussia of Max Chilton.