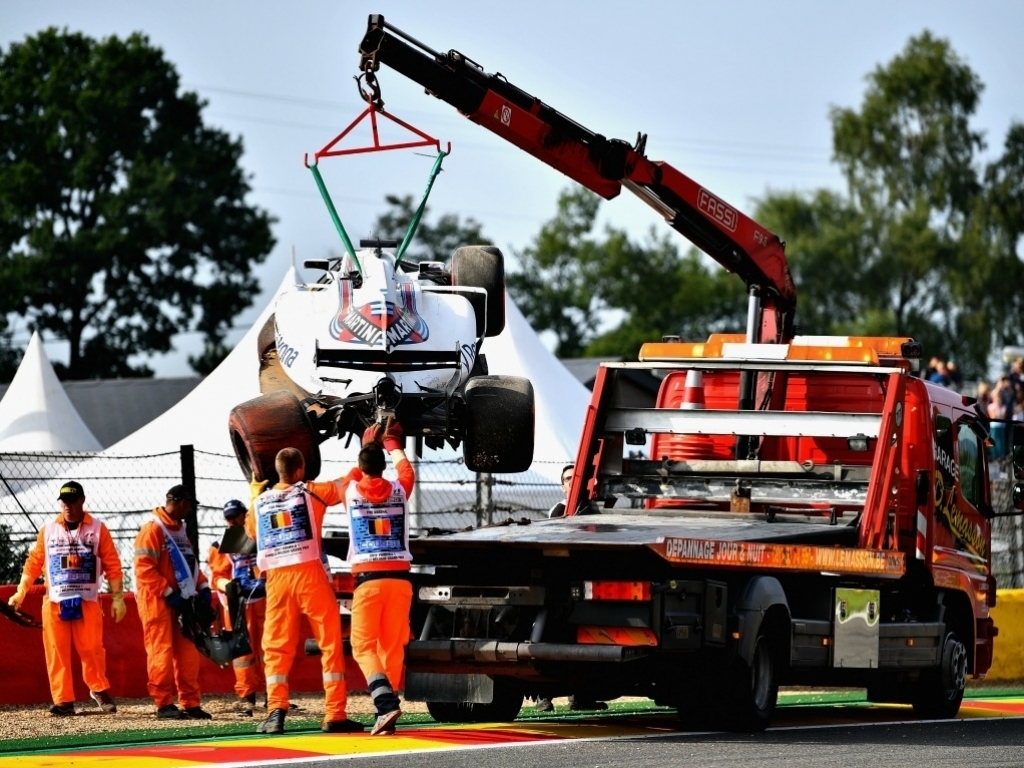 Kimi Raikkonen placed a tentative early marker in FP1 at the Belgian Grand Prix, as Felipe Massa suffered a hefty crash on his Formula 1 return.

Raikkonen set a 1:45.502 on ultrasoft tyres in the final moments of an incident-packed session, but was only five hundreths of a second quicker than Hamilton in P2, who set his best time on the slower soft tyres.

World Championship leader Sebastian Vettel got to within a tenth in P3 after a pretty low-key restart after the summer break, with Red Bull duo Max Verstappen and Daniel Ricciardo finishing P4 and P5 respectively.

Valtteri Bottas was at one stage the quickest driver on track, but quickly undid his best by clipping the barrier when moving out of the way of traffic.

The biggest flashpoint, though, came within the first few minutes after Massa lost all control at Malmedy, but later insisted it had nothing to do with the illness that prevented him from taking part in Hungary.

But the session started with a the familiar call of “no power, no power” from Fernando Alonso on a cool, sunny morning at Spa.

The Spaniard and his team-mate Stoffel Vandoorne are running upgraded Honda engines this weekend, but there were a few teething issues for the McLaren garage to work through.

Hamilton, Vandoorne and Ericsson all ran the controversial Halo cockpit safety device during their installation laps before being promptly taken off again back in their respective garages.

Only Esteban Ocon was able to get a timed lap on the board before the red flags waved after Felipe Massa suffered quite a hefty collision with the tyre wall at Melmedy.

The Brazilian, who was cleared on Thursday to race again after he missed the Hungarian Grand Prix through illness, took too much kerb on entry and his Williams car snapped out as a result.

The car recovery and clean-up operation was quite a lengthy process, forcing a flurry of activity out on track when the session was given the green light again with an hour remaining.

However, there were also issues for Nico Hulkenberg, who had hot air being released into his cockpit, while an ERS issue meant Pascal Wehrlein was restricted to just a handful of laps.

Daniil Kvyat’s programme was also affected because of a problem with the rear of his Toro Rosso car.

Mercedes were the team showing much of the early pace but, just seconds after Bottas went quickest with 24 minutes remaining, he compromised his session by clipping the wall at Fagnes trying to get out of the way of another car on a hot lap.

As Bottas’ mechanics addressed some front-wing damage, team-mate Hamilton upped the ante on fresh tyres by going seven tenths quicker than anyone else with a 1:45.555 on soft tyres.

With Raikkonen losing out on precious time with plenty of work going on with his Ferrari, Vettel was the driver leading the Ferrari charge and climbed to within a tenth of his title rival with fresh ultras strapped on.

Raikkonen and Bottas both re-emerged with five minutes of the session remaining and the former was able to pip Hamilton to P1 by going five hundreths of a second quicker on ultrasofts.