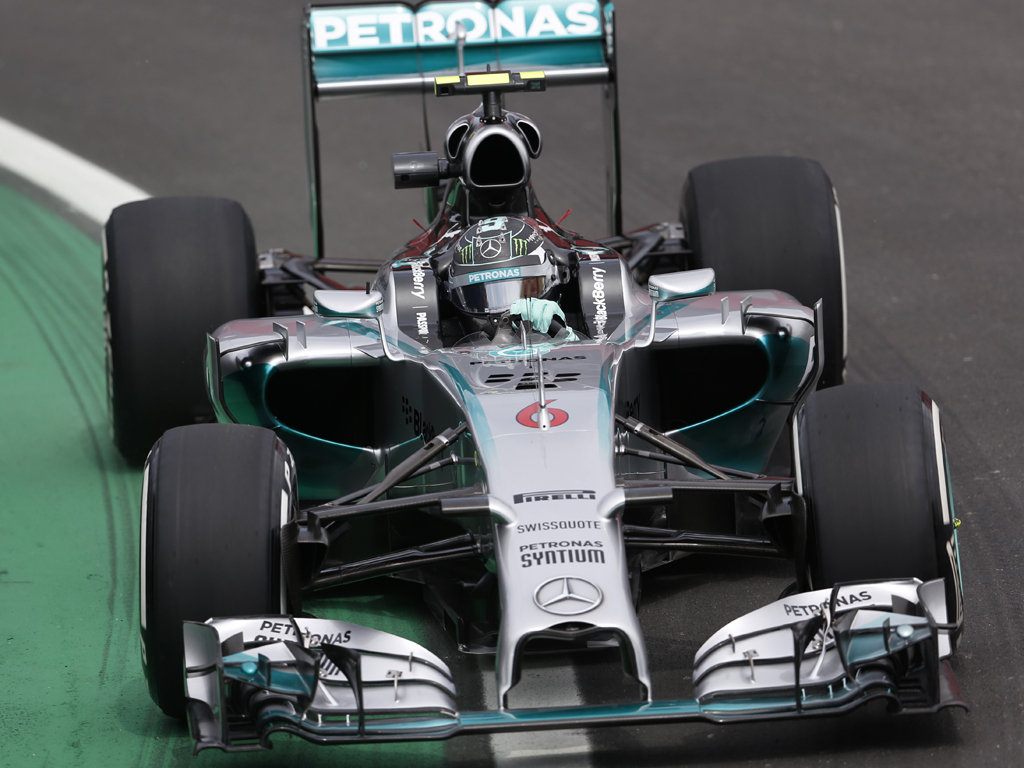 Nico Rosberg held onto his advantage over team-mate Lewis Hamilton as he edged the Championship leader in Friday’s second practice for the Brazilian GP.

FP2 got underway in sweltering hot conditions with the track temperature sitting at 58’C.

With Hamilton revealing that the temperatures made the “track really difficult to drive”, Mercedes didn’t have it all their own way at the start of the session.

Daniel Ricciardo was involved in the mix early on, leading the way before he was overhauled by Hamilton with a 1:13.072.

After that it wasn’t long before it became as a Mercedes 1-2 as Rosberg upped his pace to close the gap to 0.203s. Ricciardo dropped to third, half a second down.

As the track temperature fell by a few degrees, the drivers swapped from the medium to the soft Pirelli tyres.

Ricciardo was the first of the leaders to make the change and again hit the front, a 1:12.956. However, that was blitzed when the Championship contenders did their qualifying style runs.

Rosberg went quickest with a 1:12.123 while Hamilton’s time put him into second place. But, having run wide at the right-hander down at Turn 11, the Brit finished 0.599s down. He upped his pace on his second lap to close the gap to 0.213s.

Switching to heavy fuelled long runs for the final 30 minutes, the duo held their positions through to the chequered flag while Kimi Raikkonen found some added pace to take third, 0.573s down.

Ricciardo dropped to fourth ahead of the Williams pairing of Valtteri Bottas and Felipe Massa while Fernando Alonso was sixth. The quartet all crossed the line within a second of Rosberg’s P1 time.

Alonso’s afternoon came to a premature end when his Ferrari engine failed with flames licking the back of his F14T. The Spaniard climbed out of his car and grabbed a fire extinguisher but the damage could result in him needing a sixth engine – and the penalty that comes with that.

Alonso’s issue brought out the red flags, one of three for the afternoon as they were also waved when Jean-Eric Vergne was told to stop out on track and again when Esteban Gutierrez broke down out on track.

While Gutierrez’s was a late red, Vergne’s was early in the session and he finished the day with just five laps to his name as he didn’t run at all in the morning as Max Verstappen was in his car.

The only driver who completed fewer laps was Sergio Perez. He did not even manage one as Daniel Juncadella’s accident in FP1 resulted in his car’s engine overheating. Force India revealed prior to the afternoon’s session that work to change seals meant Perez would not be in action.