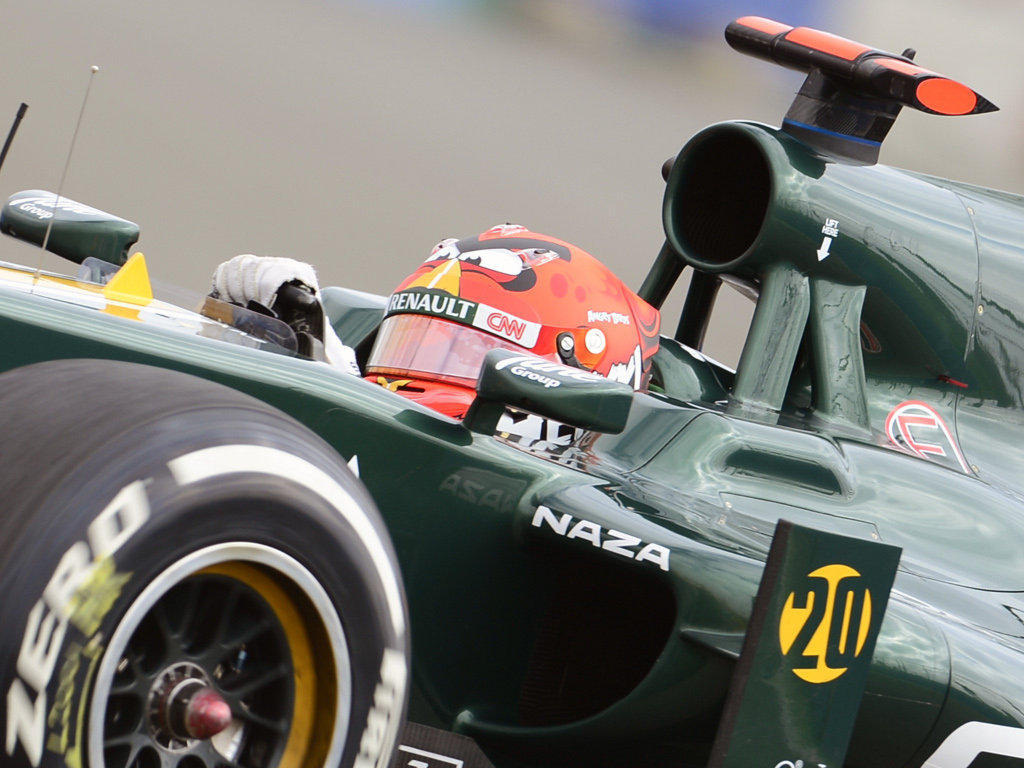 Vitaly Petrov had a great start to his European GP weekend, edging ahead of the Toro Rossos in Friday’s practice…

Vitaly Petrov had a great start to his European GP weekend, edging ahead of the Toro Rossos in Friday’s practice…

Caterham:
Vitaly Petrov: “That was a positive Friday for us. FP1 started out with the track as green as we knew it would be, but that affects everyone the same so we got on with the programme and concentrated on finding a balance that would work once the grip levels improved. We were also looking at some new KERS maps that worked well, but perhaps would be better suited to a circuit that is less stop/start than Valencia. We’ll look again at that overnight and I’m sure we’ll find the right solution for this track in time for FP3. In FP2 we got through most of the plan, running on low and heavy fuel and on both tyre compounds and until we had a mechanical issue towards the end of the session the car felt good. We have brought a couple of updates here and it definitely felt better but we will see the full upgrade package at Silverstone. Still, it’s good to see us continuing to develop the car and to keep getting closer to the target this year, so I think qualifying and the race could both be pretty interesting for us.”

Heikki Kovalainen: “A pretty good Friday for me, with both sessions going to plan. In FP2 we ran a new version of the front wing and the initial feel it gave was good – it’s too early to tell how much it’s worth but it’s a good sign that what was predicted in the factory seems to have worked on track. There’s more to come for the next race but this looks like it could be a good step.”

Toro Rosso:
Daniel Ricciardo: “The track was quite dirty in the morning session, with some litter on it, blown across by the strong wind, but it cleared up as the afternoon went on. The wind actually affected the car in a few braking areas when it was blowing as a tailwind. As for the car, when I was running in more of a qualifying trim, we seemed to be lacking a bit of performance. On my long run at the end of the second session with more fuel on board, I certainly felt the car was better, so that was more positive. Therefore, we need to improve the car on low fuel and I think we have an idea how to do that, so we will study all the data now and put together a plan for tomorrow. I am confident that, tomorrow, we can move up a few places from where we are now.”

Jean-Eric Vergne: “I have raced here before, a few years back in GP3. Of course, it’s a very different circuit from the cockpit of a Formula 1 car, but at least I had some idea what to expect. We did a lot of work on set-up, trying things linked to the exhaust system configuration that was first used by Daniel in Montreal. In general, we need some more speed and a couple of tenths off the lap times, because we are not fast enough. I think if we can make just small improvements in a few areas, then we can find more pace tomorrow.”

Marussia:
Timo Glock: “I have to be quite pleased with the work I have done today, as it has not been an easy day of Free Practice for me. I seem to have picked up a stomach bug over the last couple of days and for a time I have to say I was feeling quite unwell. Back in the car today I have felt a little better and I am hopeful that I am on the mend. With the programme I worked through, the car was performing well for me, so a good start in that respect. My plan now is to work through the data so I have plenty to sleep on while I concentrate on recovering for a new day tomorrow.”

Charles Pic: “A very interesting day for me as my programme was slightly different to normal. The engineers changed things around quite a bit to help Timo’s recovery, which meant that I was doing more of the race preparation work. This was good for me and I am happy with what was a slightly more diverse plan. In the end, we seem to have a good set-up direction and with the amount of running we did, we have plenty of data to explore this evening. I think once we have looked at this and we are back in sync tomorrow, we will find that we have recovered some of what we lost in Canada and we can start to work on the gap to the cars in front of us again. For me, a good start, and I am happy that there is more we can achieve this weekend.”

HRT:
Narain Karthikeyan: “In the morning the track was very dirty because it hadn’t been used yet, so we just did some running and some work on the set-up and weight distribution of the car. In the afternoon we tried a few other things as the track was in better condition but we struggled to get the option tyres hot for the quick lap, so we have to work on that to try and get the most out of them for tomorrow’s qualifying. Other than that it was a good day and tomorrow we must look to build on this and find that long-desired good performance in qualifying.”

Pedro de la Rosa: “n the first session our weakest point was braking, as we were blocking the front and rear tyres. We improved notably in the afternoon after making some changes and you could feel it straight away. The session was going well but I made a mistake and went off track which, unfortunately, damaged the entire front suspension. My session ended there and we were unable to test neither the soft tyres nor many things which we had in mind but I’m keeping the positive aspect which is that we improved the car. I’m well and my mechanics are already repairing the car. They’re extraordinary professionals and tomorrow everything will be ready again to give it our best go once more in front of our home fans.”