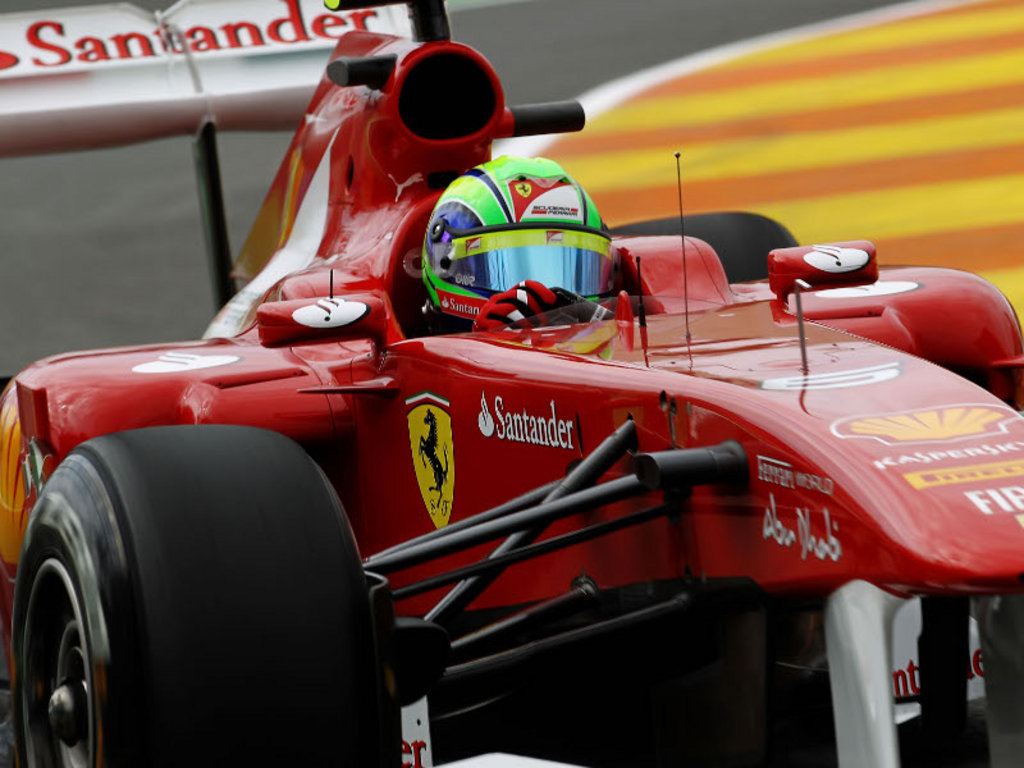 Felipe Massa put in a late charge to lead the way at a wet Silverstone, beating Nico Rosberg, Kamui Kobayashi and the McLarens…

Felipe Massa put in a late charge to lead the way at a wet Silverstone, beating Nico Rosberg, Kamui Kobayashi and the McLarens…

Ferrari:
Felipe Massa: “The weather meant it was a difficult day, with rain affecting both the first and second sessions. However, it seems to me that the car handles pretty well in the wet, which is positive in terms of the rest of the weekend, given there’s a chance of more rain. That is also the reason why I only used one set of intermediate tyres: I had a bit of graining on the fronts, especially at the start of the second session, but towards the end, the situation improved and the performance of the tyre got better all the time. Therefore, it is difficult to say where we are compared to the others, as the track conditions were changing continuously and it’s not even easy to give an in-depth evaluation of the new components we brought here.”

Fernando Alonso: “It’s always nice to come to Silverstone, an historic track for Formula 1 and for Ferrari, which took its first championship race win here sixty years ago. I like the new paddock: the only strange thing is the final part of the pit lane, which is lower than the track, which means the spectators cannot see the pit stops from the grandstands. The rain definitely did not help on a day that was meant to allow us mainly to test the new aerodynamic components we have here. We tried to do what we could, using just one set of intermediate tyres, both because we wanted to save the others for tomorrow and Sunday and because that way, we have at least one stable parameter with which to evaluate the aerodynamic findings. Only at the end of the first session did I risk trying a set of slicks to see if the conditions were acceptable, but the track was still too wet. From what a driver can learn at the wheel, it’s difficult to say if the new aerodynamic parts have helped us make progress, but at least they seem to work well. In the wet, the car was not bad, as we had seen in fact in Canada: it’s positive, because it could be like this again, especially tomorrow. Support Webber for the championship? No, I’m supporting Ferrari!”

Mercedes GP:
Nico Rosberg: “It was difficult out there, however our car worked well in these conditions, and maybe we have a better pace in the wet. The Pirelli intermediate tyres were certainly performing well today. We will have to wait for dry conditions to get a true picture of our updates as we weren’t able to achieve all of the work that we would have liked, so tomorrow will be important for us.”

Michael Schumacher: “It was difficult to judge the real performance of the car today as the conditions were never consistent enough to achieve a proper analysis of where we are. So I won’t make any conclusions from today’s practice sessions until we have the chance for some dry running tomorrow. However I’m confident that it was a good first day of our Silverstone weekend and I’m looking forward to one of our home races. We are continuing to develop step-by-step and make improvements to the car.”

Sauber:
Kamui Kobayashi: “First of all I want to say thank you to the mechanics who fixed my car in time for the second free practice. When I crashed I had lost control on the wet astro turf. Despite this crash, I think it is obviously quite difficult to make any judgments on the car, the balance and the set up in today’s conditions. However, our performance in the wet won’t count for anything as the track will be dry tomorrow. Therefore we are looking forward to more surprises, hopefully nicer ones than we had today.”

Sergio Perez: “Welcome to England! For me it was a good day, although we had no dry running at all. We did some work today with new parts, and will only see tomorrow how the car handles in dry conditions. Almost everything we experience will be new and different on Saturday. I’m very positive and looking forward to a good qualifying session tomorrow.”

McLaren:
Lewis Hamilton: “It’s a shame today was so wet, because I really wanted to put on a good show for all the fans – they had to brave some pretty cold and damp conditions all day, so I’m pleased that it looks like the weather will improve for the rest of the weekend. Fingers crossed.

“Despite the lack of running, today was actually quite encouraging; we tested a couple of things and I managed to pick up quite a decent feeling for the car.

“It’s going to be interesting tomorrow if it’s dry, because I think our car is looking quite good. The new rear wing also felt quite positive, but we’ve still got to decide whether we carry it over into tomorrow and the race itself.”

“The reason I went to the stewards was to discuss the correct usage of DRS in wet conditions: the rules don’t clearly state whether you can use DRS on slicks in wet conditions, which is what we did this morning. The stewards just wanted to understand so that they could tighten the wording of the regulations for the next race. I also suggested a couple of tweaks to make the regulations clearer and safer, so it was quite a useful visit.”

Jenson Button: “Today was a bit of a frustrating day for me; we thought we’d get some good running under our belts this afternoon, but the rain meant that didn’t happen, and we didn’t really get a chance to evaluate everything.

“The balance was okay in P1. Hopefully, it’s not going to rain for the rest of the weekend, so we should be able to get a better read on how the new interpretations of the regulations will affect us from tomorrow. We don’t really know if our new rear wing is an improvement over the older version. It has a different downforce level, but I’m still not sure what we’re going to run for the rest of the weekend.

“The new facilities here at Silverstone are great – the only problem is that, at our end of the pitlane, we can’t see the fans and they can’t see us! Still, it’s a fantastic effort from everybody involved.”