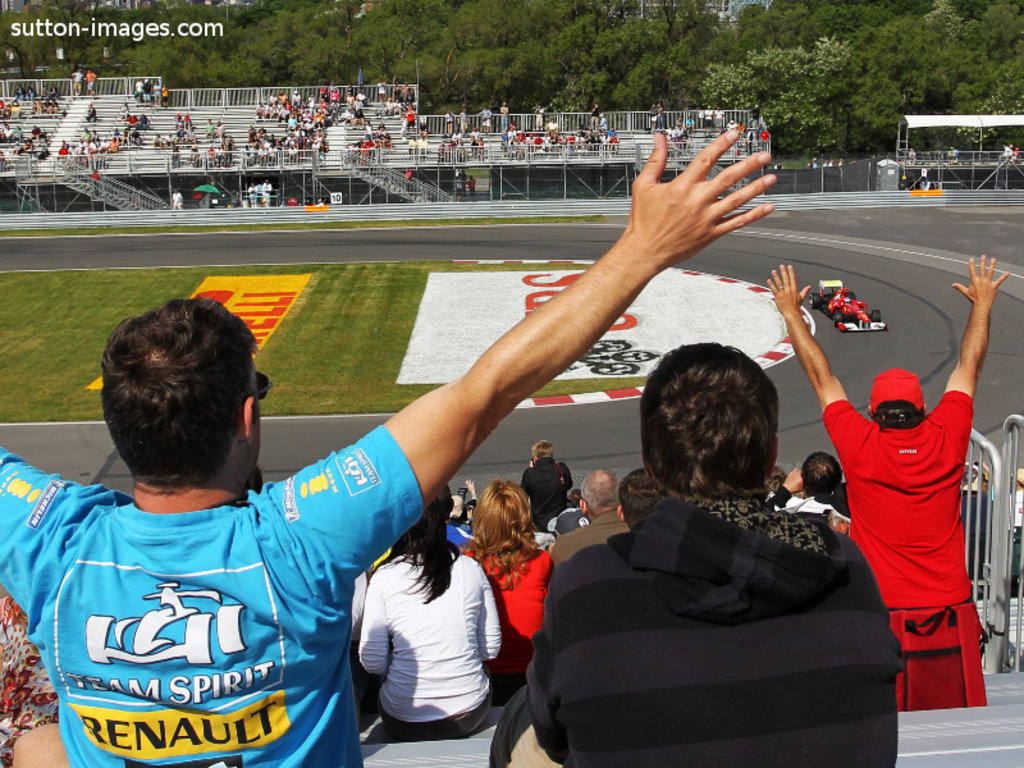 Fernando Alonso set the pace in Friday’s practice in Canada, edging ahead of Sebastian Vettel and Felipe Massa…

Fernando Alonso set the pace in Friday’s practice in Canada, edging ahead of Sebastian Vettel and Felipe Massa…

Ferrari:
Fernando Alonso: “As usual on a Friday, the times don’t mean much because we don’t know what programme the others were running and especially because rain is forecast for Sunday: the data acquired today could turn out to be of not much use. We followed our programme, trying out the different types of tyre and various aerodynamic solutions. It was definitely one of our best Fridays – it does not happen often that we see our cars in the top five places – but it is true we were also quickest on both Thursday and Saturday morning in Monaco and then, in qualifying, we found ourselves nine tenths down on the Red Bull: that’s when they show their true potential and that’s why they are still our main rivals, along with McLaren and Mercedes, who seem to be very strong here. We saw various accidents, probably when drivers were working on long runs. It’s hard to drive in these conditions and then there are three or four places here where the slightest error sees you end up in the wall. In the race, I expect the safety car will play a part. Once again, it looks like the Soft tyres should suit us and so too does the new Medium compound, which is due to make its debut in Valencia and which, even if I only did five laps on them, gave me a good feeling. This track could allow us to exploit the DRS more than at others: between turns ten and twelve and then on the pit straight, I think it will work well in the race. Unfortunately the red flags hindered me on my runs with the Supersofts and in the end, we had to modify our programme, switching to gathering as much data as possible from both cars running different fuel loads.”

Felipe Massa: “It was a good day, maybe the best Friday since the start of the season. The car seems competitive and the balance wasn’t bad for a first day of practice. Obviously, it’s only Friday so it is difficult to have a clear picture of the situation, partly because we don’t know if our competitors are trying different things, but I am reasonably pleased. Unfortunately, because of the red flags, I wasn’t able to use the Supersofts the way I would have liked, so I concentrated on the long run with the appropriate fuel load on board. The fact we can use the moveable rear wing at two points on the track definitely helps for overtaking. The tyres are working well and the degradation is not excessive, so I don’t think we will see that many pit stops during the race. However, we have to take into account there is a very high threat of rain for Sunday, so we could end up having a wet race.”

Red Bull:
Sebastian Vettel: “I had an incident this morning. I lost the rear, but by the time I hit the wall I had low speed, so the crash was quite mild. There wasn’t much damage, so we could fix the car and get back out this afternoon. McLaren and Ferrari look strong here, although I haven’t seen all the times from practice yet. For us, I’m happy with the car’s balance and how it performs, so we will see. It’s a special circuit here, it’s quite rough with the kerbs and chicanes, but I like it. The target is to win, but it’s a long weekend and a lot of things can happen. It’s important to finish and do your best, whatever that is.”

Mark Webber: “We were a bit compromised with the red flags at the end of P2, so we could have had a smoother end to the final session, but it wasn’t too bad. We tried different fuel loads today and now we just need to chip away and get the car a bit quicker. It’s a tricky venue here and we might have some different weather conditions thrown into the mix over the next 24 hours.”

McLaren:
Lewis Hamilton: “It was a very good session and a positive day for me. In P2, I think some debris from one of the incidents must have caused my puncture because I’d only just left the pits when I suddenly felt the rear sliding about. Nevertheless, we got through a lot of test components. I’m still trying to find the exact balance I need, and I’m not quite sure which direction I want to follow with my car, so I’ll sit down with my engineers to analyse the data this evening. Our long-run pace is pretty good; the speed is there. It looks very close once again between Red Bull, Ferrari and ourselves, so we’ll work on qualifying, get the car nicely dialled in and then I’ll keep my fingers crossed. It’s surprising to see so many incidents here, but it’s such a demanding and slippery circuit that I guess some people just got caught out today. We’re all testing the limits of our cars and you can’t blame people for trying. There’s no room for mistakes around a place like this and, unfortunately, some people paid the price today – but they’ll bounce back tomorrow.”

Jenson Button: “It’s very difficult to make effective set-up changes when there are so many red flag stoppages. It’s a very tough circuit here – one hit of a kerb in the wrong way can send you into the wall. But we did some high-fuel runs on the Option tyre; it was key to get some laps on the Supersoft. It’s all useful information and I’m confident we can still improve the car’s balance on low-fuel. We didn’t do any low-fuel running on the Supersoft because of the two red flags, so we just filled the car up and sent it out at the end of the afternoon. It’s pleasing that the car felt pretty good on high-fuel. The Red Bulls are quick, so are the Ferraris, the Mercedes and ourselves – I think it’ll be a little bit closer than it’s been in the past few races.”

Force India:
Paul di Resta: “Today was really about familiarising myself with the circuit and getting up-to-speed. The track was quite low grip in the first session with a lot of dust on the road, but the conditions had improved quite a bit by the afternoon. We made a few changes to the car, looking at the ride height and aero balance, and I think the direction we’ve taken has been pretty positive. There is still some more speed to come, but I’m pleased with the progress we’ve made today.”

Adrian Sutil: “I had quite a big workload to get through this afternoon so it’s a shame to lose so much track time. I was pushing hard on the option tyres and touched the wall on the exit of turn 7. That caused some damage to the suspension and I had to park the car. However, I think we still have a nice balance and we seem to be quite competitive this weekend. There’s a lot of work to do tomorrow morning because I missed a couple of long runs and I haven’t done many laps on the option tyre, but I’m sure we can still have a good weekend.”