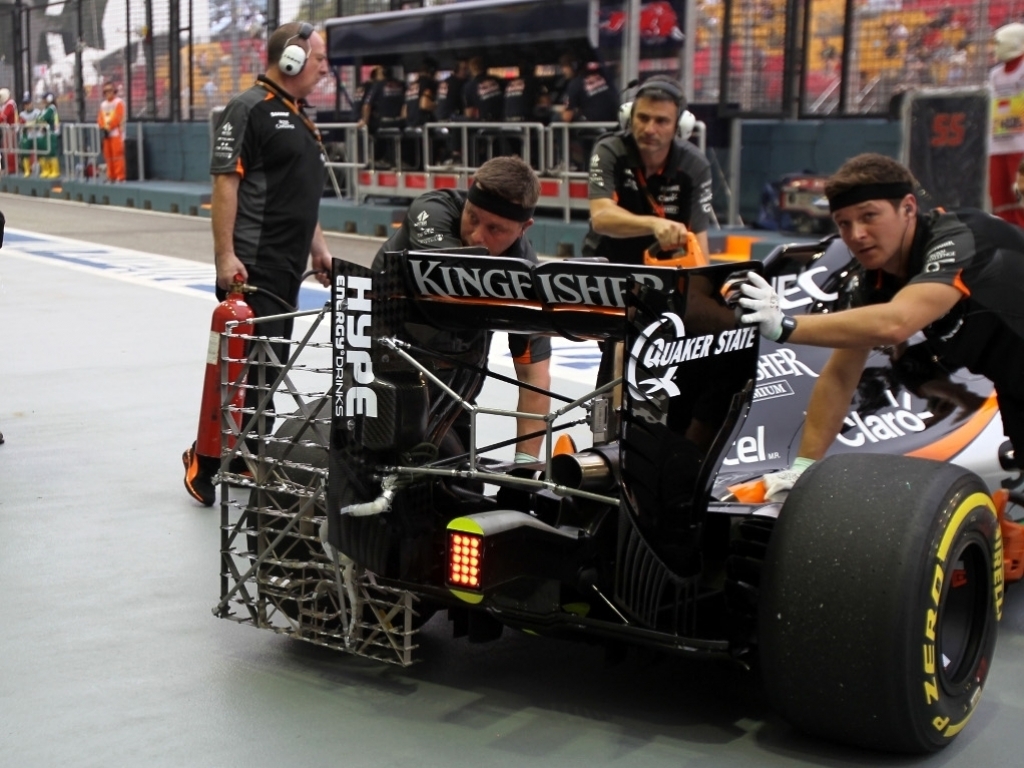 Force India managed to pip their rivals Williams during the two practice sessions today as they continue their heated battle for fourth place on the Constructors' Championship table.

Force India:
Nico Hulkenberg: "I am pretty happy with today and it was a fairly straightforward start to the weekend. We ran all morning on the medium compound, which looks like a good tyre, and we worked with the soft and supersoft this afternoon. The pace looks alright and I felt pretty comfortable in the car, especially in the second session as the track improved. There’s obviously still quite a bit of work to get where we want to be, but overall it’s a positive start and I am looking forward to building on it."

Sergio Perez: "It think we were the only team to run the medium compound today alongside the soft and supersoft, which allowed us to get a lot of data about each of the three different tyres. The mediums are performing quite well, which is a bit of a welcome surprise. It’s still early, but I think the weekend has a lot of potential and we’re in a good position to make the most of it. There are still some areas to improve when it comes to car balance, but we should be able to sort it overnight after looking at the data we collected."

McLaren:
Jenson Button: “I was driving down the pit straight when I got something in my eye. It wasn’t stuck in my eye, but it was a foreign body, which the hospital washed out and removed. It scratched my eye, so I’ve been given some eyedrops – but all is good. I don’t know what it was – maybe a piece of carbon dust, which has happened to me before. The session was okay – the car didn’t feel too bad at all – but I had to stop early because of the problem. The aim for the remainder of the weekend is to be up there behind the top three teams.”

Fernando Alonso: “It was a nice way to celebrate my birthday here with the team – we spend 200 days a year alongside each other, so that was a fantastic feeling. I now need to focus on the weekend and help improve our pace a little. We felt competitive straight away in the first session – more than in the second, where we lost some performance. But we might need to go back on some set-up changes and find a way to improve the car for tomorrow. For this weekend, we need to be realistic: there are three teams that are a little bit quicker than everyone else, then, behind them, there’s a close fight. If we want to beat our direct competitors, we need to get everything right – but that’s likely to prove a little more difficult than it did in Hungary. Still, I’d hope and expect that we can score points on Sunday.”

Toro Rosso:
Carlos Sainz: "It was good to drive here for the first time with an F1 car – it was obviously quite challenging, but I enjoyed it. The conditions out there today were tricky, especially with the wind that picked-up during this afternoon's FP2 and there was also a bit less grip on track. We don't look too bad here, but we still need to keep finding time – I think the others could improve massively for tomorrow and we have to make sure we do the same. It's very competitive out there and the long straights don't make it easy for us, but this doesn't mean we won't stop working on it! I'm feeling positive and I look forward to the rest of the weekend."

Daniil Kvyat: "It was quite a clean Friday, something we had been missing for a while, so we definitely have a good baseline for the rest of the weekend. Of course, we still have a few bits and pieces to digest and to correct for tomorrow and if we do it right we should get better and better. I felt quite good in the car and I enjoy driving here, it's a pleasant track from the good old days."

Williams:
Valtteri Bottas: "Today was quite a standard Friday to be honest. We’ve been doing shorter and longer runs to try out the front wings and get information on the tyres. Everything we needed to do today we managed to complete. Personally, I think we can be better than this and I’m sure we can be more competitive going into tomorrow. Qualifying is going to be very close because the track here is quite short so the time differences are going to be very small."

Felipe Massa: "It was a very difficult Friday to be honest. I struggled to find a good balance with the car and to understand how the tyres are working around here. It also wasn’t a good day in terms of laptimes as we struggled with the consistency of the tyres. There’s definitely work that we need to do ahead of FP3 and qualifying tomorrow."