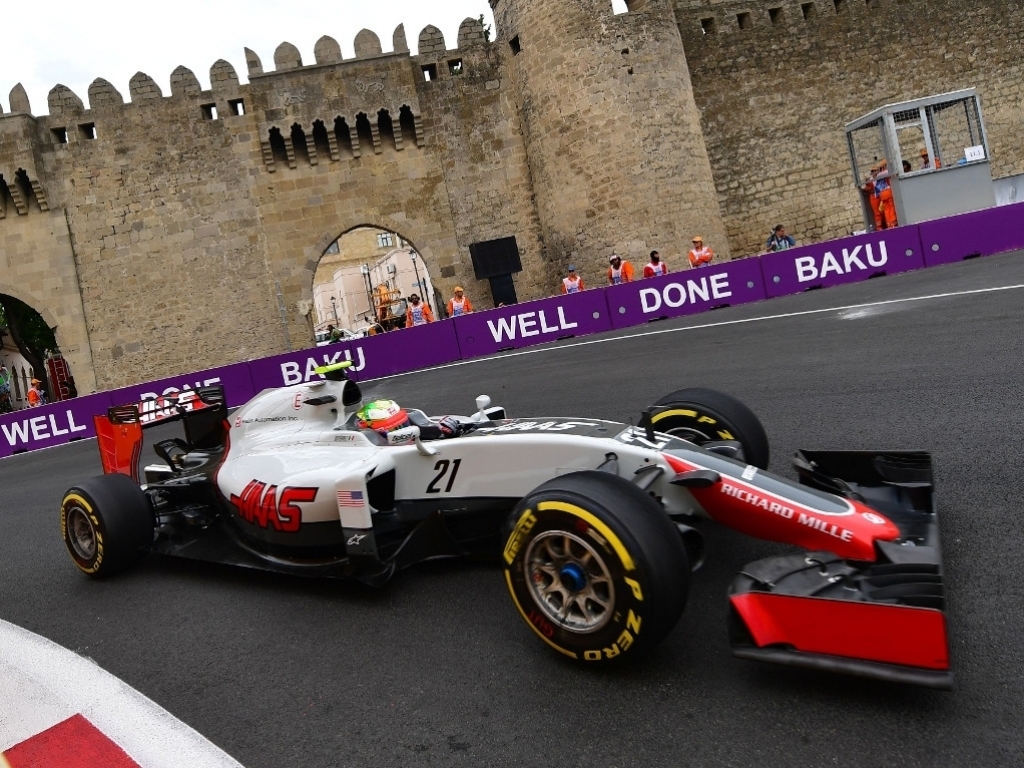 Haas failed to break into the top-ten in Friday’s practice in Baku while Renault, Manor and Sauber made up the very bottom of the timesheets…

Haas:
Romain Grosjean: “Discovering a new track is exciting in some places and pretty tricky in others. It’s not easy to find the right balance but I’m much happier than where we’ve been recently, so that’s pretty positive. I’m sure there’s still a lot to come from everything. It wasn’t easy with the track temperature dropping this evening to find the right set up, but I think we’re in a position where we’re getting there finding the balance. Tomorrow we can improve a little bit. We’re just outside Q3 which wouldn’t be a bad place to start. The car definitely felt better than more recently and the tires were working better. There are still a few issues we need to solve but generally I’m happy.”

Esteban Gutierrez: “It was a productive Friday for us. We had a good program and we managed to complete everything we wanted to do. It was very interesting to get to know the circuit. It’s a fun track to drive. The car seems to be behaving well and the grip is better than I expected, so that’s a positive we can take through the weekend. Obviously that will keep on improving so we need to make sure we follow that with the car setup to maximize its potential. I had a small touch with the wall toward the end of FP2 where the track becomes very tight due to a little bit of understeer, but it was ok and there was no damage to the car. Now I’m looking forward to tomorrow and to qualifying.”

Renault:
Kevin Magnussen: “It’s an awesome circuit and quite a challenge. The car didn’t feel fantastic in the first session but it felt much better in FP2 with the set-up progress we’d made and also the track improving. I’m pretty happy with the balance of the car. We’ve got a little work to do with brake locking, but that should get better with the track improvement. I’m looking forward to getting back out tomorrow once we’ve worked a bit more on the car. I think we’re set for an interesting weekend.”

Jolyon Palmer: “It was pretty slippery in FP1 and I think most drivers had a moment at some point over the two sessions today. We made good progress with understanding the track and making improvements to the car. I certainly appreciated the extra grip we found on the supersoft runs but we’re still looking for a better balance in the high speed corners, something we can hopefully find in the set-up before qualifying.”

Manor:
Rio Haryanto: “Today was a really positive day for us. If I compare FP1 and FP2, we seemed to be more competitive in FP2, so we’re obviously heading in a good direction. We did some long runs to understand the tyre degradation better. The Supersoft tyre was trickier but the Softs felt quite good. I really enjoyed getting to grips with the circuit; it’s a fun track and I think we’re in good shape for tomorrow and for the race.”

Pascal Wehrlein: “I’m very happy with the track; it’s really nice – and interesting – and I’m enjoying driving here. FP1 was good because I did my lap on the Medium tyres, but then we made some changes between the two sessions and things didn’t work out so well. We need to go over the data and explore this a little more, so we can be back on it for FP3 tomorrow.”

Sauber:
Marcus Ericsson: “First of all, it was a great job by the guys to do the engine change between FP1 and FP2 because of the exhaust problem we had. As I did not miss that much time in FP2, I was able to run a good amount of laps. I was struggling a bit more in FP2, but I had a good feeling and continued to learn this new track. Every lap is important, so it felt like I took some good steps from lap to lap. Overall a busy day for all of us, but we learned a lot and go into tomorrow with a positive mindset.”

Felipe Nasr: “Overall, it was important today to get into a good rhythm on this new track. In FP1 we had an issue on the second set of tyres. The rear left tyre got damaged, so for safety reasons I could not continue. Therefore, I lost a bit of track time towards the end of FP1. Nevertheless, I was able to recover quite well in FP2, altough the lap time does not show that. As I ran the practice engine, I should gain a bit more lap time on the straights with the race engine as of tomorrow. The track layout is very much dominated by a good top speed, so I am confident the timesheets will look better tomorrow.”