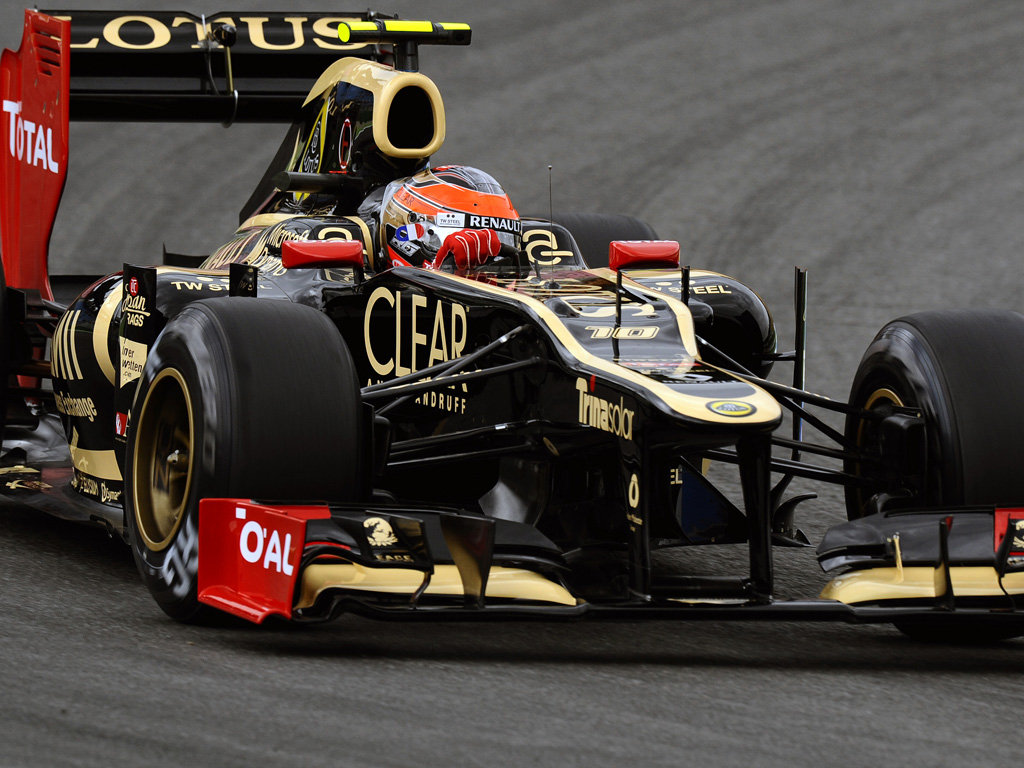 Lotus F1:
Romain Grosjean: “It was a difficult session with the rain coming down. It looks like we’ll have more wet running tomorrow so it was good to get a feel for the wet and intermediate tyres. We had a few things we were hoping to test in dry conditions but unfortunately this was not the case. If we get to Sunday without any dry laps then people won’t have so much of an idea about tyre degradation and the difference between the compounds, which may help me starting further back on the grid with the penalty. Either way, we now have a good base line setup from today and hopefully this will help bring us a decent result at the end of the weekend.”

Kimi Raikkonen: “We didn’t learn a lot today with the weather conditions as they were ; it was like Silverstone when we also didn’t have very good conditions. We tried a few different things which I think some people noticed today. It would have been nice to have some more dry track time but you can’t do anything about that. The track does feel quite slippery when it’s wet ; it’s definitely not very grippy in these conditions. Overall, it was a pretty normal Friday when you try different things and get as much running as the weather allows.”

Force India:
Nico Hulkenberg: “Another Friday practice where it was difficult to find a rhythm and get through the job list. In the morning the rain showers only gave us very limited time to run dry tyres, so I didn’t really get a feel for the hard development tyre. The track surface here is also very smooth and it was quite low grip this morning, especially with the damp parts of the track. With the rain showers this afternoon, all we could do was understand the wet and intermediate tyres in case the wet weather continues tomorrow.”

Paul di Resta: “A very short day for me with limited mileage in the wet. The track was drying up quite nicely towards the middle of the session and it was near to the crossover point for slicks until the rain returned. We’ve done our wet weather preparation so we just need to see what the weather brings tomorrow.”

Toro Rosso:
Daniel Ricciardo: “The morning went well in terms of doing a lot of laps and getting plenty of track time. We evaluated some changes to the front wing, doing a back to back test, in a sort of mini-aero test, to provide the guys with some data. Then, we were able to get on with the usual Friday programme and I stayed on the Prime tyre, rather than trying the experimental Hard that was available today. Considering how many laps I did, I think the lap time was not too bad and I am hoping we can be more competitive here than in Silverstone. This afternoon off the track? I just locked up the front and slid into the gravel. There was no damage done and I’m just glad I didn’t hit anything. The wet running went well and could be useful if we have rain for qualifying.”

Jean-Eric Vergne: “In the dry this morning, the car worked pretty well and the lap times don’t mean much, as I was running the Hard prototype tyre Pirelli brought here for evaluation purposes. I felt the car was strong in FP1, which means we have a decent car for dry conditions if that’s what comes for the rest of the weekend. Then, in the wet this afternoon, I was pleasantly surprised at how well things went on the Extreme wets. When I ran the Intermediates, we did not have the right balance on the car, but I’m sure we can fix that, in which case I would be happy if we had rain tomorrow afternoon for qualifying. It should be good!”

McLaren:
Jenson Button: “We got some good running under our belts today. Conditions weren’t perfect, but the forecast looks the same for tomorrow; so it was a very useful session for us and I think we gathered some useful data in terms of comparative tyre and set-up work. For us, trying to get the tyres working is one of our main issues, so we spent a lot of time focusing on that – it wasn’t all successful, but when things came together, our pace was good. We’ve still got some more work to do to be quick in the wet, but FP2 was a useful session in terms of telling us where we need to be heading. I think we should be happy with most of the parts we’ve put on today – most of them worked correctly – so it’s nice to see the improvement. I want to say a big ‘well done’ to the guys at the factory, they’ve done a great job. Hopefully we’ll be able to see the improvement in performance throughout the rest of the weekend.”

Lewis Hamilton: “The men and women back at the factory did an incredible job to get all the upgrades to the track this weekend – they all deserve a big pat on the back for that. It’s quite a positive step: it’s still difficult to accurately predict was sort of a step we’ve taken as we couldn’t back-to-back between the old and new components, but it’s definitely a step forward. Hopefully, we’ll get more of an indication as the weekend progresses – although, with more wet weather predicted for tomorrow, it might not be until Sunday that we can tell what we’ve got. Still, the car doesn’t feel bad at all. It’s tough in the wet out there; like driving around on an ice-rink – with puddles! – but I feel positive that we can do something good this weekend.”