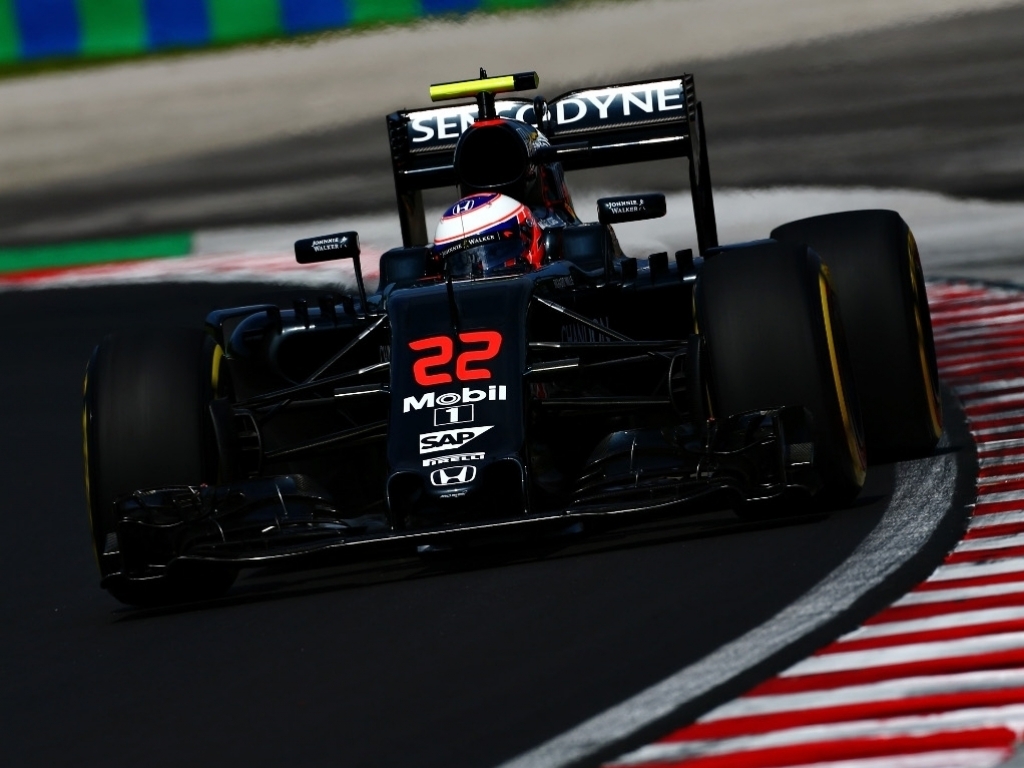 McLaren:
Fernando Alonso: “It’s been a hectic weekend already on our side of the garage, with a power unit change between the two sessions. I didn’t feel there was anything wrong with the engine in FP1, but after the session the data showed some anomalies and Honda therefore preferred to change it for FP2. Our positions today look reasonably good but we need to wait and see what happens tomorrow. There’s still quite a lot to do to improve things, especially on the set-up, but we have a few ideas. We’ll fight hard to get into Q3 tomorrow, and I think we’ll have a chance to make it, as we’ve done successfully already a few times in the past few races. Overtaking on this track is very difficult, so starting as close as possible to the front is paramount.”

Jenson Button: “I’m pretty happy with the way the car feels, on both long runs and low-fuel runs. Having said that, tyre degradation is definitely going to be important here on Sunday: it seems the soft tyre has very good degradation, but the supersoft is struggling just a bit. As always, the Hungaroring circuit is great fun to drive – and it’s giving us a good feeling as well, especially now that the track surface is gripping up. As for the asphalt itself, I like the new smoother surface – and it seems to be working for us, too. It’s pretty tight in the midfield – we ended up seventh and eighth both this morning and this afternoon, and everyone behind us was very close – so the closest fight is definitely behind us, not in front of us. Our goal is to qualify as well as we can, then score some good world championship points. I think we should be able to do that – that’s our aim certainly.”

Force India:
Nico Hulkenberg: “It’s been a fairly standard Friday, with no big surprises. The new track surface is a big difference compared to previous years. The bumps that were one of the features of this track are gone and the new tarmac is really grippy. I think times are already a couple of seconds faster than they used to be. The initial feeling with the car is pretty good – of course, there are the usual tweaks we have to make overnight, but by looking at both our short and long run pace, we seem to be in good shape.”

Sergio Perez: “It’s been a very useful first day of work, even though the red flag in FP2 came at the worst possible moment and reduced our short run work. We made quite a few changes on the car between runs, so there will be a lot of data to analyse to come up with the best set-up for both qualifying and the race. We managed to get a lot of information on our long runs and this should be good for the race. The new track surface is a lot smoother and there is a lot of grip so it’s a big improvement compared with last year.”

Haas:
Esteban Gutierrez: “It was very straightforward for me this afternoon. I was trying to get the most out of every lap that I had, especially with only one session to prepare for tomorrow. I think in general it was very productive. Charles (Leclerc) managed to get a few laps together this morning and was able to provide some good feedback so that I could have an idea of what to expect. I think we can be happy with today. Obviously, we need to keep working for tomorrow and trying to fine tune everything we have on the car.”

Romain Grosjean: “It was a decent day. The morning went well, the afternoon generally well. We didn’t get the best from our single-lap pace, but we’re going to work on setup changes tonight to make the car faster. I’m hoping that tomorrow, top-10 in qualifying is possible. Our first Q3 appearance would be very nice. Overall, I think we’ve had a good day.”

Williams:
Felipe Massa: “Today was a pretty normal Friday but definitely not an easy one. We’ve just been trying to learn more about the tyres, understand the balance of the track and try different things in the car. It’s not an easy track for us compared to others. The good thing is that nothing strange happened and nothing went wrong today, so I’m really hoping we can be competitive and score some good points.”

Valtteri Bottas: “Today we focussed on learning about the soft and supersoft tyres on both long and short runs. In the shorter runs, I wasn’t totally happy with the car balance so I hope we can improve for tomorrow, and I think that we can because there is room to. The timings look really close so any improvement that we can make will be a step forward. It was also quite interesting to try out the new asphalt today. There’s definitely more grip available, but it can also create issues with tyre wear on the supersofts.”