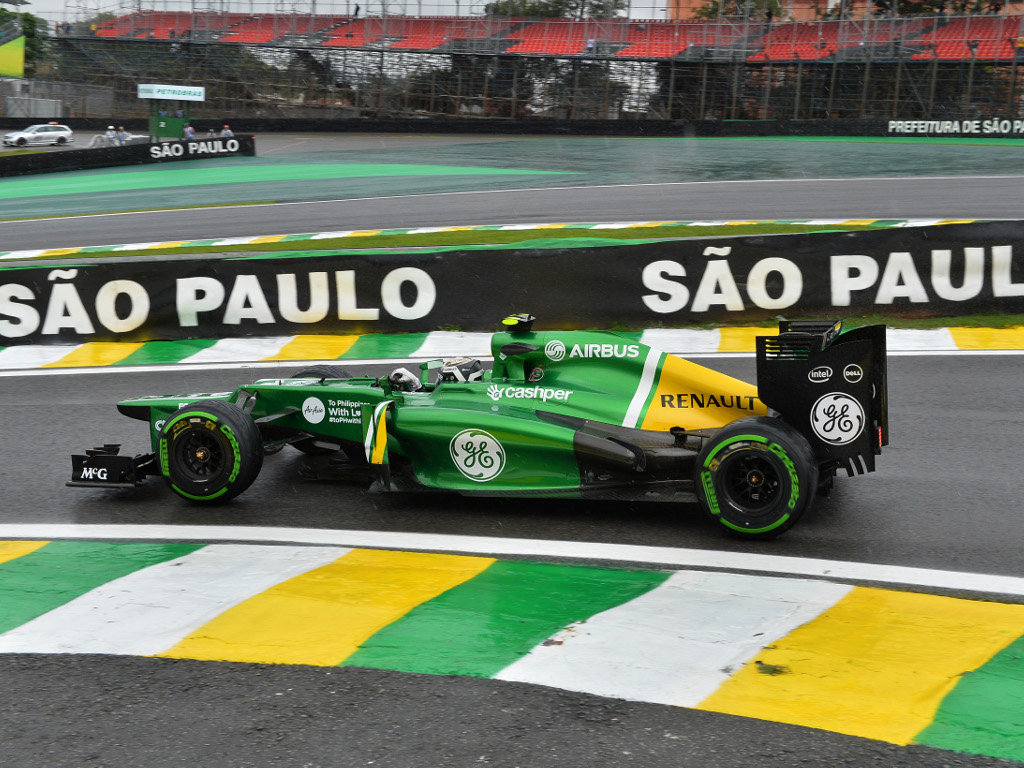 McLaren:
Sergio Perez: “It’s very difficult to know accurately how our car is performing – I didn’t do too many laps in either session, and those that I did were done in different conditions from our rivals. I’m not perfectly happy with the set-up – but, at least by doing some running, we have an understanding of what we can change for tomorrow. If the conditions stay the same for tomorrow, I think we’ll take a step forward. If the weather stays dry, we know where we’ll probably end up; but if it’s wet, we could have a stronger race. Our current forecast says it’ll be wet for qualifying, and that it’s 50:50 for the race. But you just never know in Sao Paulo…”

Jenson Button: “It was very slippery out there today – we even had high-speed aquaplaning along the straights, which was unusual. Fortunately, we got a lot of miles under our belts in this morning’s session – we felt the conditions were consistent enough for us to conduct some running on the Intermediate tyre. We did a longer run on high fuel, and also did a single-lap run on lower fuel – on each occasion, the car seemed okay. The afternoon session was more about waiting for the weather to settle down enough for us to continue running on Inters. That would enable us to back-to-back our morning run in order to measure the changes we’d made between sessions. We got some useful information. In these conditions, it would’ve been nice to have more tyres to play with – the wet weather presents more of an opportunity for us, but it’s also more of a risk, so we’ll see how the rest of the weekend pans out. Typically, the forecast suggests that it will be unpredictable for the remainder of the weekend.”

Marussia:
Jules Bianchi: “The weather has defined our sessions today but we have made some good progress for the different situations we may face during the rest of the weekend. Once the racing line started to dry a little we could have more confidence to push, but on my quick lap on the intermediate tyre I made a few mistakes, so there was definitely more to come. There is still quite a lot to focus on in terms of the balance so another long night of work to do with the engineers.”

Max Chilton: “It is an important weekend for us so with Rodolfo having taken over my car this morning, I spent that session focusing on the feedback being given to the engineers by him and Jules in light of the track conditions. This afternoon I was finally able to sample the track for the first time and it’s a great circuit but pretty challenging in the wet. We’ve made good progress in tricky conditions and worked through a few scenarios for what could be changeable weather over the next couple of days, although we are hoping we have seen the worst of the rain. Generally I’m really happy with the pace.”

Caterham:
Giedo van der Garde: “I drove here last year in FP1 and had a good session then so I already knew the circuit which meant we could get on with the programme quickly in FP1. The track looked wetter than it felt after the installation lap so we switched from wets to inters for the baseline run and I was pretty happy with the balance to start with. The rear was a bit unpredictable, a bit loose, but the front end grip was good, particularly in the high speeds and for me, in conditions like this which I really like, it felt ok. Run two was a couple of single laps with a stop in between to allow us to do some launches and live pitstop practice, but after the stop the car developed an upshift issue which meant I had to get it back to the garage in second gear. We took a look at it and found it was a software issue so it was fixed quickly which meant I could put in a final run at the end of the session, finishing up with 18 laps which, considering the condition of the track, wasn’t too bad. FP2 started well. We waited a bit at the start of the session and then headed out on wets and I had a decent outlap, giving me good grip and giving me a car I could push with right from the first flying lap. There was a little bit of tyre dropoff, but I was pretty happy with the performance and the balance on full wets. For most of the rest of the session we waited until the water levels on track had dropped enough for inters and went out for the last run with 15 minutes left, putting another 12 laps on the board in the sort of conditions we had on race day last year, and which we’d obviously like again this year. I have to say that the car feels really good in the wet – the last couple of times it was like this was Spa and Monaco, two of the real highlights for me this year, so if we get that again I think Sunday could be really interesting.”

Charles Pic: “We started FP1 with the usual installation lap, using wets to begin with but the track conditions were ok so we went to inters for the first full run. The initial balance was ok but towards the end of the run we stopped for another set of inters with lower tyre pressures and that gave an improvement in front grip, but at the expense of overall balance. At the end of that first run the rain started again so we changed the runplan so we could run through some procedures and make sure we didn’t use up the tyres. We waited to go out again until the end of the session when the rain had stopped falling and for me it was a pretty useful session, particularly bearing in mind what might happen with the weather this weekend. Like most of the other cars we waited for the rain to stop at the start of FP2 and then headed out for our first run on full wets. The track was very wet with the car aquaplaning in quite a few places but we put in a couple of laps before a sensor issue meant we had to come back in. By that point the weather wasn’t good enough for inters and, wanting to hang on to as many sets of wets as we can for Sunday, we opted to wait until the last 15 minutes before heading out again on inters. We’ve accumulated enough data from today’s wet running to give us a lot of really useful information for the rest of the weekend – now we’ll have to see what the weather does tomorrow and Sunday.”