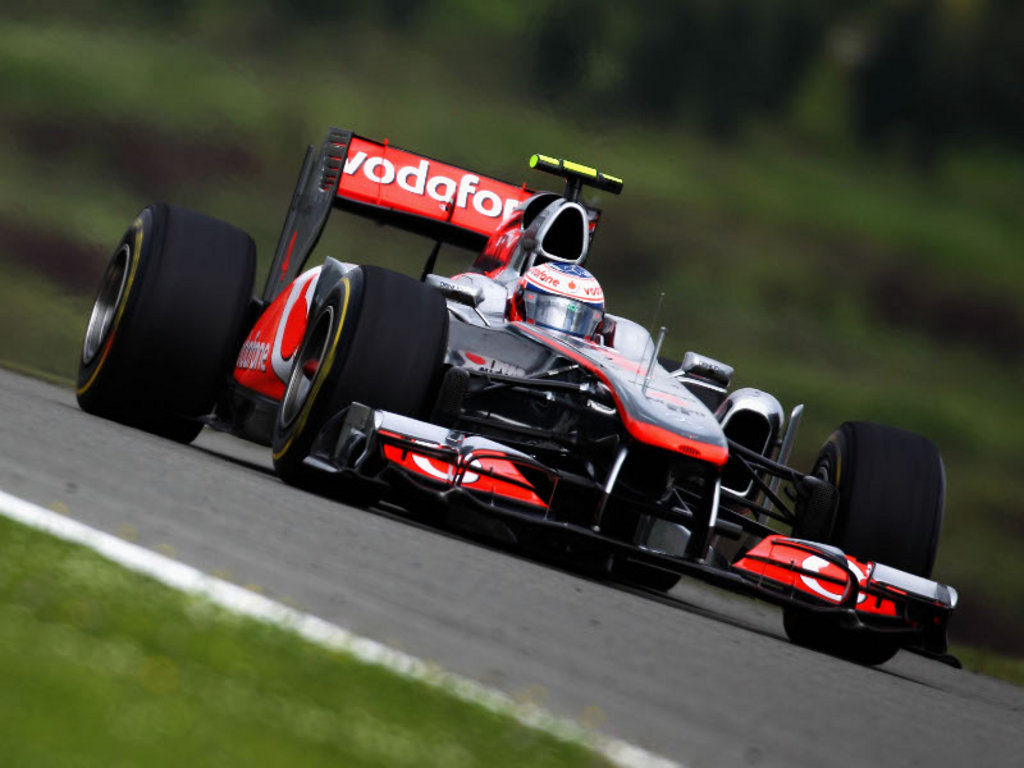 Jenson Button set the pace in the dry in Turkey, finishing Friday’s running ahead of Nico Rosberg, Lewis Hamilton and Schumi…

Jenson Button set the pace in the dry in Turkey, finishing Friday’s running ahead of Nico Rosberg, Lewis Hamilton and Schumi…

McLaren:
Jenson Button: “I’m pretty happy with how today went. The car’s been working reasonably well – there are always things you want to improve, but we’ve made some good progress and have a lot of useful data to go through. Trying to get the car to ride the bumps well into Turn 12 has been difficult, but we improved it through the session. Turn 12 is really bumpy – it’s like they put a motocross jump in there! And Turn Eight’s quite tough too because, depending on your balance, it can damage the front and rear tyres. It’s about getting the balance right, which we concentrated on today. We haven’t put everything on the car that we wanted to this weekend, which is disappointing, but we still have some useful upgrades so it’s nice to keep moving forwards.”

Lewis Hamilton: “We saved tyres during this morning’s session. In the afternoon, despite the limited running in P1, we got quite a lot of our run-plan completed, which was very satisfying. I initially struggled a little bit with set-up, which we can look at and fix overnight, but I was really pleased with my long-run pace – I think it was probably one of the best practice long-runs I’ve ever had. Generally, our car has a pretty good baseline. We’re still in the fight: the most important factor this weekend is to continue with our consistency – getting on the podium is my target, and if we can win that’ll be even better!”

Mercedes GP:
Nico Rosberg: “We have made a decent start to the weekend and I am optimistic for tomorrow. We had a productive afternoon and tried a lot of things with the car. I didn’t have too many problems with the tyres on the long run and I was quite surprised by the grip levels, which were higher than I expected. The wet tyres had a lot of grip this morning too. I’m happy with what we learned and expecting a very interesting time tomorrow and on Sunday.”

Michael Schumacher: “We had quite a positive Friday, and it was especially good that we were able to test both wet and dry tyres. I hadn’t really driven the wets so I’m pleased that I finally had some opportunity to use them. Also, my sessions were quite eventful with three spins in Turn 11. All in all, our car confirmed the performance improvement from China, so we can look forward to the rest of the weekend. We still have some questions relating to the set-up but I am confident we will sort them out tomorrow.”

Red Bull:
Mark Webber: “We learned quite a lot today. It’s a pretty challenging venue here with the new regulations – so it was tricky for us all with the weather this morning. We had to fit a lot of our planned work in e to this afternoon, but it went smoothly. Sebastian had an issue this morning which could happen to any of us; it just shows you can lose a session very easily. The team will share the data that we gathered this afternoon. KERS worked pretty well this afternoon – each time we use it we get more experience so, so far so good.”

Sebastian Vettel: “There wasn’t much I could do to stop the car from hitting the wall this morning – but the most important thing is that I’m fine. Unfortunately we couldn’t get the car ready in time for this afternoon’s session, as there was too much damage, so I’m sorry to the guys. It makes things a bit more difficult, but I don’t think it will be a problem, we know the track well from other years and, in the end, it was only one afternoon that we have lost. I’m still confident – it looks pretty close. I was able to watch the times today, which was something different.”

Ferrari:
Felipe Massa: “From what I could see, we have made a step forward in terms of performance, but we are not yet close enough to the best. It is always difficult to say how much progress one has made after just two free practice sessions: we will have to wait for qualifying to get a clearer picture. We are working very hard to catch up and I think we are on the right road, but the others are definitely not standing still. For example, Mercedes seems to have made a significant step forward here. Would I prefer a wet race? Sure, if it turns out we are not competitive then the rain would open up more possibilities, but it could also go well in the dry and it does seem as though the weather is improving. This is a very demanding circuit, but I really like driving here because there are so many different types of corner.”

Fernando Alonso: “These two sessions were very different one to the other, because of the change in the weather. It was useful to do some running in the wet because there is a chance that it might rain again at some point tomorrow. We tried various new solutions and now we have to evaluate them carefully to see what worked and what did not. I had a hydraulic problem which cost me some time in the pits at the start of the second session. That contributed to the fact it’s difficult for me to give a precise evaluation of tyre behaviour. Then, I also had a spin, when I was being too optimistic in my use of the moveable rear wing. For sure this track puts a heavy load on the tyres: it will be interesting to see what happens in the race. I think we have made progress, but there are various teams that are quicker than us. We have to try and do our best, putting together the best package made up of new components and those we have used before to try and get all the potential out of the car.”