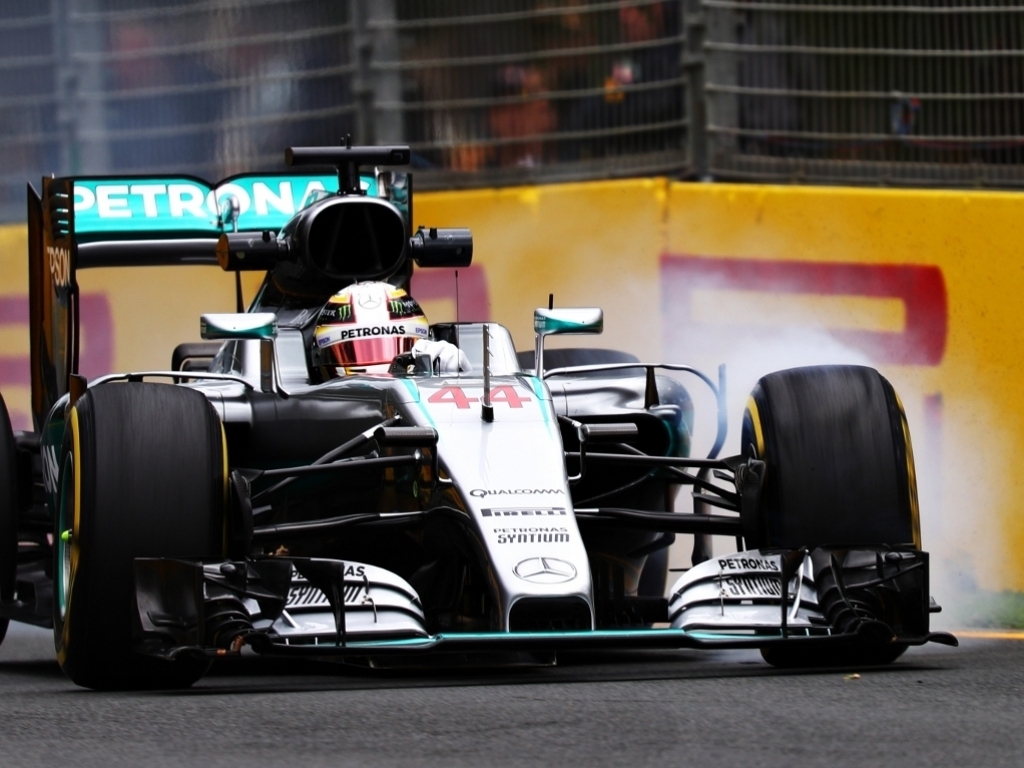 Lewis Hamilton began his title defence with a perfect run in Melbourne on Friday, quickest ahead of Nico Hulkenberg and Kimi Raikkonen…

Mercedes:
Lewis Hamilton: “That was a good day. The car performed well and although we didn’t get a huge number of laps in, they were still quite constructive sessions. I was lucky to get a couple of dry laps to get a tiny feeling for what the balance is like around here, which was down to some good work from the team to time my runs right. Generally, though, I’m just excited to be here and to get back in the car. When I was sitting in the garage, I felt like a kid waiting to open his presents at Christmas. Hopefully it’ll be a dry day tomorrow so we can get plenty of laps in and give something back to the fans who have braved the weather today.”

Nico Rosberg: “That wasn’t a good start to the weekend for me. It was very wet out there, which made it tricky. It’s a shame that I lost the car in P2. I just applied a little too much throttle through Turn 7, spun round and touched the wall. My front wing was quite damaged, so unfortunately the boys will have some extra work to do tonight. My apologies go to them and a big thank you for their hard work. I’m now looking forwards towards qualifying and the race to put in a better performance.”

Force India:
Nico Hulkenberg: “Really challenging conditions today with the wind and the rain. It was so gusty and the car was being moved around a lot by the wind, even on the straights. So the conditions were not the best for testing and learning. This morning we did a very short run on the soft tyres, but the track was very damp and so it was not really a representative dry run. Then, in the afternoon, we worked with the intermediates, getting a feel for the car in the wet conditions in case the rain comes back again tomorrow. So it was one of those slow days where you just had to make the best of it. Tomorrow is a new day so let’s see what the weather brings.”

Sergio Perez: “It has been a difficult day for everyone because of the changing weather. Just when it looked as though the track was starting to dry, the rain started again. So it was quite frustrating and we could not carry out all the testing we had planned. We made the most of the conditions and we looked quite competitive on the intermediates, but you can’t read too much into the times because it depended on when you were out on track.  We are still not sure what the weather will do tomorrow, but if it’s dry then we will start from zero again and it will be a very busy day. If it does rain again, the set-up work we have done on the intermediates will be very useful.”

Ferrari:
Kimi Raikkonen: “Today the weather conditions made it very tricky for everybody and unfortunately we couldn’t do many laps. It was a pity not to have been able to run in proper conditions, for all the spectators and for all of us, but we cannot change the weather. The car is the same we had in testing, but it was the first time with wet tires and it seems to be ok. Let’s see what the weather is going to be like tomorrow, hopefully we can get some dry running, get the car correct and go from there. Tomorrow for the first time we’ll try the new qualifying format, it will be different so we have to see how it pans out. Obviously it’s the first time and it may be a bit of a hustle for some people, hopefully we get it right.”

Sebastian Vettel: “The sun came out after practice, but earlier on it was raining every now and then which was enough to wet the track or parts of it. For sure these conditions are not ideal, but in the end what can we do? It is the same for everyone. Still, I don’t think that the day was completely lost: it was good to get at least some laps and to feel the car, but in terms of preparation for the weekend and the race there was not too much to learn.”

Red Bull:
Daniel Ricciardo: “Today was the definition of Melbourne. Four seasons in one day, that’s what everyone says and we got that today. It’s a shame we didn’t do that much constant running, but I’m not too frustrated with the position we’re in. The laps we did, I was pretty happy with and the car is in a decent place. It’s just nice to be back in the car again to be honest and I was very happy to put the helmet back on. I think tomorrow will be a little bit of a mixed bag for everyone. We did get enough running to feel all conditions and if it is variable throughout the weekend then we’re prepared for that. I took a little trip to the gravel this morning, but I noticed there were a lot of fans at Turn 12 and I wanted to say hello to them.”

Daniil Kvyat: “Everything went well today I think, the car felt good out of the box so it’s promising. Obviously there wasn’t much running but it was the same for everyone and every lap we tried to take the most out of it, to learn as much as we could and we can put this data in our pocket for qualifying tomorrow and for Sunday. There’s not many indications from today, it’s impossible to predict what others were doing, what they’re going to do and so on, and so it wouldn’t be wise to draw any kind of conclusions. We still don’t know what the weather will be like tomorrow so we just have to be patient and see what the day will bring us.”