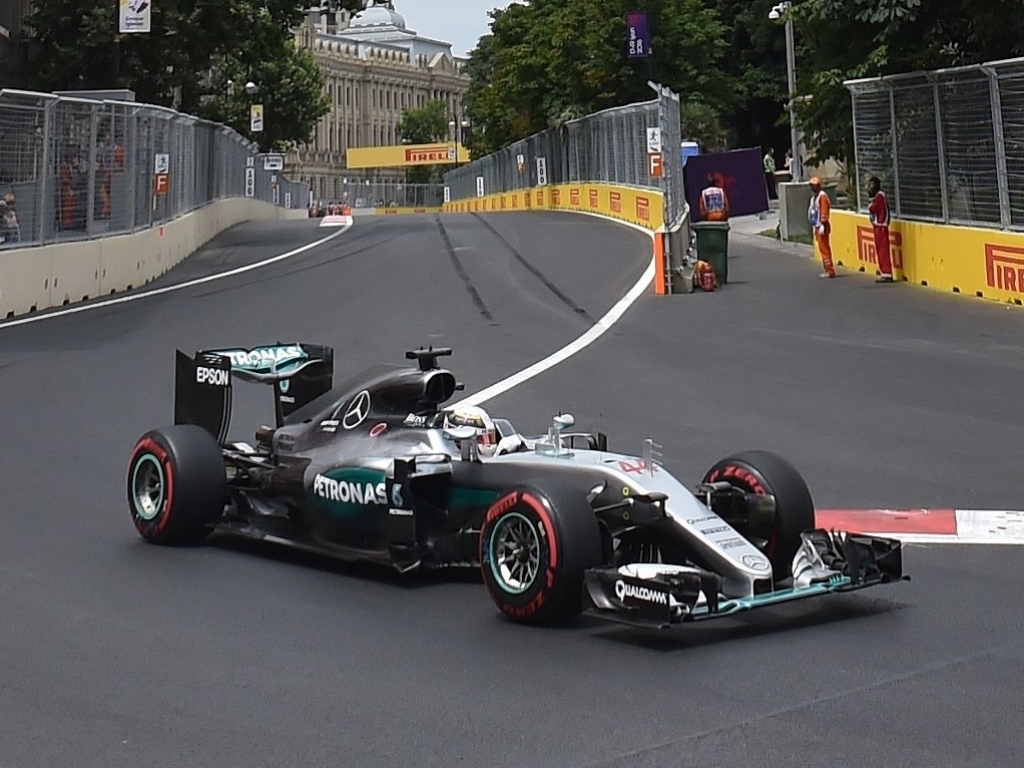 Mercedes:
Lewis Hamilton: “A good day for me and a nice way to start the weekend. The track isn’t easy – not because the layout is particularly difficult to learn but because it’s very slippery out there. It’s quite Monaco-esque in terms of braking and how close the barriers are – but you’re arriving at much higher speeds. Otherwise it’s like a mixture of Valencia and Sochi with the smooth track surface and the style of the corners themselves. It’s a real challenge and I think it’s going to be tough for everyone over the weekend. It takes a lot of focus, which is something I like. I’ve enjoyed driving here today.”

Nico Rosberg: “The track is pretty cool. There are just some safety concerns at a few places like the pit entry, which we have to look into. One-lap pace was a bit tricky for me, as I only had one set of soft tyres to use. But on the long run with the supersoft I was feeling good out there. Unfortunately my second session was a bit compromised this afternoon as I had to stop the car after I lost power. We are still investigating what happened there. I was a bit surprised by the order today, seeing Force India just behind us. I don’t really know what to expect from Red Bull and Ferrari over the weekend, as they’ve been our closest rivals so far, so we’ll see.”

Force India:
Sergio Perez: “I knew when I walked the track yesterday that it was going to be good fun to drive – and today didn’t disappoint. It’s an amazing circuit: really challenging, no margin for error, and a real pleasure to drive. I kept things tidy today, but it’s easy to make a mistake and we saw that when cars do run wide they really pay a high penalty. It’s been a very positive day for us. The car felt good as soon as we started the first session and we were up there straight away with competitive times. That’s a good sign for the rest of the weekend and I’m feeling optimistic about our performance.”

Nico Hulkenberg: “Coming here to Baku has been great fun and the track is very cool. It’s got a bit of everything, with long straights, big braking zones and some exciting high-speed corners, which all the drivers enjoy. So, overall you have to say they’ve done a really good job with the circuit and it makes a nice change to come here and try something that is so different. In terms of our performance, I’m pleased with how things went today: the car feels well balanced and we made some improvements between the two sessions. We have good speed in the car and we are on the pace with some competitive lap times. It’s a good starting point heading into the weekend.”

Williams:
Valtteri Bottas: “It was an interesting day for me, I really like the track. It’s very demanding, it has some high speed corners and some twisty, more technical areas, so it’s definitely one of the most challenging tracks on the calendar, but at the same time it’s a lot of fun. Even though I felt good today, we can still improve the car a lot and get more from the tyres. I have high expectations for the weekend, but we have to keep working because at a new track there’s always more to learn, which I enjoy. It’s interesting finding out all the secrets corner by corner. We need to work hard to keep finding more lap time from me and from the car because we have the opportunity for another good result this weekend.”

Felipe Massa: “It was a very difficult day for me. I was struggling to get the tyres to work and I’ve never had a problem like this so far this season, so it’s something that we need to analyse. I couldn’t drive the car how I would like because the tyres weren’t within the working range, so whenever I was out on track I was struggling massively. All the other drivers were learning a lot and improving every lap but I couldn’t. There’s a lot of work to do before tomorrow, but I’m sure when we have looked at everything and made some changes, I’ll be competitive. It’s a nice track, of course you enjoy it more when everything is working properly, but the track is interesting. It’s not easy to find the lines in certain corners, particularly the slow sections.”

Toro Rosso:
Carlos Sainz Jr: “It was a new challenge for all of us out there today, as it was our first time driving at this track. It’s a high-speed circuit with very close walls and tight run-off areas, which requires maximum precision and concentration. The long straights here in Baku also make you run low downforce at a street circuit, which is something new in Formula One. So, it was an interesting day. I took it little by little in both FP1 and FP2 and had quite a bit of fun trying to find out where the limit is. In general we kept it “more or less” clean and we were able to learn a lot for tomorrow. We expect different conditions to today, which was very cloudy, windy and therefore more difficult. I’m pleasantly surprised with this track, I like it. Before today I had only driven it on the sim and I have to say that doing it for real is much better: in the sim the walls are transparent, while here you have the excitement of being so close to them… the adrenaline rush you feel around these streets is big and I really enjoyed it out there today! It’s a fun challenge and I look forward to tomorrow!”

Daniil Kvyat: “FP1 wasn’t the best of sessions because we struggled a bit to find the right set-up of the car. However, this afternoon’s FP2, was much more productive, even though we were still lacking some pace, which we are confident we can find. We now just need to try and put everything together for tomorrow. We collected important data which I hope will be useful for the rest of the weekend. We know which direction to go in and we will work hard tonight in order to get it all right.”