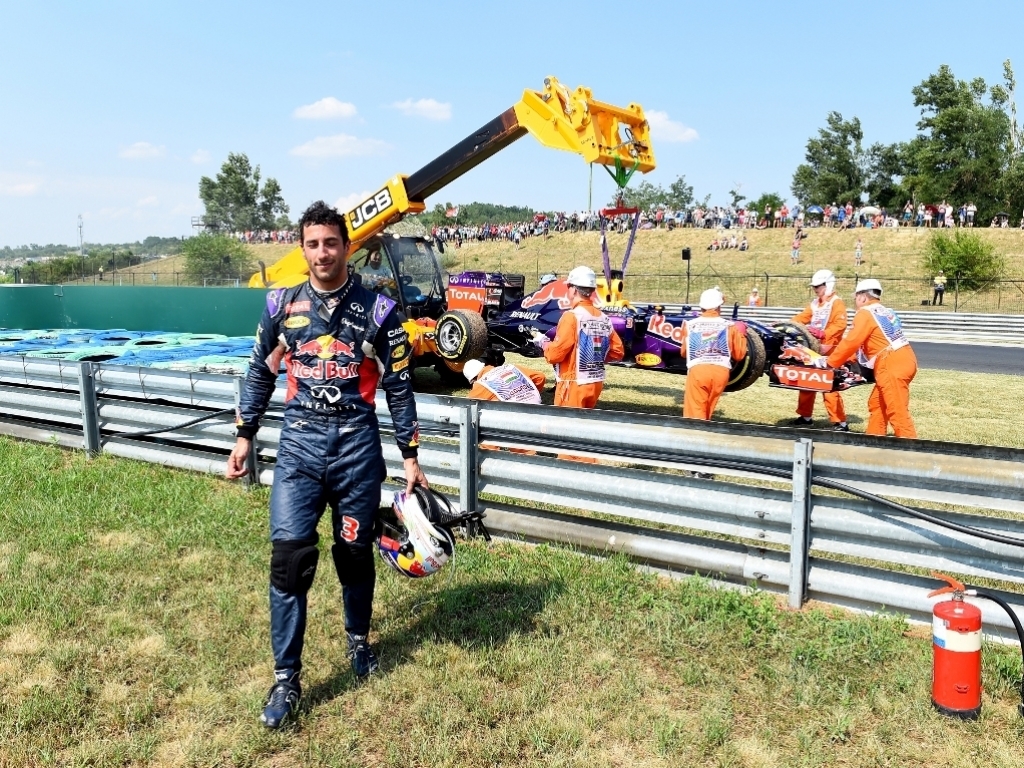 It was another Mercedes P1 with Lewis Hamilton fastest, but the Red Bull duo of Daniil Kvyat and Daniel Ricciardo impressed despite an engine issue for the Australian.

Mercedes
Lewis Hamilton: "It was really good fun out there today. I'm starting to think this might be my favourite track. It's so fun to drive with the combination of corners and undulations. The way it all flows together just feels old school. It's incredibly hot, though – like driving in a sauna! You're drenched in sweat before you even get in the car with all the thermals on and I lost about half a kilo just in that session. It's a big challenge to get a good lap here in these conditions and I think everyone has struggled a bit. It's meant to be a bit cooler on Sunday which will be easier to cope with physically but will obviously change the balance a bit, so it should be interesting. Our car feels strong here though and I'm very happy with it so far."

Nico Rosberg: "Today was a difficult day for me. I didn't ever really find the right balance, moving from oversteer to understeer. The long run pace was okay, so I can build on that. But I definitely have some work to do to improve my setup before tomorrow morning and get some practice in for qualifying during P3. It's really hot out there. In the car you are sitting almost on the asphalt, so you can feel the heat very much. It will be a demanding race on Sunday."

Red Bull
Daniil Kvyat: "It was a good day for us today, the car performed well, however it’s only Friday and we have to keep pushing so that we turn that into a good result in qualifying tomorrow. Both our cars looked competitive, straight-line speed is less important here and that suits us. It’s a tough weekend for all the drivers, Jules is on all our minds, and we are all affected."

Daniel Ricciardo: "The car felt good today. The balance is better and it’s an easier car to drive than in recent races. We didn’t make any big changes, just a few minor things that seem to be working well. This track suits us, as it’s less of a power circuit. It’s quite a bumpy track but we seem to be doing okay. We were using an old engine so we won’t have any penalties for that.  It’s been an emotional week for all of us drivers; it’s important to race well for Jules this weekend."

Ferrari
Kimi Raikkonen: "It was not a very clean day, in fact it was a slightly different Friday than normal. We had some issues and missed some running, but we were more or less able to follow our program. The feeling with the car was not too bad and the tyres were behaving pretty ok, but the laptimes are still not right. I don't know exactly what happened with my front wing, it just broke suddenly and came off damaging the tyre. The team is looking into it and hopefully they will find out the reason. Today it was only Friday, we had been trying many different things to see where we are. I think we can improve for tomorrow and find a bit more speed for the rest of the weekend."

Sebastian Vettel: "Well, all in all we didn't have the best day. There were two or three things that slowed us down and cost us some time. We were stuck in the garage this morning with a shortage in the electric system, and this afternoon Kimi had a problem with the front wing, so we both couldn't run as much as we wanted. Now there is a lot to clean up, but for tomorrow we should do well and have a decent qualifying. Concerning Red Bulls performance, it was a bit expected but it is Friday and you don't know what people are doing with their fuel loads, still you could see already in Silverstone that they did a step forward. We didn't get into the rhythm today, now we need to sort out things for tomorrow, then we should have a much smoother weekend."