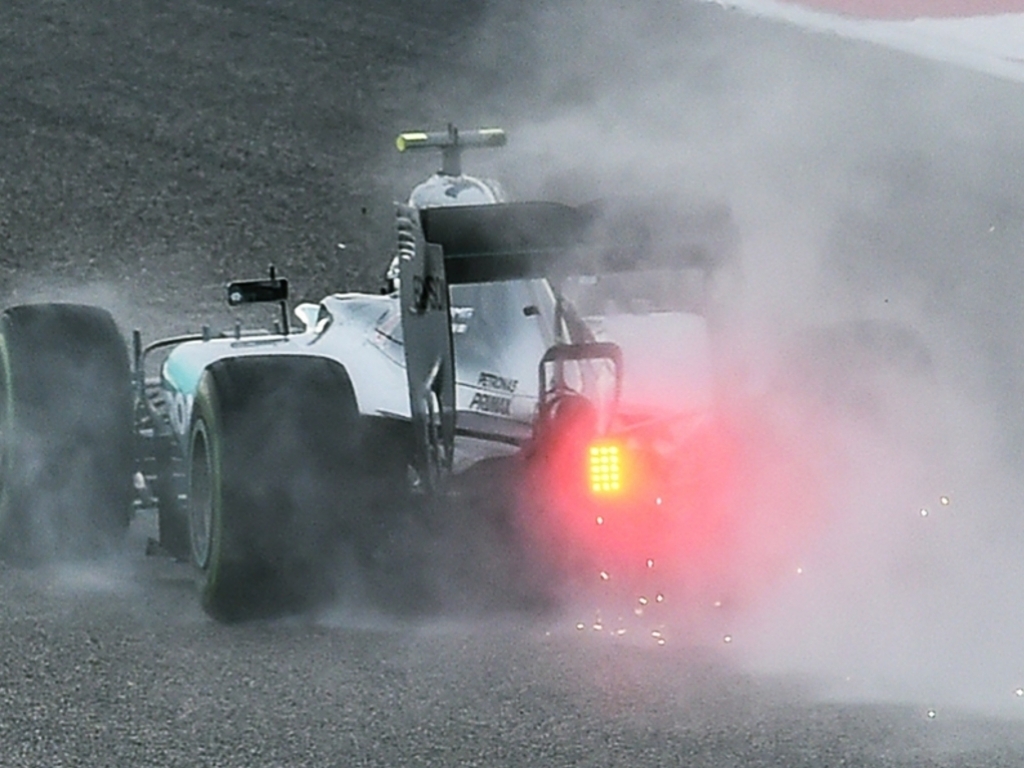 FP2 was a total washout so Nico Rosberg’s time in FP1 was the fastest at the Circuit of the Americas on Friday.

Mercedes
Nico Rosberg: “For me it wasn’t a bad day. I did my homework in the morning session, had a good quick lap and also tried a bit of work on setup. But it’s a shame for the spectators out there. They pay a lot of money to be here and didn’t see a single car driving in the afternoon. So let’s see what tomorrow brings – but the forecast is not good…”

Lewis Hamilton: “It’s been a beautiful day… I love it when it rains! Just not on practice day! The weather has just been unbelievable. I don’t think I’ve ever seen rain like this. It’s kind of cool to watch, in many ways, but I feel terrible for all the fans who turned out today. I didn’t complete many laps in the morning as the track was drying out and I wanted to save my tyres for the afternoon session – but in the end we didn’t get to go out. I would actually have liked to, just to see what it would have been like in those conditions, but of course the safety of the marshals and everyone else has to come first. I was surprised by how much grip there was on the intermediates in the few laps I did get, though. The track surface varies massively between circuits and I think this is the most grip I can remember having on those tyres. It really did feel very good, so we’ll have a lot of fun if it’s like that in the race. There’s not a lot you can do in these situations. You want to be out there but you just have to sit and try to enjoy some down time, then make sure you’re fresh and ready to go the next day. We’ve got very little information to work with now, so the rest of the weekend will be intense. But it’s the same for everyone, so we’ll just have to make sure we make the best job of it. Fingers crossed we can get out there tomorrow and on Sunday. If the rain really is going to be heavier tomorrow like they’re saying then maybe I’ll take the day off and go to the movies. But the main thing now is that we’re able to have a race!”

Red Bull
Daniel Ricciardo: “This weather is beautiful for the farmers. They need some water on their dry farms. It’s obviously a shame for us and the fans. I think on days like this you feel more sorry for the fans, because especially on the Friday, a lot of people take time off work to come and see us, so I feel for them. But we’ll definitely race. The forecast for tomorrow looks quite bad already but if we have to qualify and race on Sunday then that’s what we’ll do – if it’s like this tomorrow maybe we can go downtown and listen to music all day! The laps we did this morning were quite good. We know that in these conditions we are strong. With mixed conditions on Sunday we should be okay. I like this circuit and it’s one of my favourites. The car has been a lot better straight away in the last few races, so even if it’s dry on Sunday I think we’ll be able to attack.”

Daniil Kvyat: “There was not so much to do out there today but we did a couple of laps in FP1 which was good for me to get on the track for a bit. But in FP2 there was obviously so much rain that we couldn’t even drive. We had some fun in the garage this afternoon because we didn’t get out at all, it was good to spend some time with the guys but obviously we would like to drive! If tomorrow is the same I guess I’ll bring my laptop, some movies, some magazines and a book and then we’ll see! The forecast is showing a chance of this sort of weather for a while so obviously we have to take every lap we can. It’s important to make the most out of what we did this morning and we also have to be ready in the event that everything is cancelled up until the race itself. This kind of weekend usually always makes the race more interesting.”

Toro Rosso
Carlos Sainz: “We were only able to do three complete laps today because of the weather conditions. It’s a shame, because this is a new track for me so it’s important to get as much mileage as possible out there – but ending up P4 in FP1 is a good achievement. The car felt good in the wet and this gave me confidence. The fact that we didn’t get any running in FP2 is not ideal, but we just need to wait and see if the rain stops tomorrow.”

Max Verstappen: “It was good to be back driving here in Austin again. It’s a shame about the weather, as we were not able to complete many laps because of the rain. But the car was performing well in the wet, so we can be happy about that. You never want this much rain on a Friday, especially during my rookie year when the most important is to get as much mileage under your belt as possible, but we just have to deal with it.”