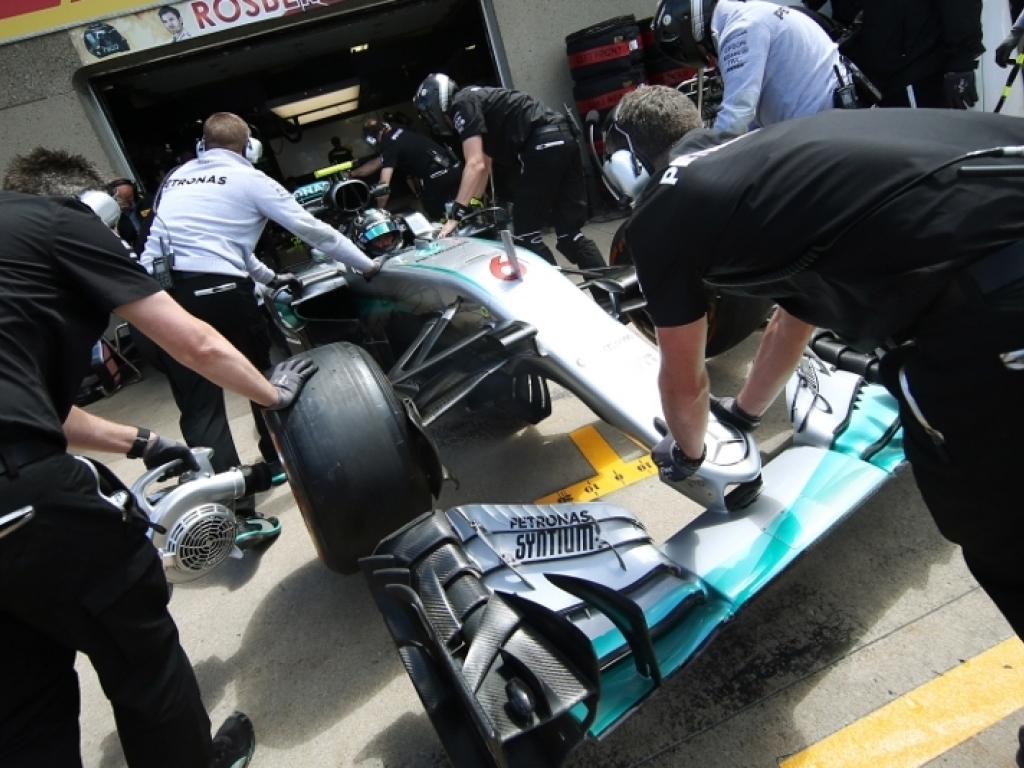 Title contender Nico Rosberg topped the second practice session ahead of his teammate Lewis Hamilton, who was only a fraction of a second slower.

Mercedes:
Nico Rosberg: “A good start to the weekend. It’s great to be back here in Hockenheim at this historic track. The tarmac is old, so the way the tyres work is completely different to in Hungary where the tarmac was new. Here it’s much more snappy and more of a challenge. But in general our car was working well out there today. Saying that, in Hungary we were very quick on Friday but then on Saturday and Sunday everyone was very close. So, we are warned by that to not get over-excited on a Friday. It’s a good start but we’ll see more tomorrow.”

Lewis Hamilton: “It’s been a very chilled Friday. The weather has been good and the track feels great. It’s the original track surface, so it’s nice and bumpy and has lots of character. We had a fairly straightforward two sessions today. No real surprises and a good first step for the weekend. We’ll see where we are in qualifying tomorrow.”

Ferrari:
Sebastian Vettel: “Overall the outcome of the two sessions has been positive, but we still need to improve our car overnight and do some steps forward. I think the one-lap speed was okay, I haven’t seen much from the long runs, I have spent most of the afternoon on Soft tires and they were lasting quite long, so I think overall it was ok but we still have to improve. We have to work on the set up of the car, and bring it a bit better together, so that the car feels better for me on track and it suits my driving, then I can attack better and more. As for the new rules on radio communications, it makes it easier for us, in terms of remembering, so I think it is a straightforward decision.”

Kimi Raikkonen: “On Friday it’s always difficult to have a clear idea of where you are, from tomorrow we’ll understand more, but the session today was not too bad. For sure there’s some work to be done to improve, but more or less we are about there. Obviously we want to be in the front, so this evening we are going to focus on fixing some things and improve in certain areas, then I’m sure we’ll be okay.”

Red Bull:
Max Verstappen: “A good start to the day and weekend in general. The first session I was learning the lap with the car, we had a bit of front locking that we will hopefully get rid of tomorrow. The second session was good, definite progress from the first as I continued to learn the track and get used to the car here. Everyone knows this track is quite hard on the tyres so no real surprises there. We are not too far off Mercedes, we are matching Ferrari and the long runs were all pretty positive. We will have to wait and see how some of the rules work, from what I have heard in general it shouldn’t be too bad. I think the radio rules make it nicer for the fans so they can hear what is going on and not just listen to commentary. I think the fastest way around the track is within the track limits so we will try and keep to that. I don’t mind what the other drivers have said about last weekend, I’m happy and confident with my driving and defending, they can talk to me if they want but I don’t feel any pressure from them.”

Daniel Ricciardo: “I enjoy the track around here actually. It’s cool and it’s got pretty good flow. The last sector is fun, but it’s tricky with the tyres. You’ve got some tight corners which seem to be harder on the rear tyres but then the last sector has got a lot of longer corners where you can hurt the front, so trying to balance the car isn’t always easy. But I felt we got on top of it more in FP2 so I’m pretty happy where we are now. We looked quite close to the Mercs on high fuel so that was promising. This afternoon’s race stint looked really good so if we can replicate what we did then on Sunday I think we can have a strong chance in the race. I’m obviously trying to keep up with all the rule changes but I’ve never been too fussed really. I think if it’s the same rules for everyone then let’s go and race and deal with what we’ve got.”