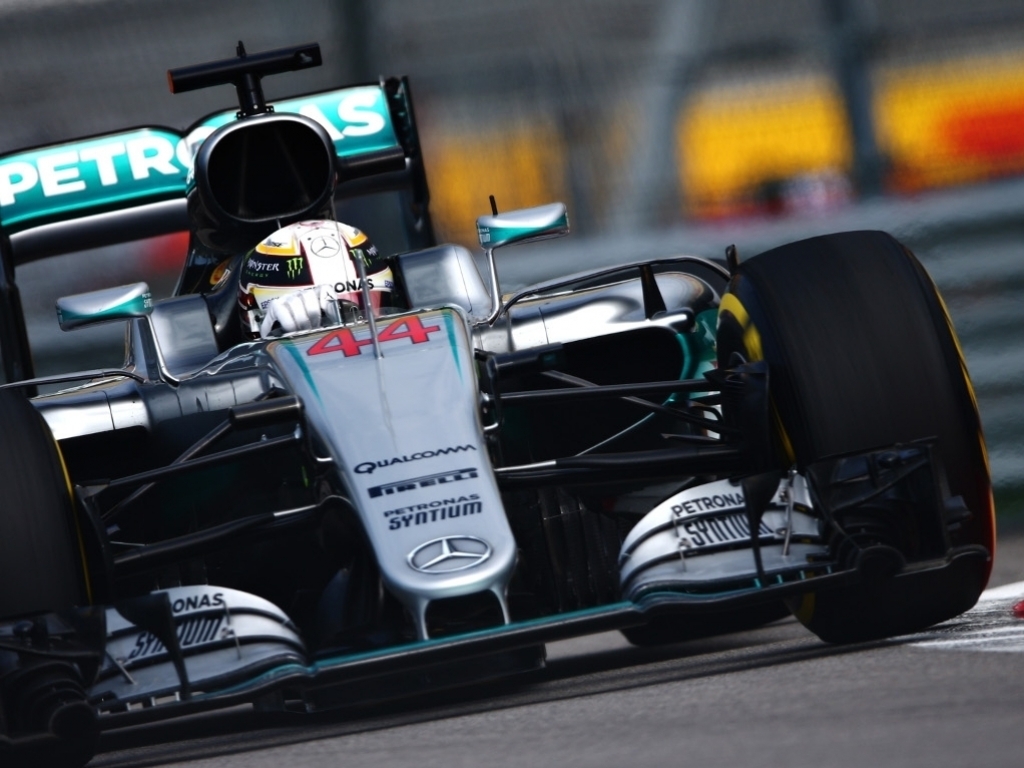 Mercedes:
Lewis Hamilton: “It’s good to be back in the car after what’s felt like a pretty long wait since China. It’s been a constructive day to start the weekend, too. We got through most of our programme except one last little bit at the end as some of my tyres were flat-spotted but no big drama there. I think we’re looking strong here – but we need to keep working hard if we are to try and stay ahead of the Ferraris. They look like they might be another step closer this weekend. We’ve got a few things to look at to make sure we perfect the setup for qualifying, so we shall see how it goes…”

Nico Rosberg: “It’s been a solid start to the weekend. It’s difficult to get it right at this track, as there’s only a small window where the tyres work perfectly and a lot of places where you can easily make mistakes. I didn’t manage to hook up a full quick lap on the supersoft in FP2. But, aside from that, it was a good day. The car felt good on a quick lap this morning and again on the longer runs this afternoon, so that’s very encouraging. It’s great to back here in Russia and I very much look forward to the rest of the weekend.”

Ferrari:
Sebastian Vettel: “Looks like we had an electric problem, but I am sure we can fix it. Still, it is a shame, because now we are lacking some laps, especially in the long runs on race trims, which would have allowed us to see how competitive we are. But Kimi did the homework for the team, so it is not too bad. Also, here in Russia we know roughly what to expect. I think we can still learn a lot from what other people did. In qualifying trim we still have some stuff to improve. I think the car was getting better though. The track was quite dirty in the morning and then during the day it came more towards us. I felt happier as the day continued, it’s true that for the race we are lacking a bit of information, but we will see tomorrow morning, when we have another practice session.”

Kimi Raikkonen: “It was not an ideal day, one of those days you struggle to make the tyres work and get the car where you want. I wasn’t doing any proper lap, but today it’s only practice, I’m sure we can improve for tomorrow. Overall I think we just have to work on the set up to make it as we want and then it should be ok. We have a new engine and new parts on the car, so far it has been working well. We wouldn’t use any new thing if we did not expect it to be good.”

Red Bull:
Daniel Ricciardo: “The engine and everything sounds a bit different, you don’t have the interference with the wind. In all honesty the vision is fine, that seemed OK, so first impressions was fine. It was definitely driveable. Once you’ve got the structure in place it’s pretty much where the mirrors are so, I wouldn’t say you’re limited any more than we are now in terms of visibility. It’s obviously a bit different having that in front of you  but generally it was as good as we could have hoped for. I think it’s one of those things. Sure, the talk has been about the open cockpit and that’s what people know F1 for and all that. That’s fair enough. It would be great to keep it as it is but with accidents that have happened, especially more recently, I think at least not to explore this route seems a bit disrespectful I would say. If this becomes the norm everyone will get used to it, I don’t think it’s as bad as some people are saying — it could happen, quite easily.”

Daniil Kvyat:  “I think time will show obviously, I think Friday maybe wasn’t the most real thing but who knows maybe it will pay off later in the weekend. I think we have to decide first… Anyway we had both compounds on Friday [soft and supersoft] and I think the super-softs work fine. Short runs, long runs, we changed the tyre to see which one works better or different, so it will be interesting on Saturday to understand a strategy for qualifying. It seems like we can play around a little bit more than usual here and the race pace will be interesting too so there are plenty of things to think about.”

Williams:
Valteri Bottas: “It was a good Friday. We managed to test everything we had planned to, including a number of new aero parts. The results from these tests are looking good which is positive. Tyre behaviour is the key at this track and that will be our focus tonight. We’ll be trying to get a bit more out of the shorter runs and maybe we can also still improve on the longer runs, although our long run pace is looking good at the moment so I’m hopeful that we can do well over the weekend.”

Felipe Massa: “I think it was a positive day. I’m happy with how the car is performing in the short runs and the long runs with the tyres. I think that maybe this is a better track for us than other tracks. But we just need to wait and see, and try to do the best we can.”