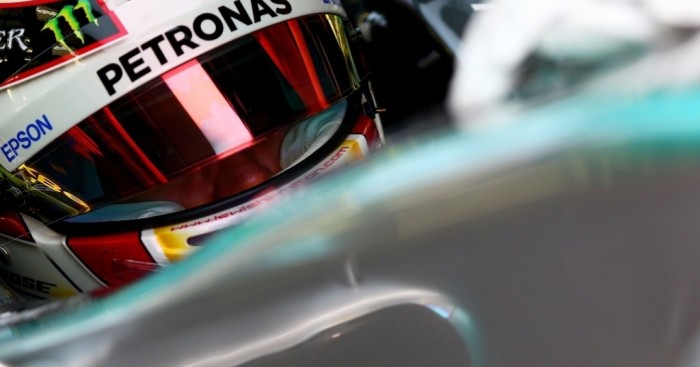 Lewis Hamilton set the pace in Friday's second practice in Spain, 0.408s up on Sebastian Vettel while Nico Rosberg was third…

Mercedes:
Lewis Hamilton: "It’s been a fairly decent day – mainly working on setup, tweaking the balance bit by bit. It’s often hard to get a good comparison between the sessions with the track and wind conditions changing. The wind was quite strong at times today and really inconsistent around the lap. The car is quite affected by that and it was pretty hot out there in the afternoon too, so I think maybe the temperatures also had an effect on lap times. The priority was understanding the tyres and how they wear because, ultimately, the race is the most important part of the weekend. We’ve not analysed the times yet but our pace felt pretty strong."

Nico Rosberg: "It’s great to be back in Europe and back to this track, where we did so many laps in the winter tests. I worked a lot on race pace in the afternoon and was happy with my long run, where we seemed to be quicker than the Ferraris. On one lap I still have a bit of work to do to find some more speed, so I’ll be working hard with the team tonight to find out where I can improve. On track it was quite a difficult day for everyone, I think. The conditions were really strange and the track was very poor. I don’t know really why but hopefully it will be more predictable for qualifying and the race."

Ferrari:
Sebastian Vettel: "I think it’s quite straightforward that the Medium are the faster tires, but today it was a bit slippery for all the cars. Grip seems to be very low, nothing abnormal as we’ve seen it across many years now. When we come from the winter usually in summer the track is quite a bit slower. It always helps when there are cars around and I think everybody covered quite a lot of laps today: of course on Sunday it will improve, but the general conditions will remain the same. They say it is going to be a bit cooler on Sunday and maybe that will help. I think we can improve the cars, but the gap with Mercedes is still there. It was not the best lap today, but I believe that in these conditions it is difficult for everybody. The difference between the two tires compound is quite big on a lap for us, while on the long run it is a lot smaller, but then when you slide so much you can’t really extract the performance out of the tires. Today everyone was sliding a lot, so it’s not entirely fair to judge the new pieces on the car. But most important, there’s nothing wrong with them: they’re working as expected so we can hopefully build into that."

Kimi Raikkonen: "It was quite a strange day. The position and laptimes were not too bad, but I was not completely happy with the handling of the car. I don’t know if it was caused by the wind or by the conditions of the track, but I have been struggling all day. We did not see anything bad with the upgrades we brought here. It’s just the feeling that it’s not completely right, as if the car was sliding. I feel there’s a lot to improve and to gain, in the evening we’ll look more into details and see what we can do for the rest of the weekend."

Red Bull:
Daniil Kvyat: "We had a good run in FP2 and there is a lot of data for the team to analyse to find improvements. We have some upgrades here and we’ve been looking closely at how they work. We’ll try to extract the maximum out of the car so we can make the most out of qualifying tomorrow."

Daniel Ricciardo: "We expected we would be limited with mileage today, and we also knew that we would have to use the fourth engine for FP2. It would’ve been nice to get some more laps in but we did enough to give us plenty of data to look at. Dany had a cleaner session and we’ll also look at his data and try to learn a few things for tomorrow. There’s a lot of potential with the upgrades and tomorrow's qualifying is what counts."