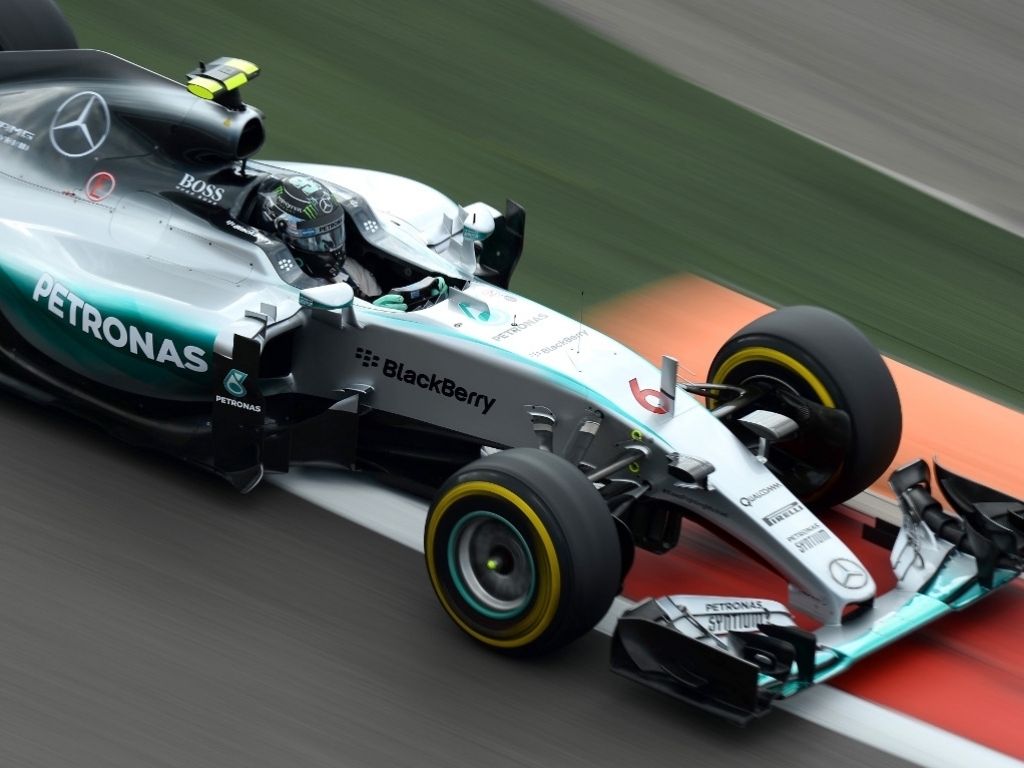 Nico Rosberg got the better of Lewis Hamilton in FP2 while the Red Bulls were faster than the Ferraris.

Mercedes
Nico Rosberg: “It´s very exciting to race here in Mexico for the first time. The track reminds me very much of my youth. It feels like a kart circuit with a lot of very tight corners and the two stadiums are really spectacular with all the fans. We brought the same rear wing here as we would use in Monaco, with maximum downforce. But, because of the altitude here in Mexico City, we are also very quick on the straights which feels very strange. I was happy with the outcome today. It seems that we are quick and I was able to try a lot of different things with the car. I’m really enjoying it here and I can’t wait for qualifying and the race.”

Lewis Hamilton: “It was really challenging out there today – for everyone I think – but also a lot of fun. The track feels more like a go kart track in the slow areas! It’s crazy how slippery it is. Because we’re so high up in terms of altitude, there’s even less grip than in Monza, so the car was just sliding around. Of course, this is also because the track is new, so there is no rubber on it yet. But it’s getting better and better the more we drive. It’s great to see how many people came out today. It has been really full out in the stands – especially for a Friday – which is really good to see!”

Red Bull
Daniil Kvyat: “The track is very cool, it’s a lot of fun and there are plenty of technical sections where you need to prepare for the corners and think twice before you really get into it. It was a good crowd, we saw lots of fans and passion today and the stadium section looks cool, it’s very nice to see. Conditions were changing quite a lot today and as you expect with a new track, it was evolving a lot too. How things are right now, we look very competitive, so hopefully we can keep it up tomorrow. Nevertheless I don’t think it’s going to be easy because usually on Saturday the silver cars and the other guys find some more performance, but we’ll have to wait and see. Fingers crossed we’ll be able to maintain this nice level of performance and hopefully we can spice things up tomorrow. That would be really cool.”

Daniel Ricciardo: “I feel the track has got a lot of potential, but it’s so slippery out there. Even in the afternoon when it was quite dry, the high-speed stuff was still very slippery. But it’s a brand new track and once the grip is in, it’ll be a lot of fun. The track is unique and I think they have done a really good job with it. The facilities are amazing as well. It’s definitely really cool to have such big support here – there were so many people in the grandstands. Not a bad Friday for us as a team with pretty much all corners at the track suiting us. On the one straight we lose all our advantage, but all these tight, twisty corners and the fast flowing esses in the middle worked to our advantage. We look more competitive than we thought we would be, but let’s see what happens tomorrow.”

Ferrari
Sebastian Vettel: “It was an interesting day, the circuit was very slippery. It has very low grip, I think everybody struggled to keep the car on the track. Surprisingly the speed was low overall, I was hoping that the fast corners were a bit quicker. Hopefully with more rubber on the track it should get quite a bit better. It was amazing to see how many spectators there were already on Friday, and it’s also kind of unique to enter a sort of stadium when you look left and right and see this many people are there… And then the big grandstands, you drive through them! It’s a bit like Singapore, just bigger, and there is a great feeling. I think we can be reasonably happy with how the day went, but I’m sure we can still improve. Unfortunately the rain stopped our long run in the end, but so everyone was affected the same way. Nevertheless I am sure we can do improvements for tomorrow and we should be in a good place.”

Kimi Raikkonen: “It was quite a tricky day, the layout of the track is ok but the new surface was very slippery. The cars were sliding around and sometimes you felt more like being in rallying than in Formula One! The tires are a bit on the conservative side but it’s the same for everybody. We knew since the beginning that because of the altitude and the thin air, the speeds would have been high, I think everybody was running full downforce; but I would prefer to have the usual amount of downforce. Obviously, as we do more and more laps, track conditions will improve and the surface will grip out, but I’m sure it will still be more tricky than other races. In the second session during the long run it was raining a bit and I didn’t want to risk anything, so I took it easy every time there were drops coming down. Tomorrow we still have time to work on the car for a better set up and see how it goes. We’ll try to make the best out of it.”