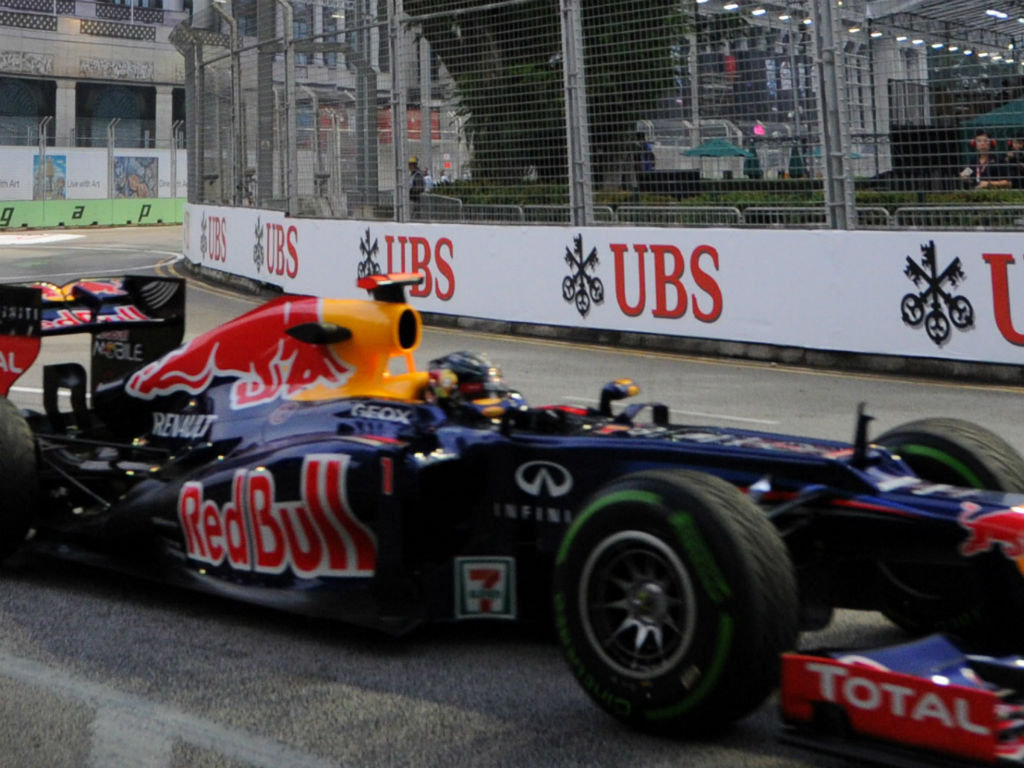 Sebastian Vettel was the man to beat in Singapore, edging Jenson Button by 0.3s while Fernando Alonso was third…

Sebastian Vettel was the man to beat in Singapore, edging Jenson Button by 0.3s while Fernando Alonso was third…

Red Bull:
Sebastian Vettel: “This is a tough circuit for drivers and cars. Overall we can be happy with today, but let’s see what we do tomorrow, it’s still Friday and today’s results are not so conclusive as some drivers got stuck in traffic etc. Most important is that the car seemed to work on either tyre, so we go from there. The kerbs have been changed this year, which is an improvement.”

Mark Webber: “The second session was useful today. I had a good feeling with the car and we seem to be more competitive here. We need to keep chipping away, also because the track will change a bit by tomorrow, so we need to be ready for that, but a solid start. I think we can be strong on Sunday, we need to execute a clean Saturday first, but so far so good.”

McLaren:
Jenson Button: “I don’t feel like I’ve found my flow yet – the track surface wasn’t very grippy in either session because of the morning’s rain. I’m not entirely happy with the balance either – not everything we tried changing today was successful – but we’ve still got a few ideas for tomorrow and that’s a positive. There’s still a lot of work to do – but, if we can fine-tune the balance, we should be competitive.”

Lewis Hamilton: “Our car has quite a nice balance but we still need to make some further set-up changes. It’s tough in these temperatures, especially on the long runs, but to be honest I think everyone’s struggling a bit too. In FP2, I ran a bit wide at the final corner on my fastest lap and probably lost about half a second. Still, it’s great to be able to throw the car around on a high-downforce circuit. My race pace didn’t feel great from inside the cockpit, but my engineers tell me it was quite promising. The track should also rubber-in by tomorrow, so tyre degradation should be less of an issue. We’re in the top five, but it’ll be a very tight battle for pole position tomorrow. We’re looking at set-up and balance to improve our long-run pace, but today’s performance isn’t a bad place from which to start.”

Ferrari:
Fernando Alonso: “We tried various new components on the car: some seem to be positive, others less so, but maybe in the case of the latter, we need to spend a bit more time for them to be developed as well as possible. Overall, I would say today was positive, even if the first impression is that we are not as competitive as we were in Monza, two weeks ago. We still lack a bit of performance on tracks like this one, where you need maximum aerodynamic downforce. From what we saw today, there’s a significant difference between the two types of tyre, but we will have to wait until tomorrow to get a clear picture of the situation on this front. Maybe today’s difference has been somewhat exaggerated by the evolution of the track surface. Testing the tyres over a long distance is very complicated on a track like this, because of the traffic, therefore it’s difficult to make a direct comparison to our main competitors. I am reasonably sure that, on Sunday, we will see rather significant degradation and it will be important to manage that as well as possible.”

Felipe Massa: “It wasn’t an easy day for me. The car wasn’t right all day and I also suffered particularly badly with tyre degradation in both sessions. At the end of the second session, we found something that wasn’t working properly, but that doesn’t explain all my problems. We must find out what happened so we can fix it for the rest of the weekend. We have reasonably clear ideas about the direction to go in when it comes to set-up: one thing’s certain, there’s a lot of work to do.”

Force India:
Paul di Resta: “It’s been a positive Friday overall and I think we are looking competitive here. The rain at the start of the first session didn’t really have an impact on us and we still had plenty of time to get through the programme. I think in terms of race preparation we can be happy because we focussed on long runs and have lots of information going into tomorrow.”

Nico Hulkenberg: “I think you always need time to get up to speed on any street circuit so it was useful to have some trouble-free sessions and get the laps under my belt. The balance we have with the car is already looking good, but there’s always room to improve things overnight. So I think we’re in decent shape and the data collected should leave us well prepared for Sunday’s race.”