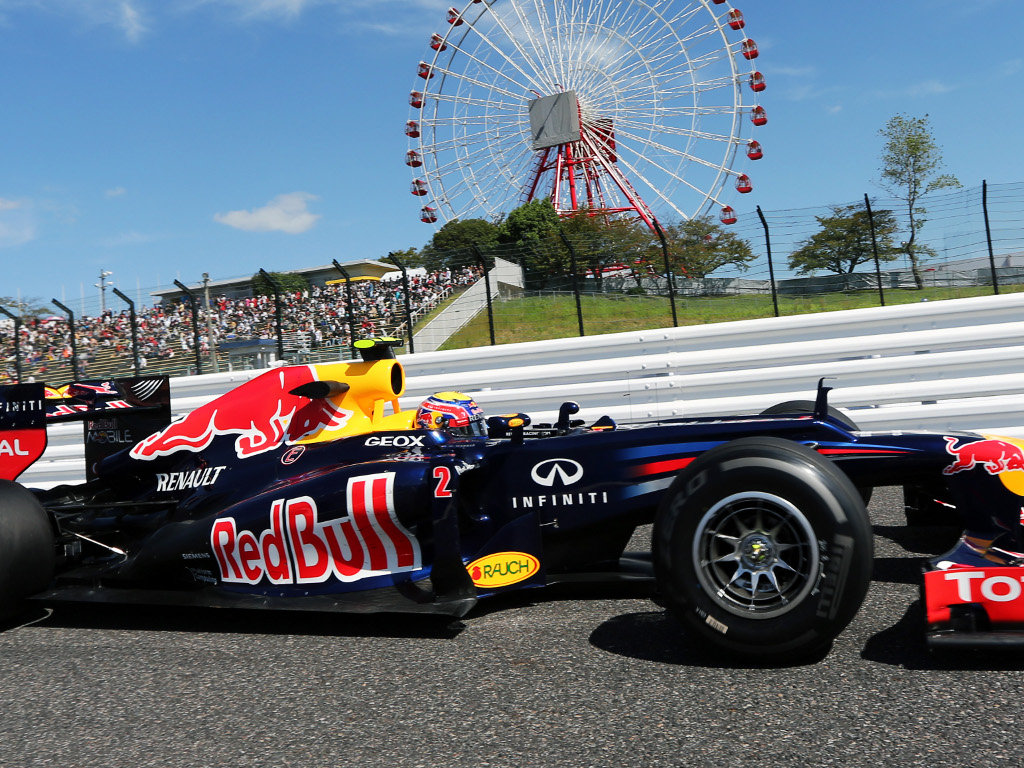 Mark Webber was the driver to beat at Suzuka on Friday, setting the pace ahead of Lewis Hamilton and Sebastian Vettel…

Mark Webber was the driver to beat at Suzuka on Friday, setting the pace ahead of Lewis Hamilton and Sebastian Vettel…

Red Bull:
Mark Webber: “It was a nice change to get some good weather; it’s been the first dry weekend for a while. We have plenty to go through this evening, it was a smooth one for us today and we completed all the runs we wanted to. It’s a challenging venue in terms of balance here, but the car ran well and we tested both tyres. We have areas where we can improve, mostly with the balance, so we have some work to do. Suzuka is a great track that’s remained untouched for a long time, it’s a classic.”

Sebastian Vettel: “The car’s performing, but there are still some things we can improve. It was a bit nervous this morning, better this afternoon, but we need to make a step overnight. I think tomorrow will be very, very close, so everything we can get out of the car will matter. This circuit is so special; you have the people everywhere who are so passionate about F1 – almost crazy in a good way – and the track is fantastic, you have such nice high speed corners one after the other. It’s so enjoyable, you don’t want to come into the pits, but want to stay out on track.”

McLaren:
Lewis Hamilton: “I have the coolest job! Suzuka is such a phenomenal circuit! The first lap out of the pits felt great. Just driving through the first couple of corners and feeling the acceleration, it takes a few laps to get warmed up, but you keep getting faster and faster as you push the limits. But you need to be careful. At Spoon we saw a few people making mistakes today. If you put a wheel on the dirt, it’s very easy to lose the car. As always, we’ll be fine-tuning the car tonight ahead of tomorrow’s sessions, but it looks very close between ourselves and Red Bull. I feel comfortable with our car – it’s the best that it’s ever been around here – and I think I could have matched Mark’s [Webber] fastest time with an optimal lap. It’s going to be very close in qualifying tomorrow.”

Jenson Button: “I love Japan. This is a crazy race for me – the fans are fantastic, they’re true supporters of all the drivers, and they get so excited about the sport. Also, there’s such a flow about this circuit. It’s important to find the right gear ratios though, because you’re up and down the gearbox all the time. I didn’t do too many laps in FP2: the balance wasn’t quite right and we knew we couldn’t go back on the changes we’d made until after the session, so there wasn’t any point doing too much running. Still, we know how to dial the car in for FP3 tomorrow, and that’s the important thing. The car felt good this morning, so we’ll go back to something similar with just a few detail changes. Overall, the car is working well here. Qualifying will be very competitive, but I think we’ll be up there.”

Force India:
Nico Hulkenberg: “Quite a smooth Friday for me and nice to have two dry sessions with consistent weather. We went through the programme and did all the things we wanted to with no issues. I’m quite happy with the car on low fuel, but I think we still have some work to do to improve our high fuel performance. We took our usual approach with the tyres and did long runs on the hard and soft compounds, so we have lots of information to help us for the race.”

Paul di Resta: “The morning session was straightforward and the balance was good straight after lunch with the changes we had made to the car. Unfortunately I made a mistake quite early on and was probably a bit too ambitious. I found myself with my two right side wheels on the grass and lost grip on the loose dirt. It’s a shame it had to happen so early in the session and it creates extra work for the guys tonight. You have to be on the edge to feel what the car is doing and sometimes these things happen, but hopefully it won’t cost us too much for the rest of the weekend.”

Ferrari:
Fernando Alonso: “This was a reasonably good day. I like driving at Suzuka because it’s a very nice track which I love coming to race at and which, with its characteristics and its fast Esses, reminds me a lot of Spa. Overall, the feeling is good and I don’t think the high temperatures can constitute a problem for the tyres. We have done a lot of races in hot conditions, and not that long ago either, given that Singapore was only a fortnight ago and just like we did there, we will have to learn to manage them, which indeed will be the case for everyone. It’s hard to say if we can be as competitive here as in Silverstone: that was three months ago and we don’t know exactly how our rivals’ cars have evolved compared to how much progress we have made. We will have to wait until tomorrow, because usually on Saturday the pack gets jumbled up. As for the small updates we have brought here, there’s not much to say and we will have to spend more time looking at their behaviour.”

Felipe Massa: “Generally a positive day, during which we managed to get through everything on the programme. As usual on Friday, we tried both Pirelli compounds. It’s hard to say precisely where we are: what is certain is that many of our rivals seem to be competitive, but as usual, we must wait until tomorrow to get a clearer picture of the situation. In the afternoon, we did a fairly long run at the end of which we saw quite high tyre degradation. It won’t be easy to decide what will be the best strategy. I’d describe the balance of the car as average: even if we didn’t match the pace of the others, there is still a lot we can do to improve and we must also take into account the fact that the track changes a lot from one day to the next. I hope that tomorrow the results will come, because we have the potential to do well.”