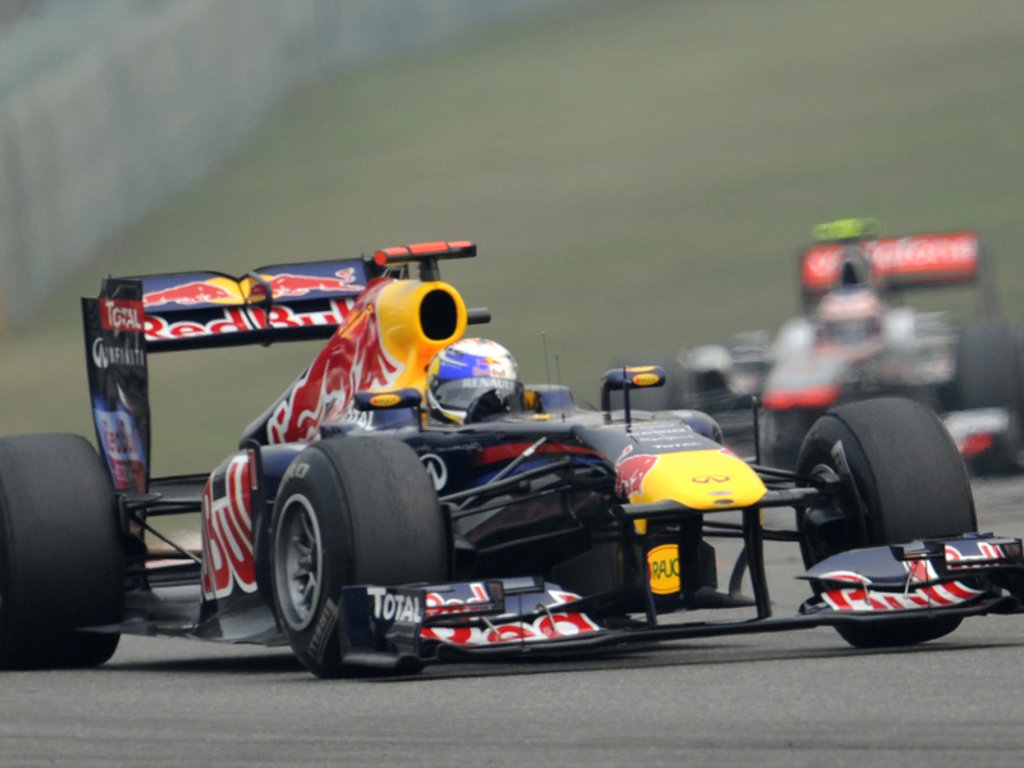 Sebastian Vettel was quickest in Friday’s practice in China, finishing ahead of the two McLarens and the two Mercs…

Sebastian Vettel was quickest in Friday’s practice in China, finishing ahead of the two McLarens and the two Mercs…

Red Bull:
Sebastian Vettel: “We had a good day today, but it’s only Friday and so it’s early in the race weekend. We found a good rhythm and we’re happy with the car. There’s still a lot to do and I think it will be tight tomorrow and on Sunday, so we’ll look where we can improve. But, today we had no big issues.”

Mark Webber: “I didn’t have the best P2, particularly on the short run with the new tyres, which is why my time is down a little, but the long run on the option tyre was good. We’ll look at KERS tonight – we’d like to run it this weekend of course. Generally it was a good Friday, we learned a lot and the car was reliable.”

McLaren:
Lewis Hamilton: “It’s been a busy day today. The car wasn’t too bad at the end of this afternoon’s session – and I was able to get a decent laptime despite not feeling totally comfortable with the car. We’ve been struggling a little bit with the set-up. It doesn’t feel like the car’s performing in all the areas we expected: we need to see whether the issue with the car’s balance is down to the upgrade or just an unsatisfactory set-up. It does feel like we’ve found some further improvements since Malaysia, and we’ll spend this evening looking at what elements of the new package we choose to take forward into the rest of the weekend.”

Jenson Button: “This morning was reasonably good and the car was working well – it’s a good car to drive. For the afternoon, we tried a few things and didn’t really improve the balance of the car, so we’re going to look at why the changes didn’t really give us the improvement we expected. The car felt reasonably strong on the Prime tyre but less so on the Option. So it’s not been a perfect afternoon but we have a lot of information on the changes we made, so we can hopefully work on improving the set-up tomorrow. It’s not as hot as it was in Malaysia, so I don’t think the tyres will be as much of an issue to look after as they were in Malaysia. If we sort out the balance tomorrow, we’ll be closer to Red Bull.”

Mercedes GP:
Nico Rosberg: “Today we made a small step forward, particularly this morning where we learnt some positive things with the car compared to Malaysia. The balance was quite good today, and I really enjoy driving this track. We don’t really know where we are right now, and of course what everyone was doing, but today’s running gives me hope for an improved performance tomorrow.”

Michael Schumacher: “We’ve had a good working day here during the first outings on the Shanghai track. We have changed our working approach this weekend, and I think this has paid off. We concentrated mainly on high fuel loads, and it seems we can find the set-up better than starting from low fuel. The long runs were good in my view which is clearly an improvement on the first two races. There is room for further improvement so I look forward to understanding what we can achieve in qualifying.”

Ferrari:
Felipe Massa: “As was already the case in the first two races of the season, today we witnessed a very fast Red Bull. I am reasonably pleased with the handling of the car over a long run, which produced some interesting results. I am hoping for a better qualifying, but we know it will be very difficult, while from what we have seen today, I think the situation in the race could be similar to what we saw in Malaysia. Fernando used some new parts but it is too soon to say if they really represent progress: unfortunately, he had problems and did not manage to do as much as was scheduled. The soft tyres seem much better than the hards: not only do they give more grip, which is normal, but also the degradation is not as high as we have seen before. Over the years, I find it even more enjoyable coming here to Shanghai: at the start it was all a bit chaotic, but now the situation has improved and, as is the case in my home country, Brazil a lot of effort is going into making progress in many areas and that can be clearly seen.”

Fernando Alonso: “I lost valuable time because of a hydraulic problem, in both sessions, but most of all in the second one. Unfortunately, I did not manage to do any long run testing to get an idea of the tyre degradation, but fortunately, Felipe managed to do that on both types, so at least we have a good basis to start from. As for the new aerodynamic components, it is too early to say if they really produce an advantage. The engineers will now have to study the data carefully, before drawing any definite conclusions as to whether or not we are moving in the right direction in terms of development. From the little I could see, there are no problems – or at least they are very slight – in terms of warm up on the hard tyres, which could be an improvement for managing the tyres in qualifying. I don’t expect much to change from what we saw in Malaysia and Australia: McLaren and especially Red Bull are quicker than us and are favourites. At the moment we are not capable of fighting for the win, but that doesn’t mean we won’t be trying.”