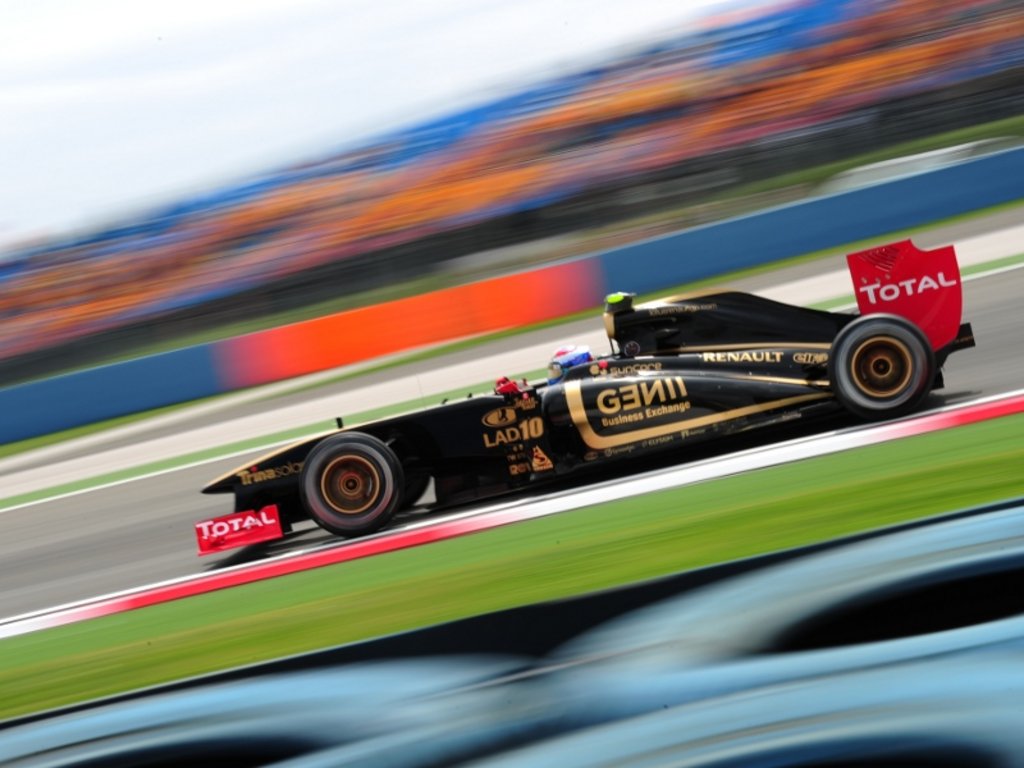 Renault:
Vitaly Petrov: “It was a bit difficult today with the weather conditions. We didn’t use inter tyres in the first session which was a pity. We wanted to save tyres, which is why we only had 10 laps. In P2 we knew it would stay dry. We need to be happy with today. As expected, we achieved quicker lap times and there’s still some more in the car. Judging by our performance in P2, I think there are encouraging signs ahead for the rest of the weekend.”

Nick Heidfeld: “It was good to finally get an experience of the wet conditions by using the extreme wet tyres, because I haven’t used them before in testing properly. That went quite well I have to say. We didn’t want to destroy them – as we hadn’t tested them before, we didn’t know how long they would survive and the forecast was still not clear for Saturday and Sunday. Unfortunately we didn’t get into a position to be able to drive the intermediates. Then, as the second session was completely dry we were able to completely focus on our programme, which was to get a long run in towards the end, whilst having a high fuel load.”

Force India:
Paul di Resta: “The wet weather session this morning made it difficult to learn much about the new front wing, but it was important for me to get a feel for the track and the wet weather tyres. For the afternoon, the priority was to try and understand the hard and soft tyres: we did two runs on the hard and two runs on the soft, which has given us lots of data to analyse this evening as we plan our approach for tomorrow. Overall I think we’ve made a good start and the car feels relatively straightforward. There are always things to improve, but I’m happy with my day.”

Adrian Sutil: “We had the wing to try on my car this afternoon, which was quite interesting, but now we have to look at the data and try to really understand it. At the moment it’s too early to say that much. I tried both the hard and the soft tyres and did a long run on each, so I feel quite well prepared. I think the hard tyre was the best and most consistent today, but that could easily change as the track evolves. For the general balance of the car, we will work on trying to improve in the final sector and dial out some of the understeer. However, the car felt very well balanced in the high-speed corners.”

Sauber:
Sergio Perez: “I have completed the programme which had been planned for me. In the morning I didn’t put in a proper lap time due to some aero testing. After the second session I’m quite positive for tomorrow. We have to draw the right conclusions tonight, and I believe we can be good in qualifying. I absolutely enjoy every lap going through turn eight. For me it is the first time in an F1 car here and it is sensational.”

Kamui Kobayashi: “In the morning I did some testing with mechanical parts, but we have been quite unfortunate with the weather conditions for this. It is really difficult to judge from the wet testing. Nevertheless it was a good experience to use the wet tyres for an entire session. I think Pirelli has done a good job, I don’t see degradation problems,and the tyres should be ok for a race. In the second session we did our normal programme, despite an hydraulic problem which we had to solve. But again I find it difficult to judge how good the car really is here, so we need to look into the data tonight.”

Toro Rosso:
Sebastien Buemi: “This morning’s session went well and we managed to complete quite a few laps on the extremes, although we did not use the intermediates, as the conditions never seemed good enough. At least we have a good read of how the extremes behave, so if it rains on Sunday we will know what to do. Apart, from that, it was a productive day for us in general, trying a few different set-up changes and I am quite happy with the work we completed today. But of course, this is only Friday, so we need to study the data carefully and hopefully we can maintain the good performance level we have seen in the first three races. From the tyre comparison I did, the difference between the two compounds seems smaller than usual, but it is still too early to draw any definite conclusion.”

Jaime Alguersuari: “I think we have a lot of work to do to prepare for tomorrow, because I did not have a good feel for the car today, so we need to concentrate on finding a better set-up for the rest of the weekend. We will look at the data to analyse what we need to do, although I have a good idea where the problem lies and I am sure the engineers will know what to do. I ran a different set-up to my team-mate today, which at least means we have more data to study. I did a tyre compare and the changes made to the hard tyre seem good, as it performed consistently and also I did not find such a big difference between the Prime and Option as in previous races. It seems the balance between the two compounds has improved.”