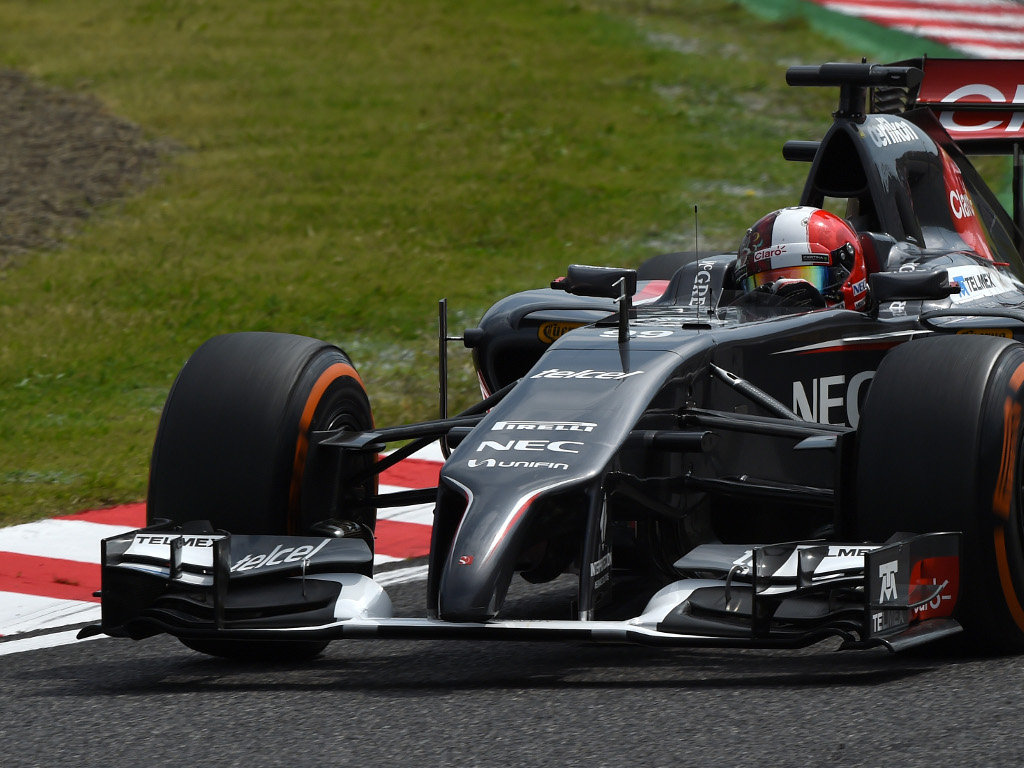 Sauber’s troubles continued as they again joined Caterham and Marussia at the back of the timesheets, this time in Japan…

Sauber:
Adrian Sutil: “In FP1 we had problems finding a good balance for the car. The hard tyres didn’t work as we had hoped. There was very little grip, which makes it difficult to set a decent lap time. For FP2 we made some changes to the set-up of the car, which improved the situation with the hard tyres, but then I struggeled with the medium compound. Overall the balance of the car is just not satisfactory. Our main problems are coming from the power unit, which is disappointing. Unfortunately I don’t see how we can change that for tomorrow.”

Esteban Gutierrez: “Unfortunately, I lost the car in the second practice session in turn 13. With the speed you get there it was difficult to avoid an impact. I am really sorry for the team, and I am sure we will recover for qualifying. In the first practice session we were struggling with the set-up of the car. I think we found a good compromise in the second session, and we will analyse the collected data to get everything ready for tomorrow.”

Caterham:
Marcus Ericsson: “I’m happy with today. This morning in FP1 we went through the programme as planned and we tried the new front wing during the last run on used tyres – it felt good and we will definitely get some useful information. We went back to the old front wing in FP2 and it was a decent session. We completed plenty of laps and the car feels nice to drive round here. We have something good to build on during the rest of the weekend. Also, if we look at the gap to the guys in front, I think we are better than we’ve been before, which is positive. I have a lot of good memories from this track: I’ve been on pole and won here in the rain and in the dry and always been quick here back in 2009, so it’s great to be back – the track is great to drive in an F3 but amazing to drive in an F1!”

Kamui Kobayashi: “It hasn’t been the best of ways to start my home Grand Prix: after sitting out in FP1, I suddenly lost the rear-left during my first run and that was the end of the day for me as I crashed into the barrier. It’s a shame, but at least we have tomorrow – it’s not much time but I will need to use FP3 to feel the car and luckily this is my home race and a track I know very well. Let’s see what happens tomorrow, hopefully it will be better than today.”

Marussia:
Jules Bianchi: “We lost a bit of time this morning because of a reliability issue, but aside from that we have had a reasonably positive start to our weekend. We have made some good progress with the car already, so I think we can improve a little more still, ahead of the race. I think there are some unknowns about the weekend yet, given the weather situation, but fingers crossed we can have a good race here. It’s nice to be back here at Suzuka. It’s such a great circuit.”

Max Chilton: “Overall, it’s been a good day for me. We improved the car with each run and by the end of the day we had a good compromise balance, with more time tomorrow to hone the car further. So I’m reasonably positive for the rest of the weekend. The main unknown is of course what the weather will bring, but we will continue with our planned programme and hope for the best.”