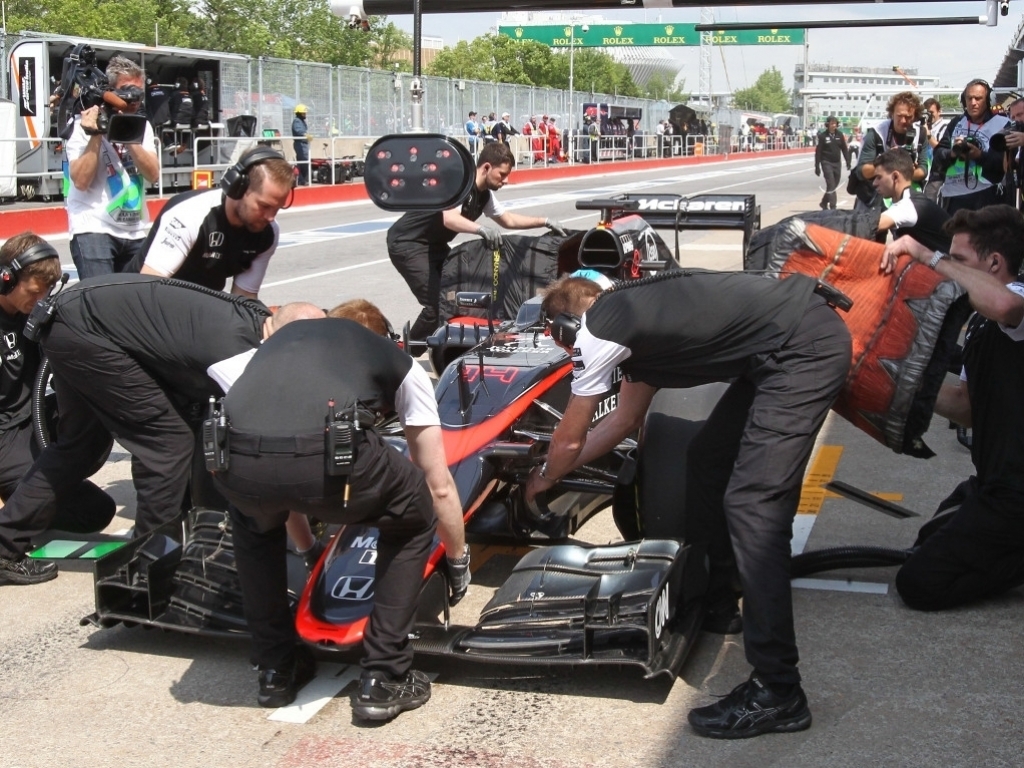 It was a tough old day for Toro Rosso and McLaren as they joined Manor at the back of the pack.

Sauber
Marcus Ericsson: "In the first session we tried a set-up on the car which was not working as we expected it would – with both tyre compounds, the soft and supersofts. Nevertheless, we were able to collect more data. In the afternoon, we returned to another set-up which worked better. I am satisfied with this first day of practice in Montreal. Now we are looking forward to qualifying."

Felipe Nasr: "It was a positive day. I was not able to run many laps on a track I did not know before. It was important to cover a good amount of mileage before it started to rain. In the morning everything went according to plan. For the second free practice we made some set-up adjustments, which I felt were positive. We have some minor issues with the brakes, which I am confident we will be able to fix for tomorrow."

McLaren
Fernando Alonso: "The rain didn’t affect too much our FP2 programme today, as we could go through most of it in the first part of the session. Overall, then, it’s been an interesting Friday. We tried several things in FP1, all of which seemed to work as we’d expected. So far I am happy with the balance of the car, and with the power delivered here, but the features of this track don’t suit our package too well. We’re still several tenths behind to where we want to be. Position-wise, we need to take a step forward, but that’s going to be difficult to accomplish here. In tomorrow’s qualifying session we therefore expect to end up somewhere in the midfield."

Jenson Button: "From this morning’s session we immediately knew we’d got a lot of work to do on set-up. However, now, I think we know exactly what we have to do, and it’s already been put in motion. There’s a lot of work required, but hopefully we’ll see the results of that tomorrow; I think we will. There was a problem with the gearbox in FP1 – I couldn’t get out of second gear, maybe I didn’t double-clutch enough when I when I went into third gear – but it was solved pretty rapidly and I was back out in the second half of the session. I think we’re all pretty good at understanding what the weather is going to do here over the weekend. When the rain started in this afternoon’s session there was no need to go out – it was extremely wet out there. Everyone up and down the paddock has got new parts, and, if you crash, that’s it; that’s your upgrade gone. It’s not forecast to rain on Saturday or Sunday so we decided to end the session there and then. I think qualifying in the top 10 tomorrow may be tricky, but you never know; we’ll see."

Toro Rosso
Carlos Sainz: "It’s been a difficult day for us. This morning in FP1 we had some electronic issues, so we were slow and didn’t complete as many laps as we wanted to. It’s a bit annoying, because it’s very important for us to get as much mileage as possible here as this is a completely new track for me. In FP2 we didn’t have any issues, but it was a bit of a rushed session because we were expecting the rain to come. I felt that the car was improving lap after lap, but just as we managed to get to a decent level the rain arrived. The lack of running meant it wasn’t an ideal first day for a rookie especially on a difficult track like this one but hopefully we can use tomorrow’s FP3 to prepare ourselves better for qualifying."

Max Verstappen: "It was a hard day for us today. FP1 wasn’t too bad and I think it was a good result to end up in tenth position. In between sessions we made some changes to the car for this afternoon’s FP2 but that didn’t really work out. We therefore have some work to do tonight but at least we know in what direction to go. It will be a difficult weekend but I’m up for the challenge."

Manor
Roberto Merhi: "I’ve really enjoyed driving this circuit today, so it’s a shame that we have lost so much time to the wet weather. In the dry periods we were able to push on with the programme though and I’m really pleased with the way things were progressing. It’s clearly a challenging track to master, as we have seen already, but I seem to have found a good rhythm. I’m looking forward to dry conditions again tomorrow to pick up where I left off before the rain came."

Will Stevens: "It’s been difficult to get into a good rhythm today, with the wet weather this afternoon and also losing a bit of time during the dry window while we addressed a small problem. I worked through a lot of test items this morning, which was interesting and we have some good data to pore over. I really like the circuit and I’m looking forward to resuming the plan in FP3 tomorrow. We’ll undoubtedly have a lot of catch-up work to do in that session as we continue to try to optimise the car in the dry."