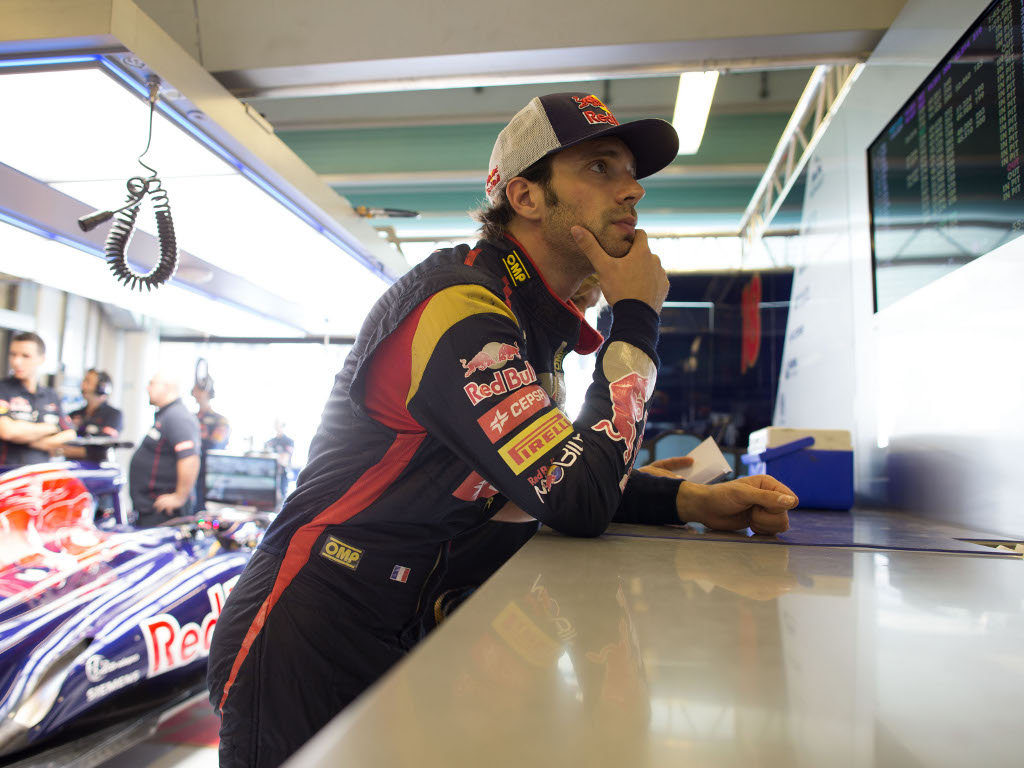 Toro Rosso failed to impress in practice for the Abu Dhabi Grand Prix weekend, slowest overall in practice with Caterham and Marussia…

Toro Rosso failed to impress in practice for the Abu Dhabi Grand Prix weekend, slowest overall in practice with Caterham and Marussia…

Toro Rosso:
Daniel Ricciardo: “Our first day in Abu Dhabi was not the best, as we struggled to find the right balance on the car. Leaving lap times aside, it was quite difficult to understand exactly what was going on with the car underneath us. That makes life harder, as it robs you of confidence. However, we did make some progress between the morning and the afternoon, but there is still much more to do. I think we understand what we need to achieve, so some effective work this evening with the engineers figuring it out will see us do much better tomorrow. The Soft tyre seemed to behave much better here than in India, which is what you’d expect, even if I didn’t do so many laps on it with a high fuel load. I’ve always enjoyed the experience of driving here, as it goes from twilight to dark so quickly, which involves a helmet swap during the session, which is fun.”

Jean-Eric Vergne: “If we ignore the lap times, I think this was a reasonably productive day. Our overall performance is good and I felt the car was working well. It’s true we need to find a bit more lap time for tomorrow, but I am fairly confident. We just need to work well overnight to iron out the small details that were not quite right today and I believe we can then run competitively. As for the tyres, I did a long run on the Soft tyre and it definitely works much better and lasts longer with better degradation than we saw in India a few days ago. So, everyone should be able to make better use of it in the race on Sunday. This is an enjoyable track to drive and the setting, as well as the timing of the sessions is truly unique.”

Caterham:
Giedo van der Garde: “”I was back in the car for FP2 and it felt pretty good right from the first run. The rears were locking a bit too much and the car wasn’t planted in the high speeds but overall it was ok. I did a couple of runs on the mediums to begin with, then onto the softs for the performance run and I have to say the car felt pretty generally stable. We did have a bit of rear locking under braking and I would have like a bit more front end, but we made a few changes for the run on the softs and it was feeling good – my quickest lap was ok but I know there’s more to come for quali, especially if we can improve the front end. On the long run I stayed on the options. The front tyres were cooling a lot which created understeer, but by the end of the run they were starting to come back. The rears were very consistent throughout the run so that gives us some interesting strategy options for the race. I haven’t tried the primes on a long run yet but Charles has so we’ll see what his data says tonight and then we can progress tomorrow.”

Charles Pic: “FP1 was all about trying to turn down how strong the front of the car was, particularly on turn-in to the corners. The aero balance was pretty good but the car was too pointy for me on each run and even though we improved the rear I didn’t have a balance I was really happy with for the whole session. In FP2 the temperatures were obviously lower than FP1 and the balance wasn’t as good as it had been in FP1. I was also struggling to get temperature into the front tyres so we had a look at that on the performance run as the conditions are obviously much more like they will be in quali in FP2. On the run on options they came up to temperature much faster, the fronts were actually easy to warm up but the balance overall was still a bit on the understeer side, especially on entry and mid-corner. We added more front wing for the long run but I still had issues with the front warm up. Overall the car was understeering and I had some issues with braking stability so we’ll look at that in detail tonight and aim to fix it for tomorrow.”

Marussia:
Jules Bianchi: “I’m quite pleased with how today has gone for me. We seemed strong from the start with the new aero development we had this morning and we have done some more good work with the new suspension components. This afternoon the conditions were pretty much as we expect them to be for qualy and the race – the same light and temperatures – so it is quite good to find ourselves where we are in terms of the competition. I think it will be very close so we are taking nothing for granted, just pushing all the way for the best result on Sunday.”

Max Chilton: “A shorter day for me having made way for Rodolfo’s planned Free Practice session this morning. I’ve driven here before so I am pretty familiar with the track and the acclimatisation was short. Just as I was getting into my run I felt something wrong with my car. It seems that I had a damaged brake duct, but we’re not quite sure how it happened. The guys worked well to replace the duct and turn the car around and I was pleased to get quite a few laps in after that. We are finding our way with the car balance a little but now is a good time to do that as these are the conditions we expect in qualifying and the race. Not a bad start but quite a lot of thinking to do in preparation for FP3.”