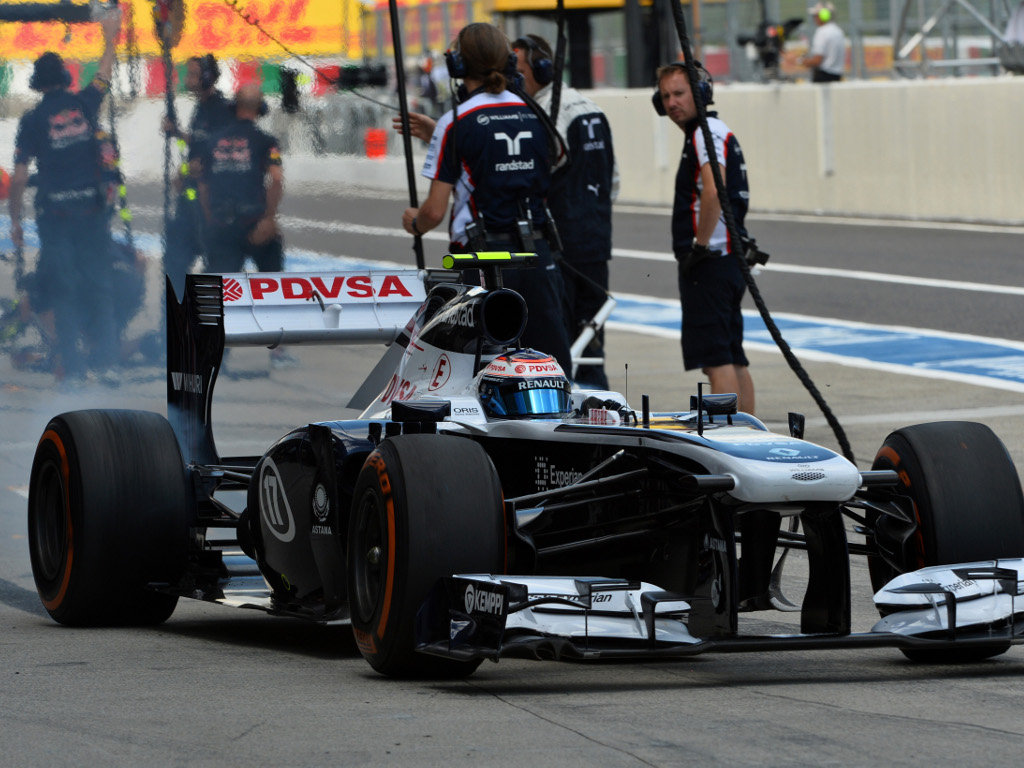 Williams:
Valtteri Bottas: ” There are still some balance issues with the car and the strong winds today made it feel more inconsistent. We are struggling to get the most out of the soft tyres when the track conditions are improving, and relative to the other cars I would say that our pace is similar to where we were in Korea. Nevertheless I managed to get a good number of laps in today, more than any other driver, so we have a lot of data available to us to try and improve the car’s performance and find a few extra tenths ahead of qualifying.”

Pastor Maldonado: “It was a frustrating day today as I didn’t get the amount of time on track that I would have liked. My FP1 session ended early after a problem with my left-rear tyre, and at the beginning of FP2 I was struggling for grip and lost the back end of the car and went off the circuit which ended my running. Tomorrow is another day though and FP3 will give us a chance to improve the set-up based on what we learnt today and get some low fuel running in to optimise our car for qualifying, which will be important as overtaking here can be difficult.”

Caterham:
Charles Pic: “I was back in the car for FP2 and we went straight to work on a set of hard tyres at the start of the session. At first the car felt a bit too sharp on turn-in and in the high speed section there was a bit too much understeer, so we added a bit of front wing for the next run. That improved the balance a little but it still wasn’t great. It was the same on the options but for the long run we changed the rear anti-roll bar and it felt better, we were definitely going in the right direction but it still wasn’t quite enough. On entry it felt more calm and we’d reduced some of the mid-corner understeer but over the course of the final run it was pretty clear we also needed to look at the ratios for Saturday. Overall not too bad but I think there’s quite a bit more to come for tomorrow.”

Giedo van der Garde: “”FP1 started off ok. The car balance wasn’t too bad but as the tyres started going off it was oversteering more than I’d like and it felt like we needed to add more wing to control that, mainly in the low-speed sections, especially with the lower downforce setup we started with. It was pretty good in the high-speeds but we added a bit more wing for run two and initially it was a bit better. We’d switched to the second of the aero configurations we were trying in the session and unfortunately it didn’t go to plan as I went off in turn nine towards the end of the run – that was FP1 over, but we had 15 laps on the board by then so it didn’t compromise us too much.

“At the start of FP2 the car balance was better after we’d made the changes over lunch but I was still struggling with understeer in sector one and oversteer at the end of sector two, and less traction than I’d like in turns 11 and 17. For the run on options we added more front wing but I couldn’t put a really quick lap together. We finished with the usual long run, starting on hards and they held up well over the 20 lap run we did before boxing just before the end of the session. To be honest, it didn’t feel like there was a lot of difference between the hards and the mediums but we’ll look at the data from both cars tonight and see where we can make progress tomorrow. Overall it was a bit of a frustrating day, but I know there’s more potential in the car so I’m as positive as ever and we’ll come back fighting tomorrow.”

Marussia:
Max Chilton: “It has been really good to get my first taste of the mighty Suzuka Circuit today, but as we have seen, it is quite a tough track to get to grips with. From the early part of the morning session it was clear that setting the car up for this track and achieving a good balance was going to be quite a challenge. That challenge increased when Jules was unable to take part in this afternoon’s session and we had to make every lap of data gathering count. I’m pleased with how my afternoon session went in terms of improving the car balance and my overall pace, so I’m looking forward to continuing this progress tomorrow.”

Jules Bianchi: “It has been a tough day and with only 8 laps completed it is not the way I had expected things to go in my first sessions at Suzuka. My chassis was too damaged for me to take part in FP2 so the Team are building up the spare chassis and I will run again in FP3 tomorrow morning. We have a lot of work to do now – me with my engineers and also for the mechanics building the car up for tomorrow – so all we can do is work hard and hope for a better day tomorrow.”