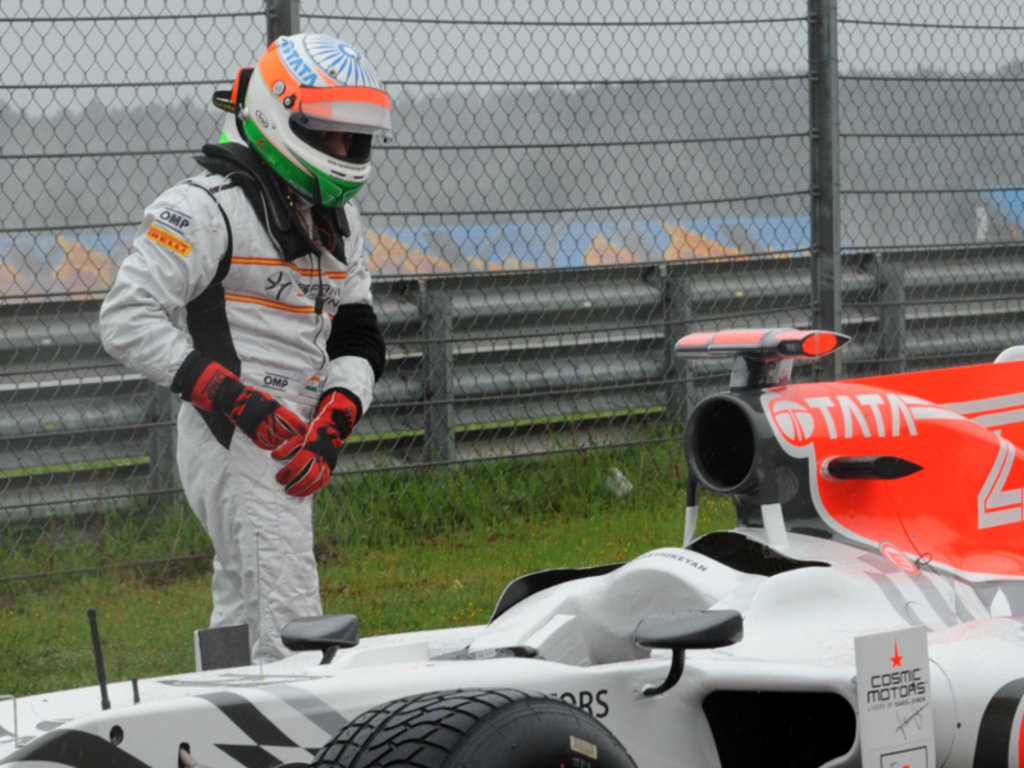 Williams:
Pastor Maldonado: “It was an unlucky day. It was wet this morning so we decided not to do too many runs. This afternoon we lost a bit of time as the team were fixing the rear end of the car after I crashed at the end of FP1. When we did get out, the speed was there but on the long run I made a mistake and lost the car at the exit of T8 and crashed into the barrier damaging the front wing. However, I know this circuit and the car has improved so I’ll be up there tomorrow!”

Rubens Barrichello: “The new package is promising but we had a KERS water problem which meant our day had to be cut short. It was a pity but we are optimistic as the new front wing, rear wing and other parts were all working well and we were running competitively. Our main objective is to start in the top ten this weekend and that’s definitely realistic.”

Team Lotus:
Jarno Trulli: “I’m pleased in general with today. It’s been a positive, trouble free day and we managed to run through a number of options that give us a good direction for tomorrow and the race. We have made an adjustment to the power steering and that’s definitely improved things in the cockpit for me but there’s more to come from that and the whole car so I think we can go into tomorrow in good shape.”

Heikki Kovalainen: “That was a reasonable session for me – I had a DRS issue that definitely cost me some time but I think the balance was pretty good and we got through some decent setup work so I think we’ll be ok tomorrow.”

Virgin:
Jerome D’Ambrosio: “It was a good day. This morning’s session was obviously disturbed by the rain, which even if it wasn’t great for this weekend’s programme, l can still see it positively as it was the first time I’ve driven the car in the wet; so it was great for me to get an idea of how it feels in those conditions. The afternoon went pretty smoothly. We had a small issue with the power steering and we lost a bit of time and so we couldn’t do everything we wanted, but in the end I think the car feels fine and I’m looking forward to tomorrow.”

Timo Glock: “The weather has made for a difficult start to the weekend. This morning it was very tricky for everyone as there was a lot of standing water everywhere. In the second session we got a better chance to start evaluating the new package, which was really the priority for today because we knew there would be a lot of work to do. There have been some issues we have had to deal with, especially with the exhausts, and once we work through those we will be better off. Overall we need to look at the data we have gathered now to see what we can learn about the new package because, as we predicted, it’s not easy getting something so new to work straight out of the box.”

Hispania:
Narain Karthikeyan: “We tried our updates out today, with the first session being wet we obviously couldn’t evaluate much but after the second session it’s clear that the updates are a positive improvement. The team is going in the right direction. Today we worked on the mechanical balance of the car and now we have to take a look at the data to see if we improved. Personally, I need to get some laps under my belt on this track because last time I came in 2005 it was an absolute disaster, I experienced a lot of mechanical problems. So bit by bit it’s getting better. Unfortunately I didn’t get a good run on the option tyres but the primes were fine. I think the options will be quicker in the race.”

Tonio Liuzzi: “Today we had a decent day of testing. The morning was good as it was my first chance to try out this specific car with the Pirelli tyres in wet conditions, so I got some good data and strung together some good laps. In the afternoon we did a good amount of laps, we needed to understand a few things about our new updates so we had to re-balance the car and work on the set-up meaning that in the end, with the option tyres, we couldn’t do much as there was a lot of traffic and yellow flags. But, all in all, we’ve come away with good data to work with tomorrow.”