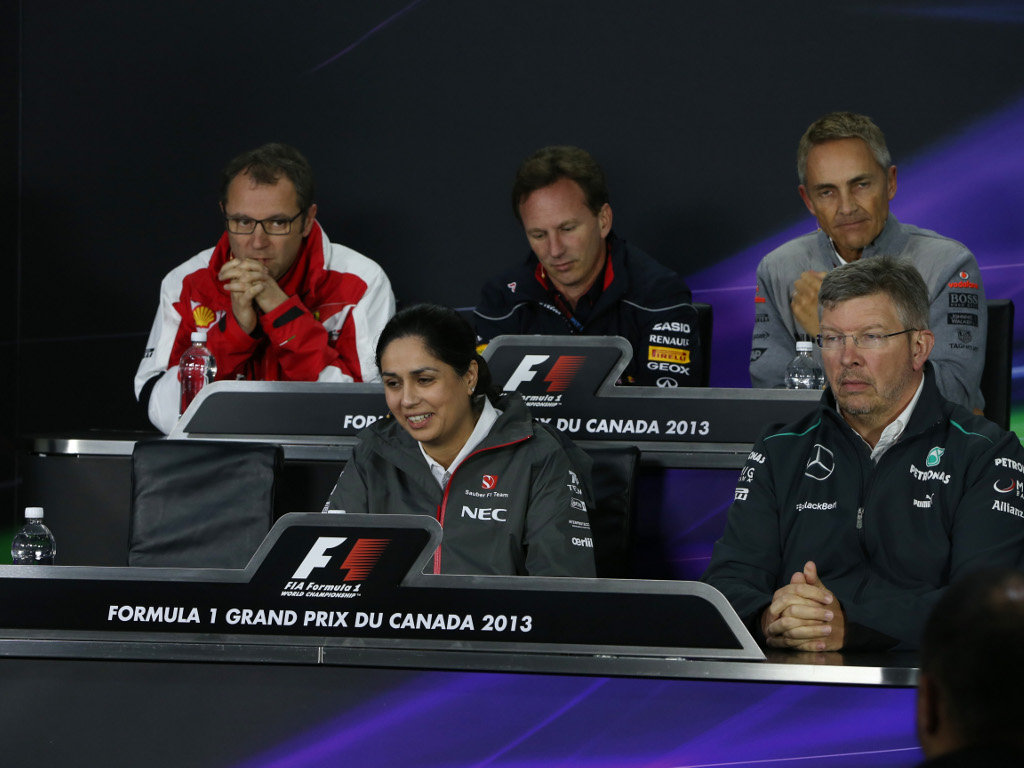 Q: Monisha, gentlemen, I’m sure most of my colleagues here would like to hear your views and opinions regarding the tyre test carried out at Barcelona last month. I’m afraid it’s ladies first, Monisha; can we start with you?

Monisha KALTENBORN: First of all, to really have a proper opinion you need to really have all the facts, which clearly we all don’t, as a team, but from what we know, what we read in the media, it appears that it’s not been in line with the rules, what has happened. And from that, of course, we have to consider the possibility: could the team gain an advantage from that. Reasonably, you could imagine that but again, without the facts it’s difficult to completely assess that and there we also would have to look not only at what’s happened this year, or could happen for this year as a benefit, but also for the following year because this is a time when all of us are defining certain parts of our new car and I think it’s important to see if there any benefits could have arisen for the team because that’s something which you really can’t catch up later on as a competitor. But I’m glad it’s gone to the Tribunal and I’m sure they will assess all these aspects properly.

Martin WHITMARSH: I think so far we’ve chosen to keep our views to ourselves. As has just been reported it’s gone to theTand I think they are presumably gathering all the facts and they can take a view.

Christian HORNER: Well our feelings were fairly clear because we raised a protest about it in Monaco. So we believe that it is the responsibility of the entrant to comply with the regulations, so when it came to light that a test with a current car had taken place, our interpretation of the regulations is that that was in clear breach of them and therefore we raised a protest prior to the race for it to be dealt with as an issues by the FIA. It’s really an issue between the team and the FIA. Obviously Pirelli have asked several teams to test, ourselves included but we have declined to do so because we felt that it wasn’t in line with the regulations, certainly with a current car. That’s the situation. It’s gone to the Tribunal and we trust in the FIA to make the appropriate decisions regarding it. I think the important thing is that there needs to be absolute clarity moving forward in terms of what you can do and what you can’t do going forward, you know, what is testing and what isn’t testing. I think that’s more crucial than anything, it is to be fully resolved.

Stefano DOMENICALI: Not a lot to add. There is an enquiry; there is this international Tribunal that will handle the situation. They have all the elements for that. So honestly, nothing to add on what we already discussed and for me it’s important that there have been… we were involved in this because we received a lot of questions by the FIA, they have taken their position, so for us it’s pretty clear. Therefore, we wait and see.

Ross BRAWN: I think, as has been mentioned, the matter has been passed on to the international Tribunal. They will meet presumably in the next few weeks to determine the facts of the case. My personal opinion is that when the facts of the case come out, then people can make a judgment. Obviously we felt we were in a position to be able to do the Pirelli test – it was a Pirelli test, it’s very important to note that – and so the Tribunal will be the time at which all the information will become available. A couple of points I would make: there has been an unfortunate branding of the ‘secret’ test. It was a private test. It wasn’t a secret test. I think anyone who believes you can got to Barcelona and do three days of testing, or 1000km of testing, and not have anyone become aware of it is na