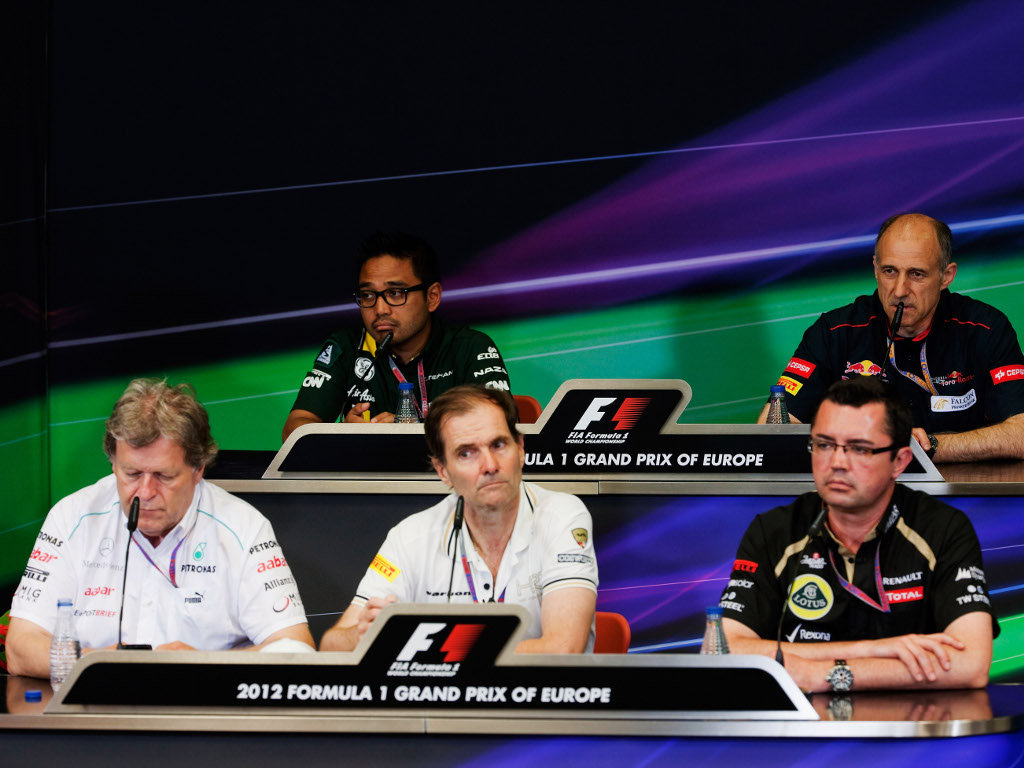 Q: Franz, as it’s your first time in the press conference this year, can you give us an assessment of your two new drivers? They’ve had time to settle down. Two drivers for whom there are a lot of new circuit too.
Franz TOST: Yes. Daniel Ricciardo, our driver from Australia, he is a little bit more experienced, he did already 11 races last year. So far he is doing a good job. He is a highly skilled driver. He is committed, with a positive attitude and so far I must say he is really doing a good job. Jean-Eric Vergne, his new, a French driver. Last year he did Formula Renault 3.5 litre and of course all the tracks are new for him. It’s not so easy, Friday morning, in the first session is to learn the tracks. But also he is a highly-skilled driver. I rate him very high. He is doing a good job and improving from race to race and if we provide the drivers with a good car they show a good performance.

Q: The car itself: Is the team able to ensure that the car is maintaining a good position, even catching the teams in front?

FT: We started the season quite successfully with ninth place in Melbourne for Daniel Ricciardo and then eighth place in Sepang with Jean-Eric Vergne. Then afterward, I don’t know, we struggled a little bit. Our direct competitors improved their performance, Williams as well as Force India. They are clear in front of us. We brought some new parts here. We have to analyse the data and everything and hopefully set-up the car in a good way tomorrow for the qualifying and then for Sunday for the race. But there is a lot of work in front of us because currently the gap increased instead of decreasing.

Q: Riad, first of all, I think you’ve got some developments here, but how much more can you do. How much closer can you get to the teams in front this year?
Riad ASMAT: I think what we’ve done is obviously going to be a progression but there is a huge push back home obviously with the team we have currently. We have some parts here, hopefully again we evaluated them today and if we get the set-up right for tomorrow then maybe we will pull a lucky one. But I’m more looking forward towards to Silverstone and onwards where more developments are being done for the car and hopefully by year’s end we’ll be able to prove our worth, where we actually aim to be this year.

Q: And you’ve got changes to the team. The team is moving and you have John Iley now as well.

RA: Yes, it’s been positive. We had a real look over the past three years in terms of what we’ve done in terms of investment and in terms of people. More importantly people – the latest being John. He’s been with us a couple of months now and he’s actually very influential now with the performance levels we’re aiming for. Again, we’ll be moving to Leafield in August. I think that’s a definite plus for us. It’s a bit tight for us now in Hingham but with the ambitions we have currently I think Leafield is the right place for us.

Q: Norbert, a certain amount has been made of the fact that you’ve had four mechanical failures on one car and the other one has done every single racing lap. How easy is it to explain that?

Norbert HAUG: Well, things like that happen. This is not our plan and we are not satisfied with these results for sure. I really feel sorry for Michael. This should not be the case, these are not our standards; the team can do a better job. But we need to have a calm and concentrated approach and I think all my colleagues here have been through phases like that. That happens in Formula One if you’re pushing and on the limit. But still, it is not our plan to be like that for sure. We will fix that. A lot of people are working in a concentrated and focused manner. Michael is a perfect team player and I would have every understanding if he would be critical but he never is outside the team, so he fully supports the team and we support him. I think he is an example for each and every driver. His behaviour is just first class and so authentic. I rate that very, very highly. Going through thick and thin he could complain and say ‘I should have as many points as Nico’ or stuff like that, but you never hear that. He’s a professional and he deserves good results. I hope they will come sooner rather than later. And again, he deserves that. We need to give him a fully competitive and fully reliable car and we’re working hard to achieve that.

NH: Well, I think that whatever we did in the past, we have had at the last race the 300th race together with our partner McLaren-Mercedes and they won 73 grands prix. So we have been here for quite a while but what I think we never did is make any predictions or announcement saying ‘we are going to win the next race or fight for this or that’. We do our best job and we are doing it in a focused and concentrated manner. I think if you see that we have had two difficult at the beginning, Nico being on the last lap in Australia eighth and then he had a coming together with another car and lost points eight points and was 35 points down to the leader and now he’s 21 points down, so this is certainly the right direction. But we need to score points on a regular basis, we need to hopefully win more races and we are working, again… very focused on the direction. I think if you look at today, Nico did the fastest time on the prime tyre and then he was on the option. But he had this handicap of a yellow flag. Whatever Friday times mean, he would have been in a position to probably post the quickest time. And then the long runs look quite good. I don not know what that means compared to the others because you obviously do not know the fuel loads but our lap times were consistent. I think they have been in Canada. We have been very competitive in Monaco and we won in China. So the last five races I think we had three times good and convincing speed to be at the top or to mix with the top guys. Hopefully we can continue that trend. I would never go so far as to say we are definitely fighting for the world championship but of course it has to be the ultimate target. If we can achieve it, it would be fantastic and it would our ultimate goal for sure.

Q: Luis, first of all, brake problems in Canada. Have you got them beat here, do you feel – as this is quite a tough circuit on brakes as well.
Luis P