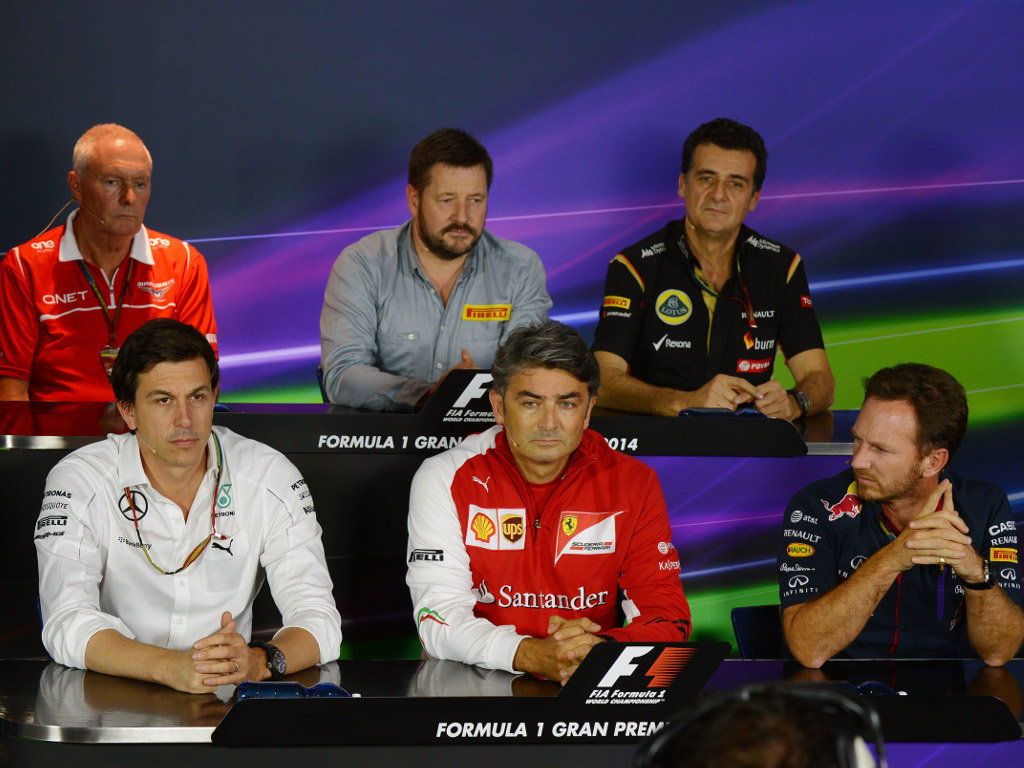 Q: Toto, could I begin with you? First of all, can you bring us up to speed with what happened to Lewis Hamilton this afternoon; we saw he lost at least an hour of running. What was the problem and what else have you lost?

Toto WOLFF: Yeah, obviously not very good. We lost a lot of running due to an electronic problem, which we need to identify yet. It shouldn’t be a big issue but losing valuable time in free practice two is obviously not perfect.

Q: Looking back to the last grand prix, can you tell us what new rules have you imposed on the drivers since that collision in Spa and given that there will always be, I guess, close calls on track between drivers in a tight championship fight, are you convinced that they will be enforceable?

TW: First of all, you know, if that particular incident would have happened somewhere back in the field it would have… or it has been actually judged as a racing incident. Now you don’t want to see these kinds of things between team-mates and I think this is valid for any other team and particularly not between team-mates who are racing each for a win, for a podium. We’ve made it very clear that we want to stick to our philosophy in letting the drivers race – it’s about the Drivers’ Championship, we acknowledge that, that this is the most important championship. Nevertheless, what we said from the beginning was that there shouldn’t be any contact between their cars and I guess this is valid for us and it is valid for any other team and this is why we re-emphasised that point.

Q: Christian, coming to you, it looked pretty close today in terms of times at the top of the running and two wins in the last couple of races. Does this give you belief that maybe you could pull off an unlikely ambush in the championship?

Christian HORNER: Well certainly Spa was a big surprise for us, we didn’t expect to be competitive there and ended up winning the race. Monza is a different challenge. We can’t go any lower on downforce without taking the wings off. Obviously everybody has come down on downforce level this weekend. Hopefully we can put in a good performance tomorrow, get as high up the grid as we can and have a grandstand seat to see what happens between the Mercedes boys at turn one.

Q: Obviously engine penalties are looming, with only five engines per driver allowed this season. Can you tell us what has been discussed in your planning meetings on this, what it’s yielded and how you think it might affect these next few grands prix in the championship?

CH: Well it’s inevitable for us that with the amount of failures we’ve had this year that we’re going to have to take an additional engine at some point. We don’t have to take it just yet but certainly over the next four races I would think we are going to be faced with that question. Where other teams are in their sort of duty cycles with their engines and gearboxes is unknown to us. So we can only focus on ourselves and deal with issues as they arise. Sebastian’s situation is slightly worse than Daniel’s because he’s had the lion’s share of issues during races on his power unity. So we’ll see how the next couple of events go.

Q: Thank you very much for that. Coming to Federico Gastaldi, the Deputy Team Principal of Lotus. Obviously Gerard [Lopez] is unable to join us I take it?

Federico GASTALDI: He was trying to… actually he’s here at the race track but for some reason he was stuck in traffic and he might be arriving any minute, so I apologise for that.

Q: OK, so let me ask you the first question I was going to ask him, which is that there’s quite a contrast between the Lotus of 2014 and the Lotus of last season?

FG: This year obviously with the new regulations, I mean everything has been a big change for everyone, but for us certainly it’s very, very tough. Actually at the beginning we thought it was only an engine problem but as the season kept going we found out we had different problems. We try to learn from every race and we try to improve for the next one but so far it’s not been very positive for us, that’s all.

Q: And what measures are you and Gerard and the rest of the management team putting in place for the future?

FG: We are trying to… everyone know we have lost very good, experienced people form the team, going to other teams and that affected us a lot and also we were trying to find a solution for the engine, so that’s the key for us.

Q: Thanks very much. Coming to you, Marco. Obviously it’s your first Italian Grand Prix as a team principal of Ferrari, so can you describe your emotions, your workload and obviously your feeling on the performance today?

Marco MATTIACCI: It’s my first Monza, as you said. I’m impressed about the passion around Ferrari. To see all these children outside, people cheering at us, it gives us positive pressure and responsibility and motivation to keep working very hard. It is Friday, we have good indication that we keep working consistently, but it’s still Friday, so I would until Saturday afternoon, Sunday afternoon.

Q: In your various appearances here over the course of the year so far you’ve given us your vision. You’ve been arguing recently that you think there needs to be a change to the rules to developing engines in-season. Why do you think that’s the right thing to do for Formula One?

MM: We’ve been discussing this all together, so I think that Formula One is about innovation. I think that naturally who did a fantastic job, it’s important that it’s clear that he’s ahead, but I think that to wait one year, to give possibility to catch up with the best, to develop and to innovate is too much. I think fans sometimes they don’t understand why we need to wait so long to close the gap. But at the same time I think that we can find a balance to do some productive progress and probably loosen up the rules in order to see a little bit of work on the engine, to let our engineers be creative and to improve.

Q: Thank you very much for that. Obviously yesterday we heard from Max Chilton about the situation in Spa regarding him. In your mind is that now fully resolved and where has it left you?

John BOOTH: Well, I don’t want to dwell on it for too long, I think we’ve done it to death over the last two weeks. Obviously down at our end of the grid sometimes these things happen. We normally like to deal with all this sort of stuff in house but with a four o’clock deadline on Thursday at Spa it wasn’t possible. But we managed to resolve it overnight and things were back to normal and the important thing is that we look forward and move on.

Q: Turning to your driver, the other driver, Jules Bianchi, he obviously got himself into Q2 again at Spa. With your extensive experience over the years of young drivers, how would you describe his development and do you think you can hold onto him again for next year?

JB: The first part is pretty easy. Jules is obviously a very special driver. He’s always been quick – from the first day he sat in the car at the second winter test at Barcelona. But now he’s got much more maturity. He’s learned how to manage tyres, how to manage his pace, manage to manage the whole race situation. I think he’s maturing into as top-line driver. As regards holding on to him, maybe I’m not the person you should be asking?

Q: Maybe we’ll ask Marco about that?MM: Bianchi is a guy that is coming out of the Ferrari driving academy, that is a very important project for us, and it is clear that we want to venues for a talent to express himself. So that’s what we are going to work on.

Q: Finally, Paul: a home grand prix for Pirelli, so tell us what you’ve learned today about the performance of the tyres, what we’re likely to see in terms of strategy?

Paul HEMBERY: It’s pretty straightforward from our point of view. It’s a circuit that is low on abrasion. High speed is the biggest challenge, so structurally it’s a challenge for the tyres. The difference between the tyres is about half a second, six tenths, so not a great difference to create any interesting strategies. You lose a lot in the pit lane here, so like last year looking at a one-stop race.

Q: The tyres this year, generally though, have made for races where there have been a number of strategy options. Do you feel enough has been made of the impact that this has had on the racing?

PH: I think it’s been a reasonable balance. We are having less stops, coming up to about one per race less than in the past. But this year was always going to be about the new technology of the vehicles and quite rightly. The change in regs has given us some pretty exciting racing, which has been wonderful to watch.

Q: (Daniel Ortelli – Agence France Presse) A question for Toto. It’s not a question about Hamilton and Rosberg, I hope you’re happy. It’s about the Russian Grand Prix. There’s a lot of talk about the Russian Grand Prix this week. I want to know what’s the position of your title sponsor Petronas about the Silver Arrows racing in Sochi a few weeks after the tragedy of the Malaysian flight?

TW: I would have preferred the first question. You know we are a sports team and we are a sports team and I think that sport should unite. We must rely on the governing body and the promoter to give us guidance and to give us information. It is always dangerous to read the news and build an opinion, because that opinion could be very wrong of what is really going on. And I think this is what we are going to do, rely on the opinion of the FIA and decide or then go forward, with their guidance.

Q: (Ian Parkes – Press Association) Toto I do have a question about Nico and Lewis. You were quoted in a radio interview that you would potentially risk changing your driver line-up should there be any further indiscretions from your drivers in the future. Could you just clarify that remark as to what circumstances would force you make what would appear to be a drastic change?

TW: This was exactly the context – what would happen if we could not get on top of the situation. Obviously at that stage we are very happy with the line-up of the two drivers and we’ve always said that. We trust them and we had a very good discussion with the two of them, a very clear discussion, and we’ve always said that this shouldn’t happen and I think at that stage of the season maybe it was important to re-emphasise that. My statements were about what would happen if we wouldn’t get on top of it and this is something obviously which is a very, very worst case vision and I don’t think that we were ever going to get there.