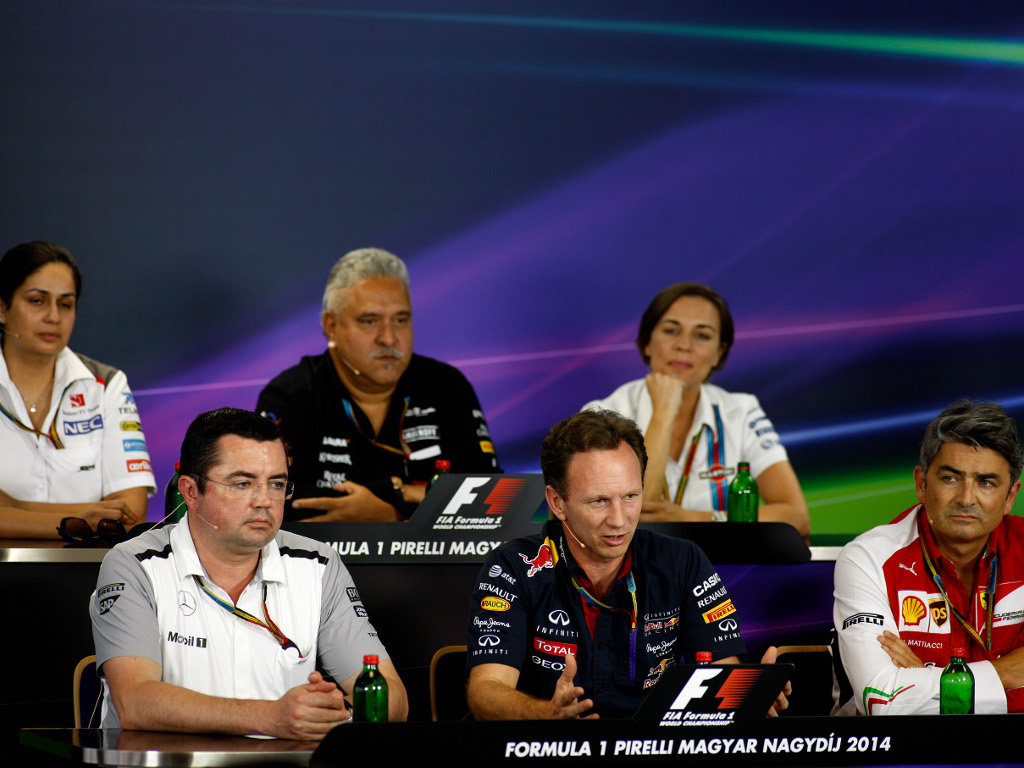 Q: Claire, ladies first, if I can start with you. Phenomenal performances recently, everyone is asking can you take a win somewhere? Will it be on the fast circuits coming up after the break?

Claire WILLIAMS: I hope so. That’s why we’re here, to win grands prix. The team has done a great job this year to turn everything around. We’re building towards that. I think we’ve still got a lot of work to do. The Mercedes are quite far ahead at the moment. I think we closed that gap a little bit in Germany, so it will be exciting to see what we can do here this weekend and then obviously moving to Spa and Monza.

Q: Do you think the faster circuits, the longer straights are going to be to your advantage? You’re quick in a straight line.

CW: Yeah, I’d like to think so. Obviously the Mercedes power unit has helped to drive our competitiveness this year, so it’s absolutely a factor.

Q: Now, Susie Wolff made history history with, admittedly, a brief appearance at Silverstone. She did well at Hockenheim as well. Has that represented a step forward for women in motorsport do you think?

CW: I’d like to think so. Obviously Susie’s appearance at Silverstone was short-lived but she was the first female to take to the cockpit on a grand prix weekend in 22 years. I think she has set the standard in Formula One. It would be great to see more women coming into the sport in a racing driver capacity and I think she does act as a role model in that sense. She did a great job for the team and at the end of the day, for us, that was the most important thing.

Q: Thank you. Vijay, welcome. The results keep coming for Sahara Force India but McLaren have made a little bit of progress, the gap is now just two points. Have you slipped a little bit, what’s happened there?

Vijay MALLYA: I don’t think we’ve slipped. We continue to do our best, we’ve scored points in every race. Williams have done an outstanding job. I think that was pretty clear in pre-season testing. The results are showing. But I think between Williams, McLaren, Sahara Force India, Ferrari, the gap is small and can be closed even in one race. Of course, the double points in the last race may change the equation completely and one never knows in whose favour. We feel quite confident that we can fight to stay where we are or maybe even get a little ahead. I think it’s realistic to be optimistic as well. As long as you have confidence in what you’re doing and the car is performing, no hard luck stories, there’s a lot to look forward to and many races to go.

Q: Do you think you can keep up the development, stay ahead of let’s face it a bigger team, in many ways, McLaren?

Q: I’ll come to Eric on that question in a moment, but you must be very happy with your two drivers, they’re doing a great job. Do you want to keep them, can you keep them?

VM: We have options on both. I’m very happy with both of them and I see no reason why we should be looking at any change.

Eric BOULLIER: It’s obviously, first, hard work back in Woking. Everybody is working definitely hard to get to the way we want them to go and the work is paying off in the end and you can see on track we are bringing upgrades every race and we start to be able to work a little bit in a higher position.

Q: Will you carry on developing this car? When do you actually move over to working on next years, with particular reference to the challenge of a new power unit?

Q: Thank you. Christian, coming to you next. This time last year you made a massive step forward, through the summer break as it were, to win all the races after the remaining races thereafter. Can you compensate for the problem you perhaps have with your powertrain and make a big aero jump this year?

Christian HORNER: In all honesty it’s probably unlikely. If you look at the gap, it’s a significant gap. Last year was more of a level playing field on the power unit side. But obviously with the big regulation change it’s reshuffled things, Mercedes are doing a super job and they deserve to be in the position they are, they are in a position of real dominance, dominance we haven’t seen for a long, long time, where they keep scoring these one-two or one-three finishes and it’s a significant amount of performance to close down. But we’re keeping pushing, we’re keeping the hammer down and hopefully after the summer break we’ll have some circuits coming up that we will be able to get even closer to [them]. But I don’t think you’ll see a situation like we had last year.

Q: We’ve heard some speculation about Sebastian Vettel’s future. Is there any substance to it or is it silly-season nonsense?

CH: Well usually it’s the start of the silly season where he’s either going to Ferrari or Eric’s made him a big offer or maybe going to Mercedes. So, we just wait to see which team it’s going to be. But no, Sebastian’s absolutely committed to the team, there’s no doubt at all that he’ll be with Red Bull next year and he’s enjoyed so much success with the team, he’s happy in the team and the team are very happy with him. We know we’ve got a lot to do. None of us are comfortable or happy with the situation that we’re currently in – but, y’know, we’re in it together and we’ll work our way through it.

Q: Monisha, similarly, you made big advances in the second half of the season last year and you must be hoping that you can do the same. What are the chances?

Monisha KALTENBORN: Well you really can’t compare actually, last season to this one. We know the reasons why we are like this, this year. Of course it has to do with all the rule changes that came in. Last year we took a certain risk. We were well aware of it but if you allocate the resources you have more to last year’s car, this will have an effect on the new car. It’s good that we know the reasons but we clearly have to stop making the mistakes we have been making in the last races. So I do hope that we’ll make a step ahead but to be realistic I don’t expect we’ll take that kind of a jump.

Q: Yesterday there was confirmation of a future Mexican Grand Prix. What does that mean to you – and also the fact that Azerbaijan seems to be coming onto the calendar in a couple of years’ time as well. The calendar is expanding: what does that mean to a team principal?MK: Well looking at Mexico, of course it’s very good news for us because we know that our partner Telmex and Carlos Slim particularly has had this long-term vision to establish motorsport in Mexico. He’s been pursuing this for many years and this has many elements to it, like the Escuderia Telmex, with the drivers, they then got their driver – Sergio – into Formula One and they’ve been working on this grand prix. And we also know how important that is for the other partners we have. So, such a race, which has so much heritage, returning now is fantastic for the sport and I’ll sure we’ll see how many fans we have. We were there a couple of years ago doing a show run and we couldn’t believe that 200,000 people came out to see that. That tells you what a strong fan base it is – and that’s a very positive sign.

Now, if you’re taking the races beyond 20, I think we’ve had that discussion as well, that I think we should be careful of not saturating the year with too many races. We know what it means on our personnel. We might have to restructure things again, so I think we should be careful before we take these kinds of steps, and also where we go to – because we want to establish Formula One in these countries, not lose heritage races. So it’s a difficult.

Q: Marco, we’ve seen Fernando Alonso drive some phenomenal races, the last couple of races. Real classic Formula One, wheel-to-wheel stuff. How does that reflect on the team? What’s the mood with the team when they see races like that?

Q: Just motivating, or more than that?

MM: I think when you see your driver that is driving like that, that is very motivating for the team.

Q: And do they want Kimi to be doing the same thing?

Q: There’s been some harsh criticism of the car recently. What’s your response to that criticism?

MM: Which one are you referring to? Internal criticism or outside?

MM: Everybody is free to make comments. I’m happy that they have time to think about our cars because I don’t have enough time to think about other teams’ cars. I know what you are referring to. I think it’s a statement taken out of context. He has a big title and, as I said, I have the utmost respect for Niki Lauda. For me he is an iconic figure of my childhood and in particular for Ferrari. Today he came to our pit to apologise and honestly I feel very uncomfortable for Marco Mattiacci or Ferrari in this case receiving an excuse from such a champion that I think has been put in middle of something. But I think it’s clear he is a friend of Ferrari and I have utmost respect for Niki. So chapter closed.