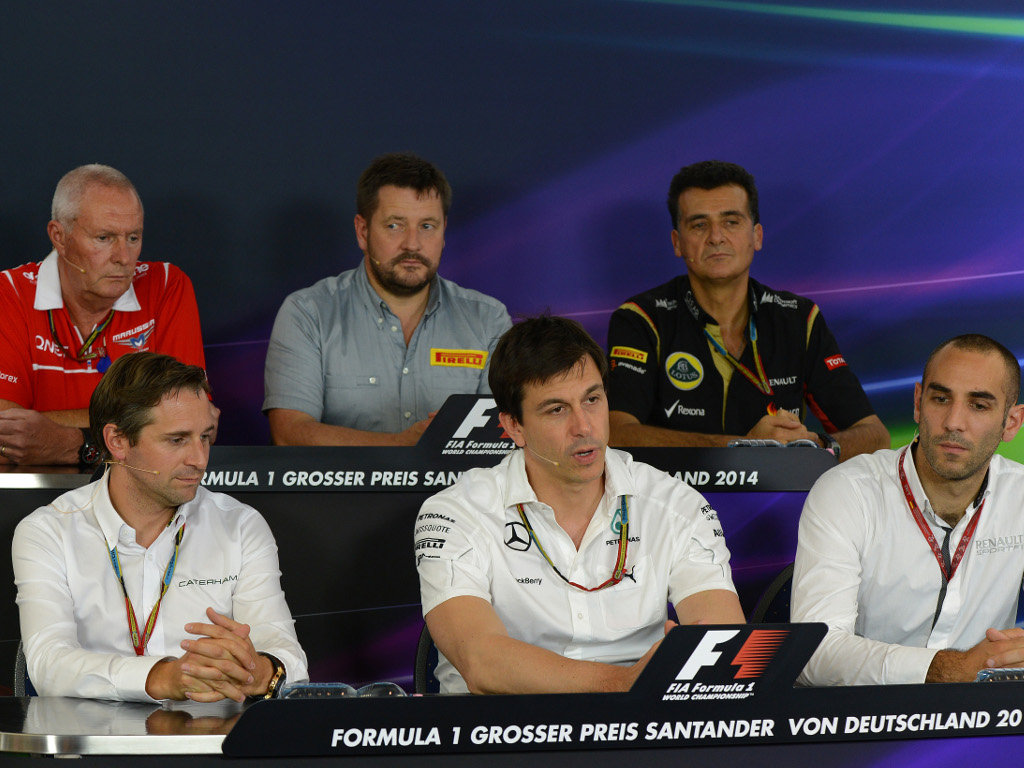 Q: Cyril, if we could start with you. Perhaps you could tell us why the job change to Renault, was this unexpected and what have you seen so far?

Cyril ABITEBOUL: Well, what can I say about this to answer your question. Obviously there is an element of confidentiality, so I will not disclose everything. Let’s put it this way: I have been doing 10 years with Renault before joining Caterham. Before joining Caterham I left on very good terms with Renault, we are, I hope, long-time friends and I hope this will remain the case. Obviously the situation with Caterham was not working – the whole structure, from shareholder to the structure in place was just not delivering, so something had to change. Lots of things are changing. I think that’s good. From my perspective also I had to change. There was some appetite at Renault to turn around what is happening on the track, not just the engine situation, it’s wider than that, so there was an opportunity there and that’s it.

Q: Tell me, how much of the effort that’s going on is around trying to fix the problems that you’ve got in 2014 and how much is looking forward, because obviously 2015 offers you an opportunity to try to get a bit closer to the Mercedes engine for example with the new homologation that comes in in February.

CAb: Anyway the engine world is not exactly the same as the chassis world, in the sense that with the homologation you are not free to develop the engine and therefore what we can do this year is fairly limited. What we need to focus on right now is to get reliability sorted out, because clearly what we are delivering on track is not acceptable for some of our customers. We need to fix that, clearly; this is for this season and see what can be done from a performance perspective. Next year, we are quite well advanced actually, there was already the first fire up of next year’s engine on the dyno this week, so there is a programme, it’s going well, we need to improve performance but it’s already interesting to see this weekend with all the changes chassis-wise and engine-wise that there is some progress so hopefully it will be confirmed tomorrow.

Q: Replacing Cyril as team principal at Caterham and joining us for his first press conference since 2007 when he was a grand prix driver is Christijan Albers. Christijan, you’re now in your second race in charge, what’s your verdict so far of the set-up, what’s been going and what are the first areas on your priority list?

Christijan ALBERS: First I would to start [by saying] that the thoughts of myself and the team are with the tragedy of the Malaysian Airlines. I feel sorry for their loss. I think that’s the most important thing today. Team-wise… yeah, it’s not easy. You see people in a team fighting for four years to get a good car that delivers performance and it did not work so it’s very important to motivate the people again and to get the right structure in place. I think we are a little bit in that direction. I have a lot of faith in the new technical director John Iley, also the chief designer Keith Barclay and also the new team manager Miodrag Kotur. So, you know, we are pushing. The only thing I can say about the team is that we need progress and stability.

Q: Can you tell us anything about your drive line-up? Do you plan on retaining the same two drivers for the remainder of the season?

CAl: I want to see results; that’s very important for every Formula One team. To be honest today I think they did a good job. We had some bad luck in the second practice, but they are sharp and we know we need performance and also of course with a team as Caterham F1 we also always need a little bit of budget.

Q: John coming to you, on the face of it you’re in quite a strong position. You’ve got two points on the board; you’re ahead of Sauber and Caterham of course. How does it feel inside the team and what’s the short and medium term plan?

John BOOTH: Well, we’re obviously very comfortable with where we are at the moment. We were very happy to get the two points in Monaco but there are nine races still to go and obviously anything can happen. We’ve got to keep pushing and keep focused and try to defend as hard as we can from Caterham and Sauber.

Q: After the Barcelona you took a noticeable step forward in performance. Was the Silverstone test equally positive and do you feel you’re closing in on Sauber now? How far behind do you think you are?

JB: One of our test days in Silverstone was a Pirelli test day which was very helpful for 2015 and the second day we spent a lot of time thinking about running without any sort of linked suspension, so we got a useful work done on the second day.

Q: Toto, obviously 326 points on the board in the Constructors’ Championship with your nearest rivals on 168 but still a few alarm bells – Nico Rosberg’s gearbox problem in Silverstone wasn’t the first time you’ve had a problem with a gearbox. How’s that being tackled?

Toto WOLFF: First of all it must be tackled. We are looking very solid in terms of pace. The guys are quick and the car was very reliable at the beginning of the season, if you look besides Melbourne. And since then we had a couple of issues and we must get on top of it. We are working hard and trying to understand how to improve mechanical reliability. This is one of our most important topics, obviously, because in order to win you need to finish first.

Q: Obviously we’re at the halfway stage in this championship and Lewis Hamilton is just four points away from Nico Rosberg. He calls this a reset moment. How do you see the battle between the two of them and how has your management of that evolved over the half-season so far?

TW: You see how quick it can go. The discussions we had before Silverstone were ‘will it ever be possible for Lewis to catch up 29 points’ and here we go, you have a DNF and your team-mate wins the race and it’s all on reset. It doesn’t need a lot of management actually. I think it’s about clarity and transparency between the drivers and within the company. It needs communication. This is what we do and until now, knock on wood, we haven’t had any issues. Also, both of the guys are so professional and on top of their game and know it’s important to finish the races. So, until now, I’m really happy with how it goes.

Q: Federico, Lotus has been a little up and down on performance: strong in places like China and Austria but then fell back a little bit perhaps at Silverstone. What’s behind that? Is it power-unit related or chassis related…?

Federico GASTALDI: Well, I think we’re still having problems understanding the engine – but we’re also having problems in Enstone, matching chassis, aerodynamics and the engine so we’re now trying new setups and also today we’re testing a new front wing. So, we’re trying to improve but it is a very, very slow process this year.

Q: You carried out the tyre test in Silverstone with Pirelli on the 18-inch rims. What did you think of that exercise?

FG: Paul? What do you think?

FG: Obviously for us it was a good experience. We’re very proud to be doing this work with Pirelli so it was positive.

Q: Paul, let’s throw it to you. What was the verdict after that test at Silverstone? When do you think you could introduce that tyre technology if it was requested – and what are the technical limitations?Paul HEMBERY: Yeah, I spent a week talking about 18-inches and it’s been quite an interesting time. It was an exercise that was born out of a discussion we had in the F1 Commission meetings when there was a discussion of, particularly in this case, tyres and what should happen with them in the future. We felt rather than discuss it, we ought to put some on a current car and people can actually decide and the F1 Commission can see real images of the car with that sort of tyre on them. These are 18, maybe 19 is probably more interesting going forward. Have to say that the feedback we’ve had generally has been very good. People have been forwarding us all sorts of surveys and fan surveys that they’ve had on their individual websites. Between 70 and 80 per cent, depending on the survey, have been very favourable. On a personal level, it looked quite good. I wasn’t really sure if I was going to like it, if I’m honest, but I thought it looked very good and quite natural. If it’s a route the sport wants to follow, we’d be keen to do. We, technically, could probably be ready in 2016 but the sport is talking about 2017 at the moment.

Q: Obviously this weekend you’ve come with the soft and supersoft tyres – some interesting results from FP2 here this afternoon – there’s been a feeling perhaps sometimes at a few races, you’ve been a little bit conservative with the tyre choice. Are you becoming more aggressive again now?