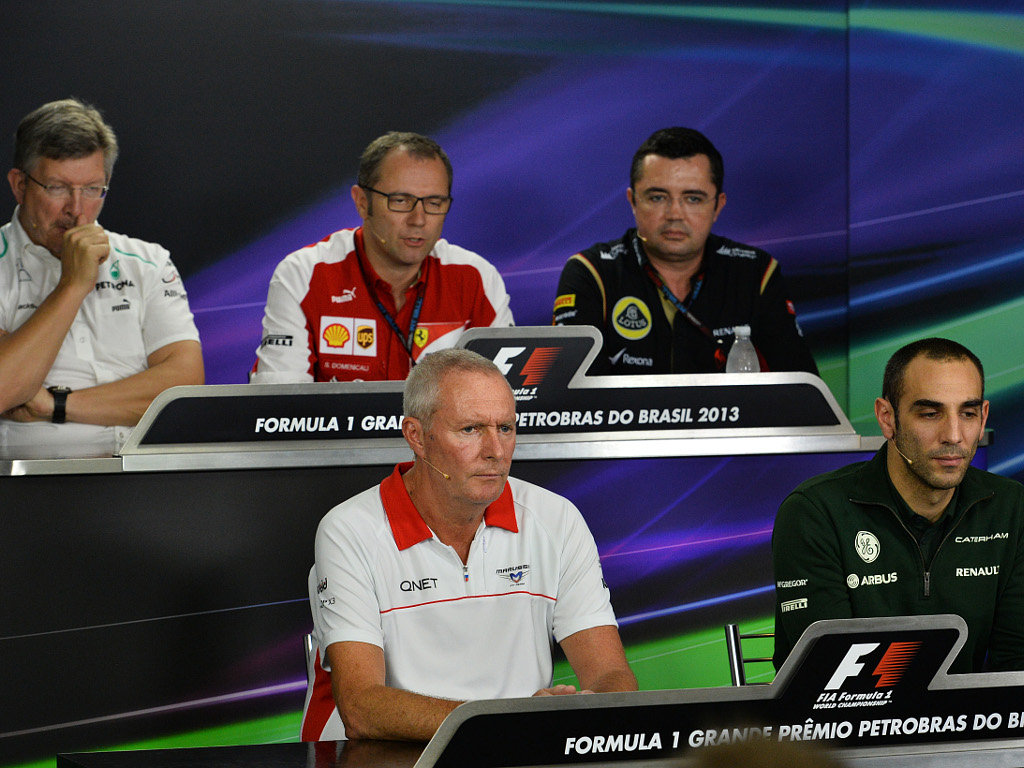 Question: I’ll start with you Cyril. One last chance to try to snatch that 10th place in the constructors’ table? From Caterham’s perspective, how costly would finishing last in the championship be? Can you afford that to happen?
Cyril Abiteboul: As you know, I can’t answer that question. I think it will be essentially costly for the morale of the team. Everybody believes that we deserve it. All due respect, I think we both have done a good job, but the figures tend say we deserve it just a little bit more than those guys. So, I mean that will be a race. I think whatever the result we are committed to the sport, so it’s not going to make a huge difference. I mean that will give a bit of a headache to my financial director but apart from that it’s not going to change our entire strategy to Formula One.

Q: How has the morale been in the team? From what we were hearing yesterday the rain dance was being performed on a regular basis by your drivers.
CA: Yeah, well it has to be performed again on Saturday. It’s been a drier season on Sundays. We’ve had quite a few events with some rain on Friday, sometimes on Saturday as well, and each time we’ve had rain on Saturday in particular we’ve been able to do something, in Spa and in Monaco, where we managed to qualify in Q2. So it’s a good memory. We like rain, so let’s see on Sunday.

Q: We’ll come to you in a moment John for your thoughts on this battle, but the big changes, Cyril, coming up next season with the regulations. How beneficial would it be to have a more experience driver at your team, a Heikki Kovalainen for instance?
CA: For instance! First of all I need to make sure that Lotus is not going to keep him. But apart from that, it will be a good thing to have some experience. But everything is changing next year. So, how much experience matters when everything is changing is one question. Having said that what we really want to have, because development, iteration, will be very fast at the start of next year in particular, you need a driver that all engineers, all the team can rely upon. So you want to have proper feedback, accurate feedback to be able to improve the car on an event-to-event basis. So that’s what we need. We need a driver who is transparent in the way that he is driving the car and providing feedback to everyone.

Q: John, 10th place in the constructors’ championship: can you afford to lose that 10th place this weekend?
John Booth: I think I pretty much agree with Cyril on his take on it. There may be a small financial consideration. But it’s the sporting matter that is more important. We are the smallest team, we operate with the smallest budget, but we are racers and we want to improve. Tenth place would be a massive plus for the guys in the factory.

Q: I’m sure you don’t agree with Cyril when he says that Caterham deserve that 10th place more.
JB: It’s been a good scrap this year. There has been a large spell in the middle of the year when Caterham looked much stronger than us. We had a good race last week and we think we’re getting on top of our issues. But it’s been a long, long season. We took that 10th place in Malaysia. The last update we brought to the car of any significance was Barcelona, so it’s been a long old season hanging on to that 10th place and it’s been pretty nerve-wracking to be truthful.

Q: With the updates that haven’t been coming since Barcelona, where do you see the improvements that have been made at the Marussia team?
JB: We’ve brought some small improvements and we’ve worked very hard at optimising what we have. I think we have gone forward but it would have been better to have two or three large upgrades through the season. But we are the smallest team and to build a 2014 car that has to be on the track in Jerez in January was a big feat for us and we’ve had to concentrate on that very hard.

Q: Thanks very much. Eric, if I can come to you. The fight is on for you for second place between yourself, Ferrari and Mercedes. Off the track, the fight continues to try to attract extra investment to the Lotus team. Can you give us all an update on where you stand with that on this Friday afternoon in Brazil?
Eric Boullier: Well, there is still some discussion ongoing, especially now between bankers. The process is not fully completed but I think part of it has been done, which is obviously a good sign for the weekend and we hope that everything is closed by early next week.

Q: When you say backers, you refer to Quantum Motorsports?
EB: Yes, sorry. But about the fight for the championship, I think second place, or even third place we need a little bit of help to get there. But maybe thanks to the funny weather we have we can expect the best of it.

Q: Stefano, you bid farewell to Felipe Massa this weekend, eight years that you’ve worked together with him at Ferrari. How would you sum up Felipe and what have been your highlights of the last eight years with him?
Stefano Domenicali: Well, first of all let me say one thing before going to the question, that is to express my solidarity to the Italian population of Sardinia that has been hit very deeply by flooding and the hurricane. Our thoughts are with those families and this population that is suffering a lot in this moment.
Going to Felipe, I think Felipe is leaving with an incredible weekend here, today in this city because, you know, we have the tendency to pass through everything without thinking. I think that what Felipe did with Ferrari has an incredible history. We had incredibly moments together. Difficult too, of course – but he is an incredible guy who deserved what he had and even if it seems a little bit too personal, I consider him a world champion 2008 because he deserved that title here in Sao Paulo. So, I think what I can say is that he has always shown his dedication to the team, to the Ferrari family and we