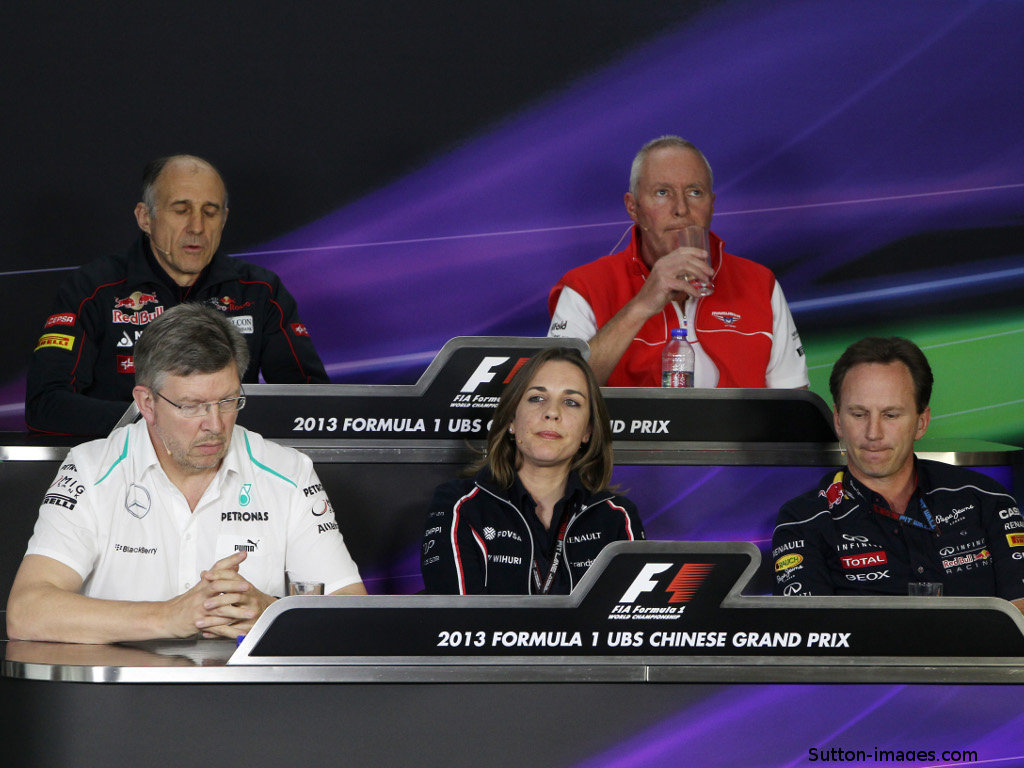 Q: Claire, how have your duties changed within the team?

Claire Williams: First, thank you very much for having me here today, I feel privileged to be sitting among such amazing company. They haven’t changed hugely. My primary focus has always been the commercial side of the team – to get the budget in, to keep us going racing. That won’t change, that will remain my primary concern. Obviously with the Deputy Team Principal title comes some responsibility for the technical side of what we do, so I’m going to be working with our technical director Mike Coughlan to ensure we have the resources we need to get us back up to the top. And then inevitably there’s the governance side of the role as well, so working with FIA/FOM issues.

Q: So how does the team structure work now?

CW: It hasn’t changed hugely, as I said. We have a board at Williams made up of an executive committee that runs the team and the wider business on a day-to-day basis. That doesn’t change but personally I suppose I will be going to every grand prix, so that’s a slight change. I used to before. Frank is still our main leader and that doesn’t change.

Q: Christian, you might have hoped that Malaysia was dead and buried and we could moved on but your driver has reignited the subject by saying that he doesn’t apologise for winning and that he would do the same again. Where does management stand on this?

Christian Horner: You don’t want to talk about Malaysia the race, or the pitstops or anything like that? In Formula One you’re always going to have a conflict between a drivers’ interest and a drivers’ championship and a constructors’ world championship and I think unlike other sports you don’t have those two elements going on at any point in time. Of course from a driver’s perspective, the drivers’ championship is everything to them. Sebastian made clear his position yesterday, some of the rationale behind that. As we’ve always known, the position between our two drivers, there’s never been too much love lost between the two of them and it’s a situation that’s been clear for probably the last four to five years. It’s something that we’ve managed and during that time we’ve still go on to score over 2000 points, 35 grand prix victories, six world championships. So within the team it’s nothing new. Obviously it’s a bit more public, it’s a bit more interest for you guys in terms of what’s going on but as far as we’re concerned it’s business as usual. I think, as far as team orders goes, what’s happened, happened. Sebastian’s explained himself, he’s explained himself to me. He’s apologised to myself and every individual in the factory and the issues been dealt with. We move on and focus on the challenges of this weekend.

Q: Has he basically been given the green light by the fact the team owner and his advisor have said that there are no team orders?

CH: Well just to be clear, I sat down with Dietrich (Mateschitz) after the race and discussed at length with him what happened in Malaysia and Dietrich is a purist, he’s a fan of the sport, he’s a… through Red Bull I think, y’know, Red Bull is clear in its intent that it wants to support competition and Red Bull athletes across all different categories of sport. Of course in Red Bull Racing we also have a team. So there exists that conflict of what the drivers want and what the team wants. The purist obviously wants to see the drivers race and race wheel to wheel and in fact as the drivers have done on many, many occasions. Sometimes you get instances that you have to deal with. Our primary concern in Malaysia wasn’t the two drivers racing each other, it was the fact we were concerned about tyre degradation from all the information that we’d seen prior… during that weekend in terms of managing the race to the end of the race with the least risk possible. Of course the call that we made at that point in time didn’t suit what Sebastian’s intent was and therefore you end up in this conflict between driver desire and the team’s position and it’s something we’ve discussed, it’s something we’re clear on going forward where of course we will trust the drivers. We will allow them to continue to race each other, they will have the information, they will know what they need to do with that information.

John Booth: It does play a part. Our shareholders want to see us going forward and we have to show that progression. We’re very pleased with what we’ve produced this year. We’re 170 people in total in Marussia and we’re very proud of what we’ve produced – but we have to keep working and keep pushing forward. Our shareholders expect us to go forward.

Q: Tell us about Pat Symonds’ contribution to this year’s car and also his influence at the circuits?

JB: Pat’s only been coming back to the circuit this year, made a couple of appearances and very welcome too – but I rather hope he stays at home more and makes the car go quicker that attending circuits. He’s a massive influence in our drawing office: brings a lot of discipline, a lot of knowledge and a lot of experience, particularly with the wind tunnel programme that we’ve been pushing on with for the last 18 months. It’s made a massive difference to us.

Q: Franz, a new technical structure headed by James Key, tell us about the changes.

Franz Tost: There were a lot of changes from the technical side, from the personnel side. James reshuffled the team, he bought in much more people in the aerodynamic department – in the wind tunnel as well as in CFD. He also brought in some more people in the design office and the way, the method of working has changed as well. I’m quite positive and convinced we are on a correct way and I also expect a successful season because James has built up quite a strong team around him and as you can imagine it takes a little bit of time. But I think from the middle of the season onwards all the positions should be fixed and people will work concentrated and so far I must say the performance increases and I think we are on a correct way.

Q: And that goes hand-in-hand with the physical expansion at the factory as well?

FT: Yes. We built up the new composite building, which is finished now. That means we’ve bought in much more people in the composite department. We are producing now in-house the monocoque, the front wing, rear wing, nose, bodywork, the engine cover as well as the brake ducts as well as the floor and diffuser. That means we are much more flexible. The reaction times are much shorter and from this point of view, the team has really increased.