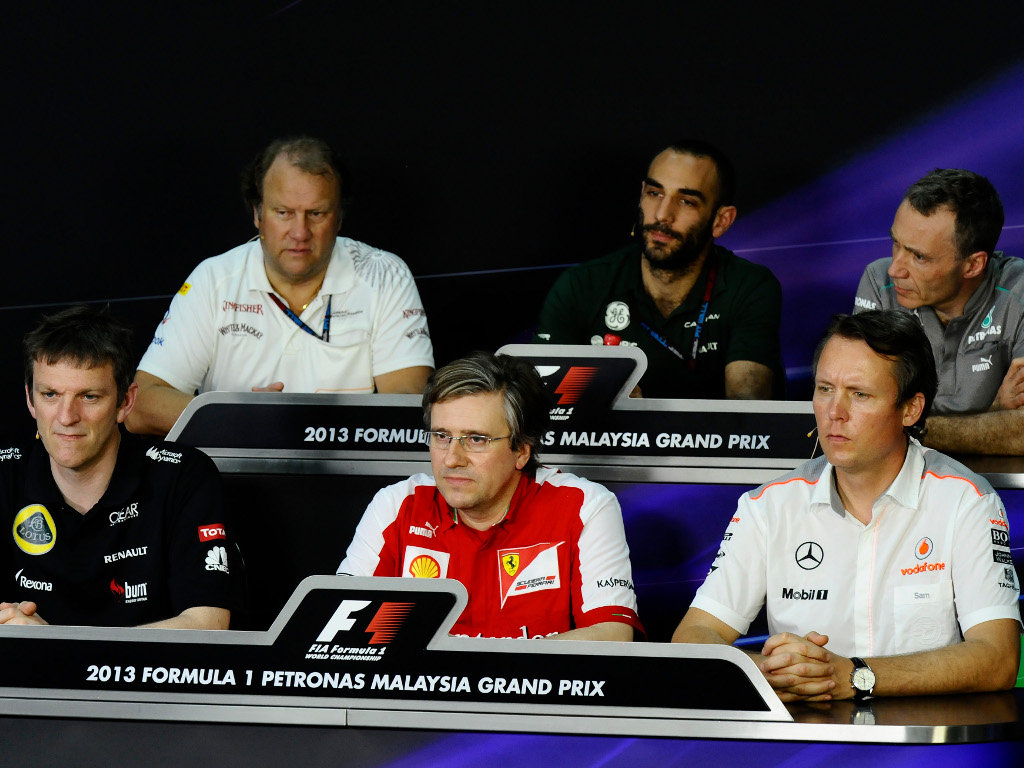 Q. James, can we start with you? A great win for you and the team to start the year off in cold conditions in Melbourne and from what we saw this afternoon can we conclude that you’re pretty quick in the heat as well?

James ALLISON: The weekend will tell but it’s been a good day so far and the car seems quite happy here.

Q. Is there any circuit that you fear from here?

Q. Will you able to maintain that development throughout the 2013 season against your main rivals?

JA: I think our team has got a reasonable history of keeping up with, and sometimes exceeding the general development race that happens during the season.

Q. Can you say anything about the way Kimi Raikkonen drove in Melbourne. There seems to be a surge of confidence really. He’s gone up a level has he, since last year?

JA: He’s certainly very, very relaxed and confident this year. He drove the race incredibly patiently. I think he knew he had a good car under him. He knew he didn’t have to scamper up behind the group in front and he looked after the tyres, only going quickly when he needed to. It was just a very mature and smooth, fast race.

Q. Bob Bell, last year the Mercedes was very good in cold conditions, perhaps less good at places like this. Have you addressed that with this car?

Bob BELL: Yes, I think we very much hope we have. We put a lot of effort in over the winter to really understand what the issues with last year’s car were. We had a pretty reasonable winter test in cold conditions. Of course Melbourne, as you said, was cold as well. We’ll see when we come away from here whether we’ve actually got on top of those issues. I think we’re pretty upbeat, pretty confident we’ve achieved that.

Q. What differences have you noticed in the way you’re operating as a team with the arrival of Lewis Hamilton?

BB: Lewis, no question, is a new dynamic for us and that always happens with the introduction of a new driver, particularly one as competitive as Lewis is, so he’s a real motivational force in the team and indeed for his own team-mate. I think he’s lifted all of our game. He’s driving us; he’s clear about what he wants, what direction he wants to go in, and that is sympathetic to where we were going anyway, so I think it’s going very well.

Q. What effect do you see he’s had on his team-mate Nico Rosberg?

BB: Team-mates naturally always want to outdo each other, so if you bring a new one in, if that raises his game then I think his team-mate will try and follow suit. It’s perfectly natural healthy competition.

Q. Pat Fry from Ferrari – second place finish in Australia, ahead of Red Bull. You’re leading the Constructors’ Championship going into this race. What was the feeling, the mood like in the post-race debrief?

Pat FRY: I think people were pleased with the race pace of the car. It was quite obvious that Kimi was going to be two-stopping. I think you could see him two seconds back from the group, as James mentioned. I don’t think we could have followed suit and competed on a two-stop which is why we went for the aggressive three-stop, which got us through the traffic. All in all, it’s one those… with that and the 60km/h pit lane limit, it’s always that balance between two-stop and three-stop. We weren’t brave enough to make the two-stop work. Kimi was, so good luck to them, or well done to them. We just need to keep on working on the pace of it. It’s nice being second but you always want to win don’t you.

Q. What are your thoughts about the pace of Lotus, the way they’ve started the season?

PF: It is very good. I don’t think we would have been brave enough to have attempted a two-stop there, so yeah, I think they’ve done well.

Q. Can you talk a little bit about the renaissance of Felipe Massa? Obviously he was strong in the second half of last year, he out-qualified Alonso in Melbourne and raced ahead of him for two stints. What is it that’s changed in him do you think?

PF: It’s hard to say really. He’s got a good attitude. He’s driving very well. Very sensible not overdriving the car. If you look at last year the first half was a bit of a struggle, the second half was a lot better and he’s continued that form into this year, which is obviously good for us as a team in the Constructors’ [Championship].

Q. We’ll come to Bob Fearnley from Force India. Force India obviously led the last race of 2012 in Brazil and you led twice in Melbourne last weekend en route to seventh with Adrian. What’s the outlook, do you think, for the year ahead?

Bob FEARNLEY: I think the Brazil race was on merit to a degree what we did in Melbourne obviously was tyre choice. It was very nice to be there but it was the result of strategy more than anything else. Overall, I think the performance of the car and team is quite good at the start of the season.

Q. And what was the problem for Adrian Sutil? We saw him in his shorts with half an hour to go.

BF: We had an oil seal problem. We just needed to stop it to make sure there was no damage to the engines.

Q. Can you talk a little about Sutil, his return from over a year out of a Formula One cockpit, very little testing. Were you surprised by his performance?

BF: I wasn’t surprised after his test in Barcelona. I think in Barcelona, when Adrian came in, if anybody could have put together a perfect assessment of a driver coming in for a test it was that occasion. I think Adrian did a great job and didn’t surprise me at all in Melbourne.

Q. Cyril, Caterham one of I guess three teams that were perhaps a little disappointed with performance in Melbourne – perhaps along with Williams and McLaren – what’s going on behind the scenes at Leafield that gives you confidence going forward?