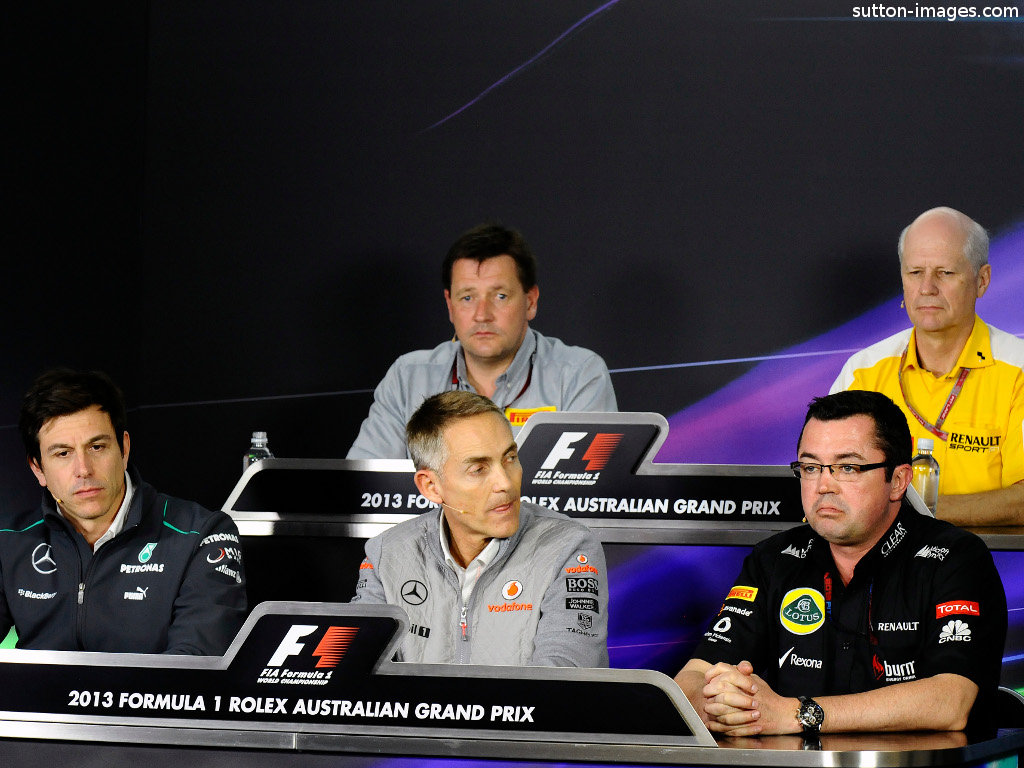 Q. Jean-Michel, after three very successful years in your partnership with Red Bull as the engine supplier, what are your objectives for this 2013 season? Another double world championship?

Jean-Michel JALINIER: Obviously to renew the success of the past year and win a new title or two new titles with our partner Red Bull.

Could it be quite a difficult season for you as an engine manufacturer? Whilst you’re keen to develop and progress the 2013 engine it is the last year we’ll be using that engine and you have a very big programme for 2014 ahead. How do you manage that balancing act?

J-MJ: Well, it’s correct that there is a challenge because we have to provide the right level of service and performance with the current engine and at the same time develop the new engine. And during the current year the staff of Renault Sport F1 are going to be allocated from V8 to the new engine progressively.

Q. Paul, an awful lot of data to go through after the first two practice sessions of the season. How happy are you with the way the tyres stood up to the demands of the Albert Park circuit today?

Paul HEMBERY: I’m really pleased, to be honest. After the winter testing, which was obviously not particularly good from a tyre perspective. To finally get running in the normal running conditions, we are pleased. We found that the medium tyre is lasting 22-24 laps which is what we needed. And the supersoft – very much a qualifying tyre here. You’ve got to your time in and probably do a short stint at the start and then you’ll be looking at a two, possibly three-stop strategy. From our point of view that’s in line.

Q. Do you feel the drivers might have to change the way they warm the tyres up, especially for qualifying with the supersoft, the changes to the compound and the construction? Do they need to be a little more gentle before they go for a flying lap?

PH: Well, we haven’t had the debriefing yet, that’s going to happen this evening to try and understand how it felt when they were doing quick runs and also when they were on the full fuel loads at the end, to do the start-of-race simulation. But at the end of the day the supersoft really is just intended as the tyre to do a time with and the main race will be held on the medium tyre. So we don’t see any particular issues.

Q. Toto, rather dramatic end to the second practice session. Explain to us what happened with Lewis Hamilton and subsequently Nico Rosberg as well.

Toto WOLFF: We got some good mileage on the car today but at the end we had some minor issues. We had a gearbox issue and a problem with the bib. So it’s not a big drama.

Q. On both cars, gearbox issues?

Q. And what happened to Lewis, driver-error?

TW: No, we had a slight problem on the bib, not a driver error, it caused some understeer and he went off.

Q. Off-track it’s been quite a busy winter at the team, changes to the management structure. Explain to us now who’s in place and who does what and who has responsibility for what.

TW: It’s pretty clear now isn’t it? We tried to keep you busy over the winter! The structure’s actually pretty simple. Niki [Lauda] has been the chairman of the board since a couple of months in a non-operational function. And I have been recruited, basically, to step in for Norbert [Haug] as the motorsports director, and equally in an executive function in Brackley for MGP. So I’m having two heads on, actually.

Q. And beneath you Ross [Brawn], as team principal, still has the same responsibilities as before?

TW: He’s not beneath me, it’s a different position and he’s team principal, he stays the team principal and he’s responsible for the racing. It didn’t change to last year.

Q. Eric, Lotus, how do you fare from today’s two practice sessions? How pleased or otherwise are you with your performance?

Eric BOULLIER: I’m pleased because obviously we had to fulfill our testing schedule for today, so no issue and we could go through everything we wanted to test and obviously understand. Performance is not so bad, I have to say, so happy and pleased with where we are. Obviously there’s still a lot to learn from tyres and obviously the rest of the weekend, maybe the wet forecast is obviously another challenge coming.

EB: Definitely. We have the budget in place. We have already anticipated the split from the resources we have to put on the 2013 car and obviously the 2014 challenge, so now everything is in place.

QUESTION FROM THE FLOOR

Q: (Kate Walker – Girl Racer) Question for the three of you in the front row: going back to the issue of sponsorship, but away from the broadcasting and TV rights, to what extent has the financial crisis affected your ability to pull in sponsors? We’ve seen Burn come in, Glaxo Smith Kline, Blackberry but there have also been a few high profile losses. Toto, I’m particularly interested in your response because you’ve seen this through both Williams and Mercedes. Is there a difference at the front end of the grid to the back?

TW: I think it’s – as I said before – a tough environment. I’m in a totally different place than I was last year and it helps to kind of give me a good perspective as to how important it is for us all to push for the sport and not just go flat out in an opportunistic way for ourselves. So yes, the financial crisis and the economic environment has a big impact. If big corporations have to scale down their investment, marketing or sponsorship is probably the first thing that you’re looking at, but I guess the sport is in good form and good health. It’s cyclical, it’s going to come back, maybe in a different way, in a different form, maybe different kind of partners and as you said, we have seen Coca Cola coming into the sport; Blackberry, obviously, with us, has been a very important milestone for the team so I don’t feel so depressed for the sponsorship market but we have to be very careful and look at the situation and we can’t, as I said before, we can’t just look after ourselves, we have to look after all the teams and try to keep the sport healthy.

EB: I think that for me it’s a little bit more complex. The world economic situation doesn’t help because every company still looks at their budget and obviously how it is spent. The funny thing about the situation is that Formula One is attractive today to a lot of companies and