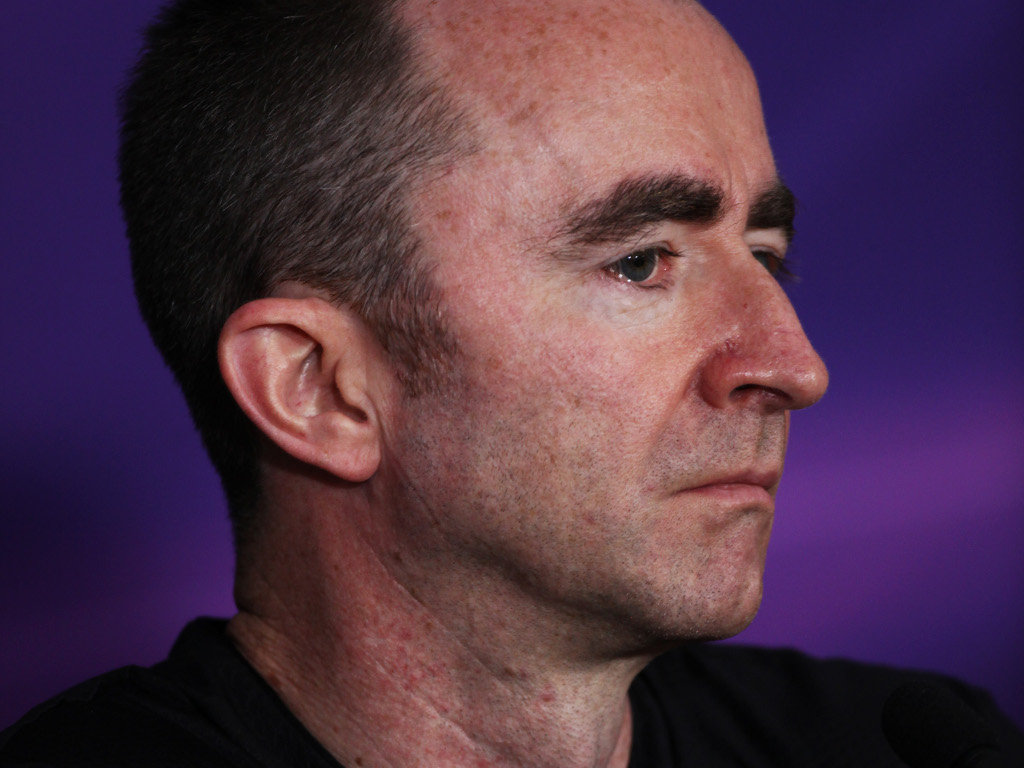 Q: Paul, can I start with you, and welcome back. Can we recap? We saw what happened at Silverstone, we know the changes that have been introduced with the tyres. Logistically, how big a challenge has that been for Pirelli? Also, tell us the reasoning behind the changes here and at future races this season?

Paul HEMBERY: Just to recap, at Silverstone we’d underestimated the impact of swapping the tyres. The cars were two, maybe three seconds quicker this year. Whilst we’d allowed the teams to do that, we’d underestimated the impact on the tyre. When you swap them around that creates a point with the metallic belt that we have on it, on the left-hand side, the camber side, and that created the weakness. We got that wrong and we needed to get it right going forward. So making changes, coming here the metallic belt has changed to an aramid belt, which is something the teams tested briefly in Canada. And going forward further again, we’ll introduce the 2012 structure with this year’s compounds for subsequent races. Logistically, yes, very, very tough. Obviously back-to-back races and our team in Izmit in Turkey have performed a few miracles, working flat out, as you can imagine, to get here, ready to race this weekend.

Q:Can you put a figure on the amount of tyres you’ve had to produce in the 48 hours?

PH: I think it was about 1000, something like that. We had a few maybe in stock but we had to produce them. But they work very well and we have to give a lot of credit to them.

Q:Pat, a difficult morning for you and one half of the garage at Ferrari. What was the problem with Fernando’s car and how much did you lose by the lack running?

Pat FRY: Well, I think every time your car doesn’t get out on the track you lose out really. We had a reasonably full aero programme that we effectively had to give up on. We did a little in the afternoon but nowhere near as much as we wanted to. It’s just one of those silly little electrical problems. It takes you a while to work what’s wrong and by the time you do it just takes too long to sort out.

Q:Do you feel Ferrari have lost performance with recent developments and upgrades and if so how easy it to fix that decline?

PF: It is a development race all through the year isn’t it. We’ve brought some good upgrades and there’s some that have been a little bit more temperamental that we’re trying to understand. So again you would have seen there were different specs of car running here again in each side of the garage in the morning and in the afternoon.

Q:Tom, if we can turn to you. Silverstone was your third points finish of the season. It’s a vastly different situation at Sauber to last year. What exactly is the problem?

Tom McCULLOUGH: Well obviously last year we started the year very strongly, scored a lot of points at the start of the season and moving to the end of the year we weren’t quite as competitive on a regular basis. The start of this season has moved us a couple of positions in the team ranking from a competitiveness point of view and that very quickly drops you out of the points. So as opposed to fighting in the points, you’re just dropping out of the points. We’re working very hard with the car to improve it to try to get back into the points-scoring positions on a more regular basis.

Q:As a member of the engineering department, how restricted are you by resources as you try to develop the car to make it go faster?

TM: You always have to work within your budgets, from a technical point of view, where you’re pushing very hard on the correlation side to understand the car as well as we can do. We have an update package coming for the next race, which we’ll be evaluating at the next test. So we’re still pushing very hard and obviously the more you can push the better.

Q:Sam, McLaren’s problems have been well documented this season. As it stands at the moment, how much of your resources are focused on the 2013 car compared with next year’s 2014 project?

Sam MICHAEL: Well the 2014 car has been in development for a good nine or 12 months now. As with all teams, you’re just balancing up how much resource you put on that versus this year. We’re still developing this year’s car; we still have parts coming for it. We’ll definitely do that until the shutdown – which is only three weeks away. I think once we get back we’ll see what the competitiveness is like around sort of Monza, Spa, Singapore and then make a call on how long we keep pushing on that. At the moment we’re working on both cars. There’s still of lot of things… although the actual components wouldn’t directly carry over, the understanding of the flow mechanisms around the car is still valuable.

Q:So if results improve, it’s worth persisting with this year’s car. If they don’t, by the time we get to Singapore, is that where you say ‘no, we’re going to switch the focus to 2014’, a season Martin Whitmarsh, your team principal, has already said is a very important season.

SM: Probably, you would – it’s probably going to be based on those factors. You’ll be looking at correlation, seeing if the parts you bring, over those two or three races post-shutdown work, and work strongly, and start giving you results you might continue. But it depends how much carries over. Probably the piece that carries over the least is the exhaust because it’s so different to next year and not relevant. Most of the other parts, as I said, even if they’re – of course they won’t be the same bits of carbon but the actual academic studies that you’re doing in the company are still valid.

Paddy LOWE: Thank you very much.

Q:Good to see you here.

Q:Lovely to see you in the paddock. How do you fit into the existing structure, into the technical director structure at Mercedes? What are your day-to-day responsibilities?

Q: Have you cast a fresh pair of eyes over the 2013 car and identified areas where improvements can be made?

PL: Yeah. I’m looking at the very short term as well as into next year and how the organisation is structured as well. So, wherever I can help immediately, I am. But there’s no particular focus.