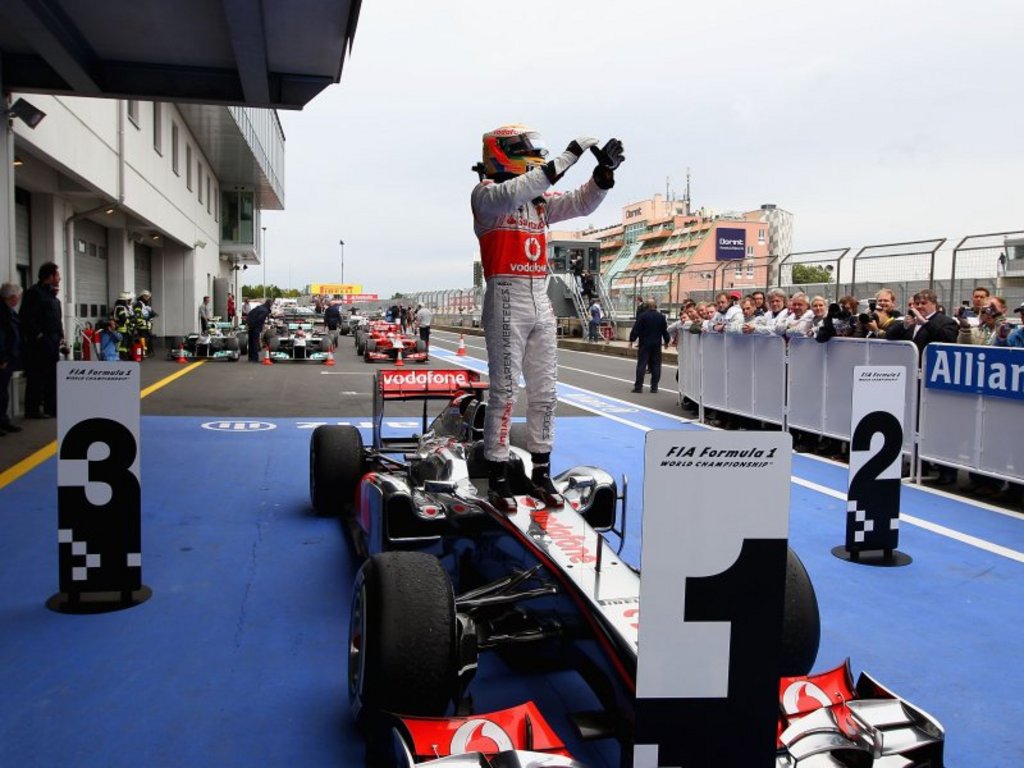 Lewis produced an immaculate display at the Nurburgring, but holiday bookings for 2012 are down…

The World Championship may not be back on after the Nurburgring, but the next few races could be interesting – providing it stays at 15C…

Star of the Race
Lewis Hamilton, McLaren, 1st
One of Lewis’s finest GP weekends, he made the most of a car that in Jenson Button’s hands looked the third quickest on the grid. Following the perfect qualifying performance he drove a faultless race with flashes of sheer brilliance, never once stepping over the boundaries of unacceptable behaviour.
The front three rapidly became a class of their own divorced from the rest of the race, and till Lap 50 there was just 7.3 seconds in it. You kind of knew that the moment that Eddie Jordan did an in-depth feature on where McLaren’s season had all gone wrong they would win. This time it wasn’t thanks to rain or opportune Safety Cars it was down to sheer grunt and peerless car control.
But it did help that it was cold.

Overtaking Move of the Race
Lap 33, Lewis Hamilton, McLaren on Fernando Alonso, Ferrari
This was an overtaking move that could have won Lewis the race (had he not been so good on the Prime tyre later on). Alonso looked to have got the jump on him in the second round of pit-stops and went into Turn 1 with an advantage that Lewis had managed to keep when Mark Webber tried it round the outside. Lewis slotted round the outside of the Ferrari at Turn 2 like his McLaren was on rails. When Fernando sees the replays he will be shouting “Aye carumba!”

Fernando Alonso, Ferrari, 2nd
Alonso pressed Hamilton all the way and for a lot of the race looked like the eventual winner. When Hamilton put in a series of three fastest laps between Laps 34 and 36 it seemed as though Lewis had sucked too much life out of his Option tyres too early in the stint and that he would fall victim to the remorseless Spaniard as the gap shrunk to 2.0 seconds before Lewis’s final pit-stop (no, not 2.7 seconds Martin, it went 3.1, 2.9, 2.8, 2.4, 2.0, and then he came in).
Ferrari will be pleased that they looked considerably stronger than Red Bull for the second race running. And there are few high-speed corners in Hungary.

Mark Webber, Red Bull, 3rd
It would be interesting to find out how Webber’s record of no wins from five poles stacks up against the least successful polesitters of all time, but it must be way up there. On the face of it, third from first (again) is not very good. But at least he had a go at overtaking people and he was almost half a lap in front of his team-mate.

Felipe Massa, Ferrari, 5th
Fifth is no shame for Felipe, it would have been fourth if his pitcrew had got their finger out.

Losers
Sebastian Vettel, Red Bull, 4th
A great day for Seb’s doubters and detractors, he took the majority of the race to get past Felipe Massa and, in the end, had to rely on his pitcrew to do it for him. He was outwitted at the start by Alonso, made errors in the race and showed that when it comes to getting muscular on track, he couldn’t do it. Massa didn’t have to work too hard to keep him behind.

Mercedes, 7th and 8th
Yet again Jenson Button’s retirement made the Mercedes result look not quite as bad as it really was. Effectively they were 8th and 9th at their home GP and if you’d asked Herr Dr. Norbert Haug at the beginning of the season if that would have been good enough at their home race, then I think the answer would have been a definite nein.
Given that they tend to generate too much heat and eat up their tyres on hot tracks you’d have thought they’d been on top. Maybe they’ve resolved that problem just in time for the race at the Nurburgring – or, as Channel 4 News described it – Nuremburg. Certainly their senior personnel might face a bit of a trial after this latest performance. Neither driver could outpace customer team Force India and Michael Schumacher had a careless spin en route to his 9th place. He almost met up with one of his twin Nemesises, Vitaly Petrov, at the Veedol Chicane. In the slo-motion camera they have there you could actually see his front wing wince. But it did survive…

Jenson Button, McLaren, DNF
Useless qualifying, useless start, good recovery, useless hydraulics. The only good thing about the retirement was that it happened to Jenson’s car and not Lewis’s. Because you could have imagined how far the toys would have been flung if that had been on the No.3 car…Belgium, probably.

Nick Heidfeld
Nick is becoming a serial victim of F1 carelessness. In Canada, Kobayashi lazily forgot to accelerate out of a turn and Nick ran into him. In Germany, Sebastien Buemi only bothered checking one mirror into the Veedol Chicane while Heidfeld was filling the other one.

Eifel Mountains Tourist Board
Fancy a nice summer break in Germany? Why not try the Eifel Mountains – no need for sun cream, Hawaiian shirts or swimwear, take a fleecy, four layers and a thermos. This has got to be one of the coldest GPs of all time. Timo Glock said he’d turned up for a race in May at the Nurburgring and it had been snowed off. The teams had to dig out all their clothes from testing in January (except that is usually warmer) and even then they froze.

Pirelli
Thanks to some negative adverts in Italy by Pirelli’s rivals – citing their poor F1 longevity – we’re seeing the tyre manufacture starting to harden up their compounds. Very soon if we’re not careful we’ll be back with tyres as useless as the appallingly conservative Bridgestones and have races where Sauber run a set of super-softs for 63 laps.

Eddie Jordan’s Quote of the Race
Talking about why there were six German drivers on the grid
“Michael Schumacher turned this into a car steeped in F1 talent…”
He meant “country”.

Martin Brundle’s Quote of the Race
“The 107% rule is a bit of a mute point.”
Blundell would have been proud. Or should we say, “prahhhd”.