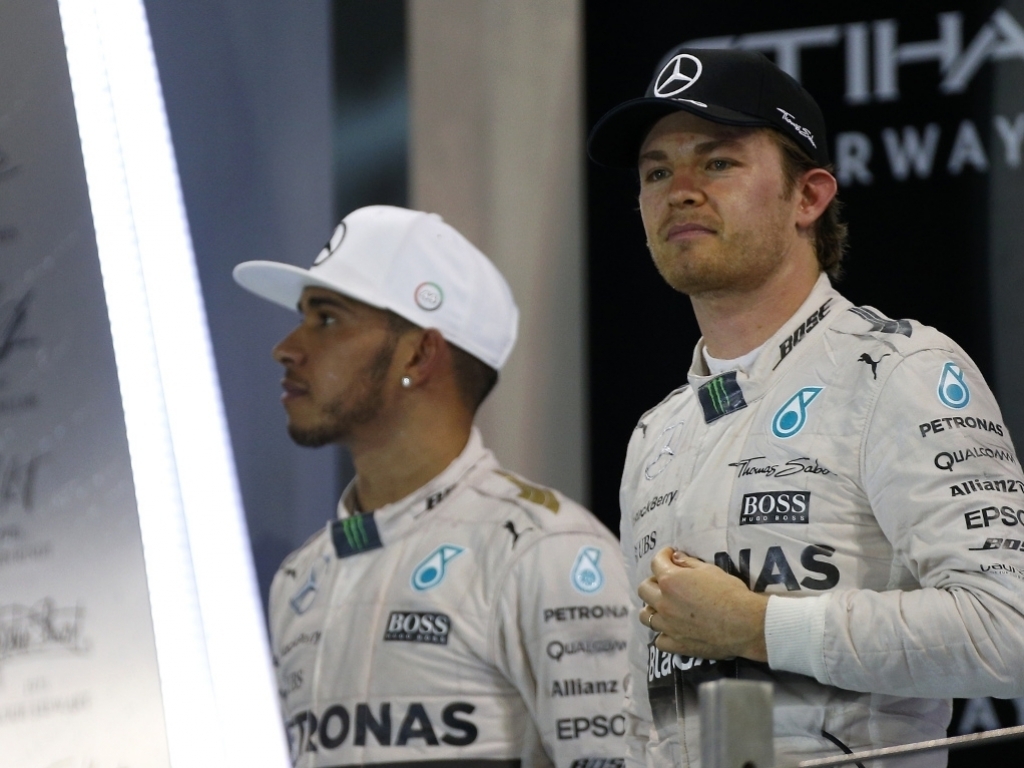 Nico Rosberg, maiden hat-trick
For the first time in his Formula 1 career Nico Rosberg has a hat-trick of wins to his name. And he did it in fine style.

The Mercedes driver turned his sixth pole position into a flying start, storming away from Lewis Hamilton to build a lead of over five seconds. And although Hamilton came back at him, reducing the deficit to a second at one point, Rosberg took the chequered flag by eight seconds ahead of the World Champion.

If he can carry this form into 2016, Formula 1 may yet be in for an exciting campaign.

Kimi Raikkonen, third top three
A P3 on Sunday was a good end to a mediocre season for Kimi Raikkonen. One can’t say much about his Abu Dhabi race as it was a lonely one, not fast enough to challenge the Mercedes cars but quick enough to keep his rivals firmly at bay.

Raikkonen remained unruffled when a slow pitstop cost him time before racing to third on the night, his third podium of this season.

Sebastian Vettel, recovered
Sebastian Vettel and Ferrari botched qualifying, there’s no other way to put it. They believed his time was good enough to get him into Q2 and they were wrong – and not for the first time.

The German, though, put that behind him on Sunday as he stormed through the field, using a long first stint to ensure a short final one in which he overtook two drivers to take P4. A solid showing and yet another demonstration of Ferrari’s improved pace

Sergio Perez, best of the rest
Prior to the Abu Dhabi Grand Prix Sergio Perez billed this as his “best” season in Formula 1 and he capped it with a fantastic P5 on Sunday night.

The Force India driver was the best of the rest behind Mercedes and Ferrari throughout the weekend, taking advantage of Sebastian Vettel’s qualifying mess to grab fourth on the grid. He followed that up with a P5 in the race, only losing out the Ferrari driver late in the race.

It was a great end to the season for the Mexican racer, who has finished the championship P9 and an impressive 20 points ahead of the much lauded Nico Hulkenberg.

Romain Grosjean, two points for goodbye
It was a trying final weekend for Romain Grosjean and the Lotus team as their freight was late to arrive due to financial troubles and then his E23 had not one but two reliability issues, a water leak on Friday and a gearbox issue on Saturday. The latter led to a five-place grid penalty and Grosjean began his Lotus swansong from the back of the grid.

But by the end of the race the Frenchman was racing his way into the top-ten, taking first Carlos Sainz and then Daniil Kvyat on the final two laps.

It was a fitting goodbye to the Lotus team from the Haas-bound driver.

Sitting On The Pitwall
Lewis Hamilton, 44 is stuck on 43
It is difficult to put the driver that finished P2 into bad race but given that Lewis Hamilton will enter the 2016 season having not won a race since wrapping up the title in Austin, it wasn’t exactly a good end to the season either.

Blaming changes to the car and uncreative strategies for his lack of victories of late, Mercedes let Hamilton chose which rubber he wanted to be on for the final stint in Abu Dhabi. Despite only needing the tyres to hold up for 14 laps, he went with the softs instead of the supersofts – he wasn’t able to catch Rosberg.

It was a strange call and one that Hamilton actually says was made by Mercedes: “I let the team make the call as I didn’t know what was the right one.”

But whoever is to blame, Toto Wolff says it was the right call as the supersofts would not have held up for that many laps. Tell that to Sebastian Vettel, who covered 16 laps on the supersofts and stormed past two rivals.

Bad Race
Valtteri Bottas, nosed his way out of P4
Valtteri Bottas entered Sunday’s season finale chasing fourth place in the Drivers’ Champion, in the end he was chasing his tail.

The Finn’s race came undone when he was released into the path of Jenson Button. Tagging the rear of the McLaren, Bottas’s front wing was broken and he spent a slow frustrating lap working his way around the track and back into the pits for repairs. He was rightly penalised – a five-second time penalty – and with Kimi Raikkonen finishing on the podium kissed P4 goodbye.

Adding insult to injury, Williams’s head of performance engineering Rob Smedley has blamed Bottas. “We released him at the right point but unfortunately he saw the McLaren too late,” he said.

Max Verstappen, a rookie’s race
Some races he’s a champion in the making, others he’s a rookie learning his trade. Sunday’s grand prix was the latter for Max Verstappen.

Slicing his way through the field he was on course for another good points-haul but a flatspot – no one’s fault but his own – meant changing from a two to a three-stop strategy. He was then handed a five-second penalty for overtaking Jenson Button off the track while a post-race drive-through penalty for ignoring blue flags – the equivalent of 20 seconds – meant he finished P16.

Added to that he is up to eight penalty points, just four away from a one-race ban.

Not the best way to finish his debut season but it will be do little to tarnish the Toro Rosso rookie’s reputation.

Fernando Alonso, rather retire than suck
It was not Fernando Alonso’s weekend in Abu Dhabi. On top of a car that is not all that quick and only some times reliable, he suffered a puncture in qualifying and was involved in a first lap collision during the race.

Tagged by Felipe Nasr, Alonso hit Pastor Maldonado through the first corner. The McLaren driver not only had to pit for new tyres but was blamed for the crash and was slapped with a drive-through penalty.

Lapping at the back of the field, he threatened to retire the car saying: “If we don’t get a safety car I will retire the car.” In the end he stayed out, completing the season finale down in 17th place with only the Manor drivers behind him.

Pastor Maldonado, the only DNF
All too often this season, in fact in his career, Pastor Maldonado has been the cause of other drivers’ retirements. This time around he was the hapless victim.

Smacked by Fernando Alonso on the opening lap, Maldonado’s E23 was unable to continue and he became the race’s first and only retirement.