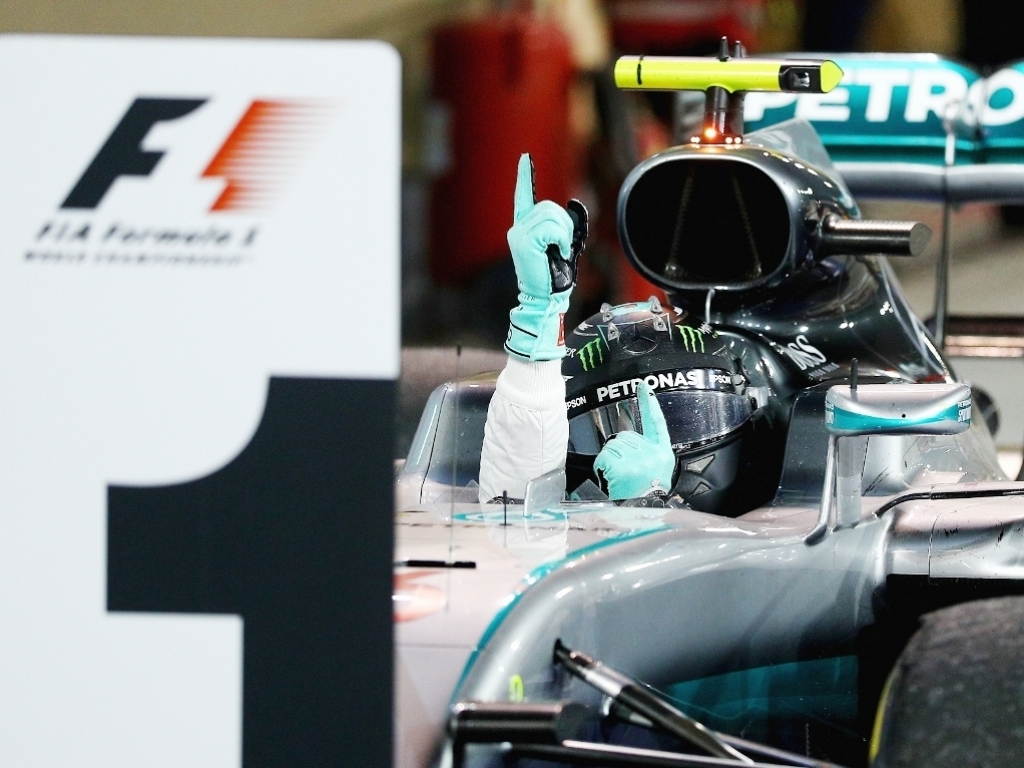 Rosberg’s Got That Winning Feeling
For the second race in succession Nico Rosberg was pipped to pole position by Lewis Hamilton but that did nothing to slow his charge on Sunday night. The German stormed off the line, taking the lead off his team-mate while behind him there was chaos. Rosberg took full advantage of that to etch out a lead of over 10 seconds after just 10 laps.

And although Kimi Raikkonen launched an attack in the closing laps – taking the gap down to less than four seconds – Rosberg did not put a wheel wrong as he raced to an unchallenged victory by 10s over the Ferrari driver. He also lapped everyone up to and including seventh placed Daniil Kvyat.

Rosberg has now won five on the trot, has a 100 percent record for this season, and leads the title race with 50 points to Hamilton’s 33. And he’s showing absolutely no sign of cracking.

That’s Number Eight For Kimi
Ferrari say had it not been for Kimi Raikkonen’s slow start he could have possibly won the grand prix. The Finn says “we had pretty good speed” but that it was “not enough to win.”

Either way Raikkonen finished P2 at the Bahrain Grand Prix, adding to his ever-growing collection of Bahrain podiums. He now has eight in total – and none are for a victory.

And as many have pointed it, ironic that one of Raikkonen’s best tracks is one where rosewater replaces champagne.

P4 On The Day Hands Ricciardo P3 Overall
Daniel Ricciardo raced his RB12, still powered by a Renault engine but one that is disguised as a TAG Heuer, to fourth place on Sunday night. It was a fantastic result in a car that on most days is not one of the top three machines. On top of that, his RB12 was damaged on the opening corner of the grand prix when he clashed with Valtteri Bottas, losing a sizeable chunk of his front wing.

The Aussie is P3 in the title race.

Grosjean Heading Towards The Podium
P6 at the Australian Grand Prix may have been a fluke result given that the red flag stoppage played a role. But P5 at the Bahrain Grand Prix was anything but.

Romain Grosjean qualified well on Saturday, lining up ninth on the grid, and 57 laps later was fifth as he took the chequered flag. He was one of only five drivers that Nico Rosberg did not lap, proving that in the VF-16 Haas really do have a car that can run with the big dogs.

At the rate he is going, Grosjean should be on the podium come round four in Russia.

Max’s Frustration Turns To Praise
What a difference one race makes. Last time out in Melbourne Max Verstappen was furious with Toro Rosso, cursing the team with several choice words as he was unhappy with the strategy and the pit stops. This time around in Bahrain, he was praising the team for “a great strategy, good pit stops.”

Verstappen put aside his Australian GP frustrations to race to sixth place on Sunday, engaging in several tight battles along the way. He was the last driver not to get lapped by Rosberg.

Vandoorne Proves His Point
Called up to replace Fernando Alonso at the last minute, Stoffel Vandoorne took his time adjusting to life in Formula 1 in Friday’s practices. By the time Saturday’s qualifying came around he was two places ahead of 2009 World Champion Jenson Button and at the end of Sunday’s 57-lap race he was in the points, scoring McLaren’s first of this season.

Do not listen to anyone who tells you the Belgian’s P10 is a sign that F1 is too easy. Rather it’s a clear indication that this chap has all the talent required to excel in Formula 1. He just needs a permanent seat.

A Promising P13 For Wehrlein
Arriving in Formula 1 on the back of his DTM triumph, Pascal Wehrlein has quickly settled in to life at Manor showing the potential of the team’s Mercedes-powered MRT05.

He qualified P16, one position away from Q2, and raced his way to 13th place at the flag, tussling with the Force Indias, Saubers and Renaults along the way.

Don’t be surprised if Wehrlein makes his way into the points before his debut season concludes.

Sitting On The Pit Wall
Hamilton Takes The Good With The Bad
It’s not always that it can be said that a driver finishing on the podium had a bad race but that’s exactly what Lewis Hamilton had on Sunday night.

Once again the pole-sitter failed to make a smooth start, which dropped him behind Rosberg and into the clutches of his rivals. That resulted in a collision as Valtteri Bottas went in too hot and tagged Hamilton’s Mercedes.

That was the bad race part.

Despite driving with a damaged car – which Toto Wolff estimates cost him around “one second” per lap – Hamilton raced to third place on the night.

And that was the really good part.

Bad Race
Vettel’s Race Gone In A Puff Of Smoke
Having qualified P3 for the Bahrain Grand Prix, Sebastian Vettel was hopeful of a good points-haul and perhaps even the prospect of challenging the Mercedes for the win. It was not to be.

The German’s Ferrari engine blew in spectacular fashion on the formation lap, leaving Vettel nothing more than a spectator at a grand prix where so much was possible.

Button’s P5 Dream Breaks Down
Jenson Button’s weekend began in fine form as he finished P3 on Friday night, raising hopes of a great result. He was brought back down to earth 24 hours later when he qualified outside the top ten. Making matters worse, he was also two places behind debutant Vandoorne.

Adding insult to injury, Button retired from the grand prix on lap 7 while Vandoorne raced his MP4-31 to tenth place thus scoring McLaren’s first point of this season. The Brit reckons P5 was on the cards had he completed 50 more laps.

The result raises questions about whether McLaren made the right call in their 2016 driver line-up.

Force India Wing-Less In Bahrain
Two laps, two damaged cars – it was a nightmare start to the Bahrain GP for Force India.

Nico Hulkenberg failed to maximise his P8 grid slot, got caught in the scrum for track position and damaged his front wing. Sergio Perez followed his team-mate in the pits a lap later as he broke his front wing on Carlos Sainz’s rear tyre.

No Glory For F1 Bosses
At a time when Formula 1 really needed the bosses – teams, FIA and FOM – to come together for the good of the sport, Sunday’s meeting regarding qualifying yielded nothing more than a Thursday meeting to discuss qualifying (again).

Wait, it gets worse…

On the table for Thursday’s meeting is a proposal for aggregate qualifying. Sound familiar? That’s because it is. Formula 1 used it back in 2005 and after just a handful of races it was scrapped because no one liked it or could follow it.

Now it’s back on the table, go figure.